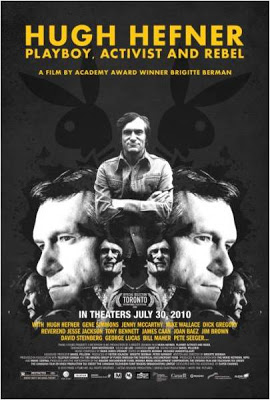 Thank you, Hefner…
We’ll take it from here.

Brigitte Berman’s new documentary, Hugh Hefner: Playboy, Activist, and Rebel, deserves attention. Read this great interview at Collider.com for more background on the process of the film and its conclusions. Go see it if you’re interested in sex, law, social justice, censorship, publishing, and/or sexy girls.

On the movie’s opening night, July 30th, I went to the premiere at LA’s Nuart Theater. Both Hefner and director Berman were in attendance, and they did a brief Q&A after the film.

As inspiring as the film was, the way Hefner has had to live on the defensive his whole life made me sad.

At this point, he’s no longer defending himself against the obvious enemies he had in the ’60s. Then, it was the conservative Christians, the censors, the people who were out-and-out afraid of crass depictions of sexuality. That the feminists of the time (Susan Brownmiller and Gloria Steinem, famously) also vilified him is fascinating, since he thought he was working on the same project they were.

But it’s even more complex now. The people who scoff at Hefner are people my age, who know little to nothing about his heroism of the ’50s, ’60s, and ’70s, and only see the caricature of male sexuality he’s become.

They don’t care about the way he flouted racist convention, and in some cases actual law, to have black performers on his show and in his clubs. They don’t care that he published Charles Beaumont’s “The Crooked Man,” a short story that questioned homophobia directly, when no one else would. He said during the Q&A that he thinks most people nowadays don’t acknowledge “the other half” of his life.

The implication here is heavy: one half of his life is women/sex/silliness/parties and the other half is intensely focused intellectual, creative, activist work. Much like the way they were presented in Playboy, Hef thinks of the naked girls as a very separate experience from the writing.

This is such a puzzle to me. On the one hand, it seems like he should have the right to be a sexual adolescent, to love big boobies and blondes, and spend his time on that. He’s a grown man with consenting women, after all. On the other hand, I agree with the criticism that Playboy became, in some very important ways, a dictator of sexual taste, and that it presents a limited view of what is sexy.

What’s clear from the film is that this restricted taste that has become so ubiquitous is actually Hef’s. It doesn’t seem as though he had a mission to tell all Americans what they “should” like, in fact. It seems as though he was a brilliant business man who happened to know exactly what HE liked. That Americans are sheep, media consumers, and easily told what their preferences should be based on what they see around them, is their own fault.

Someone with Hugh Hefner’s acumen for business and a different aesthetic might have changed the course of American sexuality. Maybe. Or maybe Hef’s desire for a certain hour-glass gal is just so mainstream because it is also a basic biological imperative the way symmetry in the face seems to be in cross-cultural studies of beauty.

Certainly a particular waist-to-hip ratio (.7) has been theorized as a beauty ideal in many cultures. If Hef was just tapping into some heterosexual evolutionary biology, what exactly could the feminists expect?

What’s beautiful about Hef’s current incarnation as an 84-year-old business tyrant (he’s buying the magazine back from stockholders to, one imagines, exert some more creative control), strangely self-effacing lover (see a recent LA Weekly cover story by Dennis Romero), and general eccentric is that he still seems happily committed to being authentic — he really does exactly what he wants to do, no matter what.

This I respect I great deal. I don’t share my generation’s disdain for the grandfather-aged patriarch of The Girls Next Door, because the sheer volume of good he’s done simply outweighs the potential done by his perpetuation of certain boring sexual aesthetics.

It’s up to us to derail those aesthetics, offer alternatives in media, and so on. What is also up to us, and seems to be the next big project that Hef may never attempt, is to do real integration of the “two halves” — to lift the barrier between sex and intellect. They existed side-by-side in early Playboy, but they didn’t exist as integrated whole.

So overall I think we should see Hef as we see the early feminists or civil rights activists. We can never forget what they accomplished. We wouldn’t even be able to think the thoughts we think now without them. But we can’t pretend that the important fights have all been won, or we will be just a new generation of culture-slaves. There’s always a new front for revolutionary thinking.

[Vanessa Carlisle is a writer, teacher, and performer who lives in Los Angeles. Now a doctoral student in Comparative Literature at UC Riverside, she studied psychology at Reed College, has an MFA in creative writing from Emerson College, and taught psychology at Emerson and Wheelock Colleges. She has danced with a neo-burlesque troupe and a Hawaiian lounge act. Her work has appeared in both literary and trade magazines, and her novel is A Crack in Everything. Her website is VanessaCarlisle.com and her blog is Gorgeous Curiosity.]