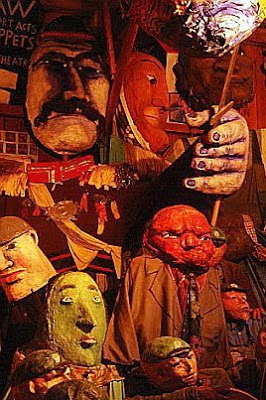 See “Boil those veggies!” by Janet Gilles, Below.

Anyone taking in the recent health care “debate” — in whole or in part — must surely need an antidote, and here it is: garlic! Garlic kills viruses and bacteria, supports the immune system, increases energy, lowers blood pressure, wards off vampires, and is the bane of schmoozing politicians.

You know that great yellow stuff you used to get smeared on your Bread & Puppet bread at performances* (now replaced for reasons unknown by garlic merely suspended in oil)? That stuff. What they make for the peasants in southern France and Italy: when they come in from the fields for lunch, they are handed a loaf of bread to rip apart and dip in a big, common bowl of God’s gift to sweat, and a full afternoon of hard work.

Here’s how you make it:
3 eggs
canola oil
1 head of garlic
salt

Separate yolks and place in large mixing bowl. Give the whites to high-cholesterol partners innocent of Lipitor.

Here’s the tricky part: Pray to the aioli gods.

Add oil, A DROP AT A TIME, to the egg yolks. I’m not kidding — a drop at a time, at least at the beginning. Bread and Puppet macho would have you whip the oil and eggs together with a fork. I cheat and use an electric mixer on low speed. Don’t tell Peter Schumann.*

As the volume of oil builds up, you will be able to add it more quickly, a couple of drops, then a few, then a very thin, intermittent stream. But WARNING: if you add the oil too quickly, the aioli will not “catch,” and you’ll end up with an oily mess. Patience, patience. Franz Kafka wrote:

He must have been a very good aioli maker. 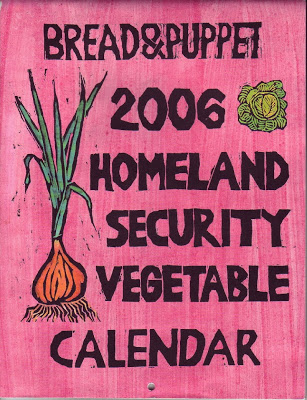 How much oil? Reasonable question. I’ll defer the answer.

The mixing bowl should now be filled with something that looks and feels very like mayonnaise. In fact, it IS mayonnaise. This is how you make mayonnaise. The funny thing is, once you get to a certain point, you can add oil much more quickly (but not too quickly), and make as much as you like. The yellow will become more diluted, but aside from that, you can plan to feed the multitudes if you have enough oil. Add loaves and fishes if desired. That’s how much oil.

Chop garlic into tiny, tiny pieces. Bread & Puppet macho insists you chop with a broad blade very sharp knife, then squoosh the pieces with the flat of the blade to squeeze out the final juice. When puppeteers aren’t watching, I use a garlic press.

How much garlic? Use the whole head, or just part of it? That depends on how big the garlic is, how much aioli you are making, and how strong you want it. I’ve never made enough to use more than one entire head — about half a large mixing bowl’s worth.

Mix the garlic mash into the waiting bowl, and stir in thoroughly. Add salt to taste.

Eating: Although you can eat it immediately, it’s best to let it stand, refrigerated for a couple of days. It mellows out into something strong and smooth, but not nastily fierce. Folks either love it or they hate it. Some stomachs can’t stand too much garlic without refluxing. You can give out Rolaids with the aioli to those folks. Best on fresh-baked hearty bread. 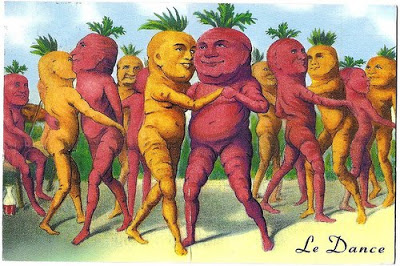 Boil those veggies!
(Then think Aztec: add cocoa and honey…)

The more vegetables the better is becoming settled wisdom. And my acupuncturist encourages me to boil them. The Chinese are not as dumb as everyone thinks, modern science just chooses not to investigate their methods.

So I buy whatever greens that look good at the farmers market, trim the best parts for salad, and boil the rest just until they wilt. You can bring the water or broth to a boil, turn off the fire and add the veggies. I like the bright green color the poached veggies will turn and try to catch that. Or boil them awhile if they are tough, adding some ginger if you have any.

Put hot broth and greens into a blender with some nut butter to make it milky and miso to give it body and salt; about a teaspoon of cashew, almond, or hemp butter, and a half teaspoon of miso per cup will make it really creamy, rich, and delicious.

To make a fine soup, add some lemon juice, garlic, and parmesan and serve hot or cold, with a dash of sour cream or croutons if you like. Also good with a few shavings of nutmeg. This soup makes an excellent beginning to any meal.

For breakfast, add honey and chocolate to taste. Yes, really!!! Think Aztec. About a teaspoon of cocoa powder and a teaspoon of honey per cup make a hearty breakfast drink. Having a lot of green vegetables on hand, and recalling that the Aztecs made chocolate drinks of their food, I have begun flavoring vegetable drinks with chocolate!! Delicious.