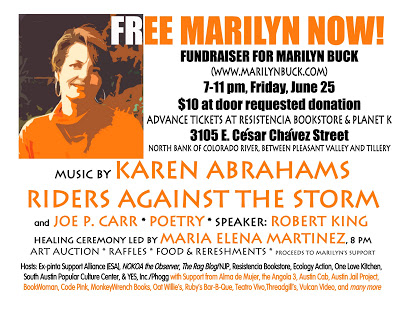 Join us in Austin this Friday:
Free Marilyn Buck Now!

A benefit for Marilyn Buck this Friday, June 25, will raise funds and gather healing energy for the former Austinite. Slated for release on parole this August, Buck was diagnosed with cancer late last year. Her plans for starting life over at age 62 now must be amended to allow for recuperation and healing.

Marilyn Buck, an award-winning poet originally from Austin, was convicted of politically-motivated crimes in the 1970s and 1980s. She has spent 25 years in prison. She earned two college degrees, taught herself Spanish in order to communicate with and for Latina prisoners, and organized AIDS education and literacy classes in prison. She won respect as a principled voice for the rights of oppressed people, especially women, people of color, and other political prisoners.

Benefit organizer Mariann Wizard shared a moving and personal tribute to Marilyn that appeared recently on The Rag Blog. The benefit will bring together those who knew Marilyn when she worked on Austin’s underground newspaper, The Rag (predecessor to The Rag Blog), and those who have only known of her as a political prisoner.

The benefit will take place 7-11, Friday, June 25th at 3105 E. Cesar Chavez. $10 at the door is requested and advance tickets are available at Resistencia Bookstore and Planet K stores.

If you can’t attend the Austin benefit, you can contribute to Marilyn Buck’s support by sending a check to:

Make sure to note “for Marilyn Buck” on the contribution.

King spent 32 years in Louisiana’s Angola prison, 29 of them in solitary confinement, for a crime he didn’t commit. King, Albert Woodfox, and Herman Wallace were active in the 1970s with the Black Panther Party while in prison, and came to be known as the Angola 3. An acclaimed BBC documentary, In the Land of the Free, narrated by Samuel L. Jackson, was released earlier this year. The film explores the facts surrounding the Angola 3’s incarceration.

Mariann Wizard joined Dreyer and King on the show to discuss Marilyn Buck’s case and the upcoming benefit. Tuesday’s program is now on the Rag Radio archives, and you can listen to it here.