Gambling on McCain : The Stakes are Big 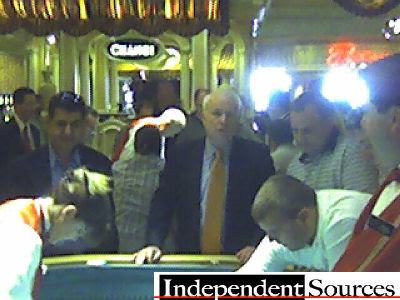 This is the first of several articles by Sherman De Brosse on John McCain and his shady involvements, past and present.

Senator John Mc Cain is known for his love of gambling and frequently engages in gambling marathons in Vegas. He is probably an addict with a serious problem. It is no secret, that he is given to taking great risks at the tables. Sometimes a gambling stint for him will last 14 hours. He does not gamble every day but is prone to monthly binges.

By all accounts, he gambles a lot, and Obama recently criticized McCain for gambling in a Connecticut casino with a lobbyist representing the Mashantucket Pequot tribe. At that time, he chaired the Senate Indian Affairs Committee, which oversaw Native American casinos. The Arizona senator should have refrained from voting on matters that affected that tribe.

However, the Senator, who gambles a few thousand at a time, tried not to take loans or markers from the house. So he is not entirely reckless, yet, some wonder if a legislator should be gambling in the casinos he regulates is proper. Forty of his fundraisers are in the gambling industry. Lately, to avoid publicity he has taken to playing craps in a private room, a right he has as a high roller.

Citizens for Ethics and Responsibility in Government filed a complaint with the Senate Ethics Committee on October 9, claiming McCain never reported on his taxes gambling losses or gains. Reporting losses should be a personal option. Yet it is bothersome that someone with so much influence in this area is not entirely open. Of course, the complaint will not be dealt with until long after the election.

Many of us have noticed over the years that gambling establishment seem to be more often linked with unsavory people than, say, dry cleaning establishments or donut shops. One might wonder what kinds of people Mc Cain meets in these dens for high rollers?

John and Cindy McCain are very rich people, so his gambling habit is not something that will take food off the family table. Some good psychologists claim it may not even be a major character disorder. However, a Swedish study suggests these gamblers are likely to be more impulsive than non gamblers and to be somewhat more dishonest. They are also inclined to extravagant behavior. Gamblers are somewhat less inclined than non-gamblers toward responsible behavior. We do not have enough iron-clad evidence to say McCain is a compulsive gambler. Decide for yourself if Mc Cain seems more impulsive and less responsible and truthful than most people.

Gamblers Anonymous says that compulsive gamblers have problems with emotional security, immaturity, and accepting reality. Think a little about McCain’s explosive temper, and you might see a connection.

Though his committee, oversees gambling, he does not recuse himself when gambling comes up. He oversaw the investigation of Jack Abramoff’s abuse of Native Americans, which resulted in helping Abramoff’s rivals — McCain’s pals — and also smited some folks in the GOP who had opposed McCain in 2000. He found that Abramoff and others took over $66 million from the Native Americans and promised to get to the bottom of the matter. But the investigation ended there and McCain let the “perps” walk because much of the money was funneled to his Republican Party. He did not even call Ralph Reed to testify, though the Christian Right was deeply involved in Abramoff’s abuse of the Native Americans. In 2008, McCain used Reed in his campaign.

Its up to the reader to decide if the man who has a hand in regulating gambling should be so close to the industry and then fill his presidential campaign with gambling and communications lobbyists. He also has a big role in regulating communications. It does not seem prudent. There is more than a touch of arrogance here. He seems to be saying that everyone should know that John McCain has so much integrity that he need not avoid appearances of impropriety. It is absolutely true that McCain has had a masterful publicity campaign running over more than two decades burnishing his image as Mr. Integrity, but an examination of the facts reveals many chinks in his armor.

Sources for this article.

Temperament and Character in Pathological Gambling / Journal of Gambling Studies

About the Problem of Compulsive Gambling / Gamblers Anonymous

1 Response to Gambling on McCain : The Stakes are Big