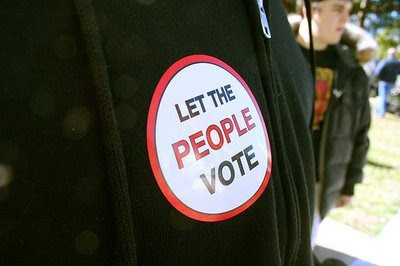 Image from Dog Canyon.
Likely Arson in Houston, and
Voter suppression from the Right

A mysterious fire last Friday destroys all of the voting machines in Harris County (Houston), Texas. Arson investigators have not yet issued an opinion.

Meanwhile, a well-funded right-wing group emerges in Houston and begins raising unfounded allegations of widespread voter fraud. A video on their website pictures only people of color when it talks of voter fraud. White people are shown talking patriotically about the need for a million vigilantes to suppress illegal votes.

In the video, an unidentified spokesman for “TrueTheVote” says, “If we lose Houston, we lose Texas. And guess what? If we lose Texas we lose the country.”

The former Mayor of Houston, Democrat Bill White, is running against secessionist Republican Gov. Rick Perry this year. White’s counting on a big turnout in his home town. The fire and the voter suppression campaign guarantee a greatly diminished turnout.

TrueTheVote’s video [see below] is well produced. Participants speak in calm and knowing tones, disguising the racist agenda behind their project. We don’t yet know where the group’s money comes from. But they have money.

As I’ve said before, right-wing voter suppression campaigns are the most under-reported political scandal of the last 50-100 years. But there’s never been anything like the criminal destruction of all the voting machines in the nation’s fourth largest city.

You don’t have to be a conspiracy theorist to suspect the machines in Houston were destroyed by an arsonist. Warehouses don’t regularly and spontaneously combust at four in the morning, especially warehouses containing all the voting tools in a pivotal city in a pivotal election.

Huffington Post contributor Greg Mitchell wrote one of the best accounts of such a suppression and intimidation campaign in his book about the 1934 California governor’s race, The Campaign of the Century. At least since then, voter suppression has been a part of nearly every election cycle. 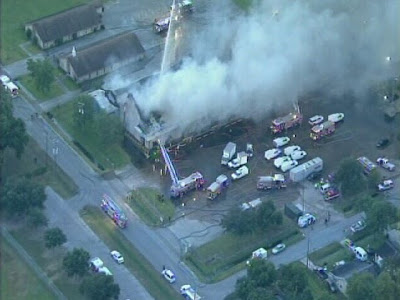 Voting machines go up in smoke in Houston. Photo from KRIV-TV.
There are simply no machines available to replace the loss of Houston’s machines. That means either a return to paper ballots (there may be very few scanners to count them) or a greatly reduced number of polling locations. The latter would require the emergency suspension of state law and run afoul of the Voting Rights Act. In any case, confusion will reign, and confusion reduces turnout.

For much of the country, Texas is a vast right-wing breeding ground. Actually, Democrats have nearly reached parity in the state House of Representatives. All the elected officials in Dallas are Democrats. Austin, too. Most of the judges and many of the officials in Houston are Democrats.

With a strong turnout in Houston, White could very well beat Perry. Without a national effort to counter the largest voter suppression effort in my memory, that turnout won’t happen. Even if the fire is ruled accidental, its consequences remain the same. If a great number of Houston voters are disenfranchised as a consequence of the fire and the right’s election vigilante effort, democracy loses, and so does the country.

Keep in mind that population shifts will hand Texas several new congressional seats lost in the Democratic rustbelt. This election will decide the players who will draw new lines in redistricting. The stakes are high. The question is, do Democrats have the will to do battle with right-wing forces who believe they can choose who votes and who doesn’t?

[Austin’s Glenn W. Smith, according toDaily Kos founder Markos Moulitsas, is a “legendary political consultant and all-around good guy.” His excellent blog on politics and culture is DogCanyon, where this article also appears.]

Commissioners Court approved Kaufman’s emergency plan Monday to spend $13.6 million to buy 2,325 electronic voting machines and supporting equipment.
[….]
Kaufman’s plan includes 1.4 million paper ballots, which will be distributed to polling stations as a backup in case a shortage of machines leads to long lines.
[….]
Despite Kaufman’s confident predictions of a timely and fair election, 16 Democratic state senators and representatives have asked the U.S. Department of Justice to oversee the development of an emergency plan for voting that begins in 48 days. Their letter asks for the department’s involvement to “protect the voting rights of racial and language minorities” against any plans to close some of the 739 scheduled polling places due to a lack of equipment.

“Removing neighborhood voting locations and fostering conditions for longer lines must be avoided to prevent suppression of minority voters,” the legislators wrote…

Despite her apparent confidence, Kaufman urged residents to vote early to avoid long lines and said she would seek “loaner machines” from other counties.

The Chronicle reported no new information about the cause of the fire, but said that an arson investigation is under way.

3 Responses to Glenn W. Smith : It’s Getting Hot in Houston