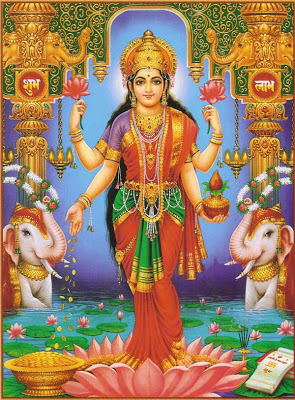 Lakshmi is the Hindu Goddess of wealth and prosperity, both material and spiritual. Image from Yoga USA.
A Mood Piece:
American Hindoonomics

I like to think about Emerson and Thoreau, the great American Hindoos: Atman is Brahman, Self is World, Spirit is One. If Inner and Outer are at War, then we have understood neither very well. Value will out, whether we listen to its whispers attentively or provoke it to shout. And these are shouting times.

As a Neo-Pythagorean of the Prechterite variety, I also like to think about why depressions are absolutely structured into the iron laws of history. And increasingly the answer comes out for me in a form that is American Transcendentalist, or American Hindoo if you will. Great destructions are necessary because we puffed things up that have no business being jumbo sized.

Meanwhile, little bitty precious things we have left in the sun to dry out, yes like raisins. And so we make it necessary to line up against each other and take the whole system down. Try not to forget this, Arjuna: reality cannot suffer. Your true self shall never change.

Here’s the methodology that I’m rehearsing for the descent. It’s called the quadruple negation. Along one of its diagonal cuts it sounds like this: neither anti-communist nor anti-capitalist. Neither anti-Keynesian nor anti-Friedmanite. And where I think this leaves me is with third-eye thinkers like Henry George or G.K. Chesterton who held out for concepts of economic justice connected to the ambiguities of common experience.

I can’t be anti-Marxist, because everywhere the dialectic of alienation grows new teeth. But neither can I be anti-Capitalist because so many worthy dreams take the shape of profits well-earned and unobstructed. Emerson’s royalties, for example, or his lecture fees.

Along another diagonal cut, I’m pretty sure I can’t be anti-gigantistic, because without the giants we make ourselves into there is something sublime that would go missing. Call it Cameronism if you will, with its blockbusters, superstars, and hedge fund financiers. Neither anti-big nor anti-small.

But comes a time as Thoreau sez when the friction invents the machine and what you smell is value turned wrong side out, like when the Gulf of Mexico gets monstrously transmogrified into the Gulf of Oil. Or when the machineries of state get so busy with foreign wars that the Commander in Chief is advised that the Department of Defense cannot lead a defense against an all-out assault upon our shores.

Anyway, here it comes. A period is upon us plainly announced in terms that Egyptologists call intermediate, when Parish Presidents and County Judges shall rise in unison to grip the handles of things not done on the ground for the people on the land.

Neither anti-federalist nor anti-state, neither anti-tax nor anti-profit. America as she stands is definitely not anti-war. What will we she have to go through before she also decides not to be anti-peace? Still yourself, Arjuna, before the true fight.