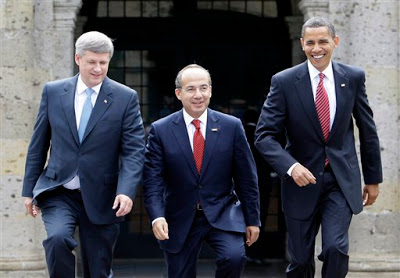 The fifth trilateral huddle of the presidents and/or prime ministers of Canada, U.S. and Mexico was held under the aegius of the North American Security & Prosperity Partnership (SPP or ASPAN in Spanish) that proposes to integrate energy and security mechanisms in the three NAFTA nations.

Appropriately, the Three Amigos Summit came at a moment when both North American prosperity and security are gravely challenged by the deepest economic slide in the region since the Great Depression and cross-border security has been undermined by Calderon’s reckless war on Mexican drug cartels that has taken 12,000 lives in the past three years and now threatens to spill over into the United States.

Indeed, the drug war was at the top of the Guadalajara pow-wow’s agenda – the “War On Terror” which had dominated these séances during the Bush regime was markedly missing from the protocols. One subtext of the drug war colloquy was Mexico’s chronic failure to stem human rights abuses by its military and police that now imperils $1.4 billion of Washington’s Merida Initiative funding to bolster security forces south of the border.

Under terms of the 2007 Initiative negotiated by George Bush and Felipe Calderon in Merida, Yucatan, the U.S. congress must certify that Mexico is taking steps to mitigate the thousands of complaints of drug war abuses filed by citizens with the National Human Rights Commission (CNDH) and verified by international human rights organizations. Failure to take corrective action would result in forfeiting 15% of the funding, a stipulation that Mexican president Calderon has been reluctant to comply with, insisting that all alleged abuses have been addressed by a military justice system that has no civilian oversight.

The certification clause was embedded in the Merida Initiative after the Calderon government failed to resolve the murder of U.S. independent journalist Brad Will during 2006 civil unrest in the southern state of Oaxaca. Despite front page photographs of five plainly identified Oaxaca police officers firing on Will, Calderon’s federal prosecutor and local officials under the thumb of Governor Ulysis Ruiz have refused to issue arrest warrants for the cops, instead accusing members of the Oaxaca Peoples Popular Assembly (APPO) of responsibility for Will’s death.

Although forensic investigations by the CNDH and the Boston-based NGO Physicians for Human Rights (which was asked by the Will family to conduct an independent probe) established that the reporter was gunned down from 35 to 50 meters away presumably by the same police shown in the newspaper photographs, Calderon’s federal prosecutor Eduardo Medina Mora and local authorities contend that Will was shot at close range by activists with whom he was standing during the October 27th 2006 confrontation.

APPO member Juan Manuel Martinez has been imprisoned for nearly a year after being fingered by two alleged eyewitnesses, both of whom concede they did not actually see Martinez fire the fatal shot — international NGOs such as Human Rights Watch, Amnesty International, and the Committee To Protect Journalists decry Martinez’s arrest as a frame up.

This July 29th, ten days before the Three Amigos Summit was gaveled to order in Guadalajara, the Federal Prosecutor’s Office (PGR) sought to reaffirm its case against Juan Manuel Martinez and blunt the threatened loss of Merida moneys by publishing the results of an investigation purportedly undertaken by the Royal Canadian Mounted Police that corroborated the Mexican government’s disputed finding of APPO culpability in the shooting of the U.S. reporter.

But the RCMP conclusions proved to be little more than a shabby fiction — the three supposed Mounties were in fact contractors-for-hire who were no longer employed by the Canadian police. Their investigation was replete with factual errors (the ex-Dudley Do-Rights reportedly did not read or speak Spanish) and was debunked by Will’s parents. Nonetheless, the ploy met with limited success: the incarceration of Juan Manuel Martinez appears to have softened any lingering doubts the U.S. State Department may have entertained about the dubious quality of Mexican justice and Brad Will’s murder was never mentioned in Guadalajara.

Signing up fake Mounties to corroborate the Martinez frame-up comes at a low point in Mexico-Canada bilateral relations. Protests by Mexican farmers and Indians at widespread environmental damage caused by Canadian mining corporations have surged here in the past months. To further agitate the waters, Steven Harper’s conservative government, citing thousands of Mexicans who arrive in Canada each month to petition for political asylum, clamped a visa requirement on visitors from the south this summer, bollixing the vacation plans of hundreds of families whose vehement protests outside the Canadian embassy here provoked stringent policing.

Despite Calderon’s personal appeal to Harper at the Guadalajara head-to-head, the Canadian prime minister refused to back down on the visa requirements. Instead, in the spirit of the Security & Prosperity Partnership, Harper offered a $15 million Royal Canadian Mounted Police program to train Mexican police chiefs.

During the 2008 U.S. presidential campaign, Barack Obama barnstormed the rust belt pledging to revise NAFTA chapters that are squeezing U.S. workers — but reopening the 15 year-old trade agreement was not on the Guadalajara agenda. (Obama’s chief of staff Rahm Emanuel had previously warned Canadian officials not to take his boss’s campaign promises seriously.) Although workers and farmers in the three NAFTA nations demand revision, opening up the free trade treaty is a non-starter for the three amigos in these economically perilous times.

In fact, the U.S. congress has unilaterally reneged on a NAFTA provision that would allow Mexican long haul drivers to operate on U.S. highways. In retaliation, Mexico slapped $6.2 billion USD in potential tariffs on 89 U.S. products, including dog food and Christmas trees. No progress in resolving the trade dispute was registered at the Guadalajara summit.

With security at red alert levels, Obama flew into Guadalajara, the financial center for Mexico’s six major drug cartels, aboard Air Force One escorted by five helicopter gunships. Drug war paranoia was palpable and 5,000 police and army troops were mobilized to protect the three amigos during their brief stay in Mexico’s second city.

The drama mounted when an operator for the Pacific Cartel in Sinaloa was captured after cops got wind of an alleged plot to assassinate Calderon at the Summit. Even as the three heads of state gathered in Guadalajara, Silvia Raquenel Villanueva, a legendary lawyer who made her bones defending drug kingpins, was gunned down at a posh Monterrey mall by unknowns — Raquenel, whose life is celebrated in popular narco-corridos, had survived four previous assassination attempts.

Obama’s 20-hour visit was his second as U.S. president — last April, he traveled to Mexico City just as the swine flu epidemic detonated here although he was kept in the dark of the dangers of contagion by Calderon — an anthropologist who accompanied Obama on a tour of the National Anthropological Museum subsequently died of respiratory failure and a Secret Service agent was stricken. This time around, El Baracko came equipped with a full medical team.

The U.S. president was also accompanied by his just-designated ambassador to Mexico, Carlos Pascual. The scion of a well-connected Cuban family who fled the island in the first years of the revolution, Pascual is the highest-ranking Gusano on the Obama payroll but his anti-Castro roots will not sooth perpetually stressed Cuban-Mexican relations. A Brookings Institute fellow, Pascual is said to be an expert on “failed states” — a recent U.S. Joint Chief of Staff analysis (JOE 2008) posits that Mexico is at risk of becoming a “failed state.”

While the drug war dominated the Guadalajara tête–à–tête, the coming swine flu season was much on the minds of the three amigos. Last spring’s outbreak in Mexico which is thought to have germinated in a U.S.-owned hog farm in Veracruz, spread north rapidly, triggering threats of quarantine and the scapegoating of Mexicans around the world.

Also troubling the Guadalajara agenda: what to do about pesky Manuel Zelaya, the constitutional president of Honduras who was dislodged by a military coup at the end of June. While the events herald unwelcome destabilization in Central America as oligarchs and their cronies in the military take heart from Zelaya’s overthrow, both Obama and Harper waffled on support for the Honduran president’s reinstatement as mandated by the Organization of American States, and the first Afro-American president of the U.S. bristled at allegations that his government was not doing its part to facilitate Mel Zelaya’s return to power, arguing that the same leftists who demand the Yanquis get out of Latin America insist that Washington increase pressure on the Honduran coup-makers.

Just days before the Guadalajara summit, the deposed Zelaya flew to Mexico to lobby Felipe Calderon and members of congress into supporting his return to Honduras. But the Honduran earned his Mexican counterpart’s scorn when he spoke favorably of leftist Andres Manuel Lopez Obrador (AMLO) who continues to maintain that he beat Calderon in the fraud-marred 2006 presidential election here. In retribution, Calderon’s elite presidential guard prevented Zelaya from talking to the press when he exited the country.

The North American Security & Prosperity Partnership is the brainchild of Obama’s predecessor George Bush and was designed to assure Washington of a secure oil flow from both Canada and Mexico that together comprise nearly a third of the U.S. energy basket. Increased integration of security forces envisions the deployment of U.S. troops on Mexican soil to safeguard vital Caribbean oil fields from international terrorism — Washington and Mexico participated in war games that simulated terrorist attacks in the Gulf of Mexico at the end of July.

The U.S.’s renewed “outreach” to its southern neighbors forms one leg of a strategy to refocus Washington’s attentions on Latin America after years of marginalizing the continent during which the anti-neoliberal pendulum swung decisively to the left.

Other outcroppings of the renewed Yanqui strategy: the mobilization of the U.S. Fourth Fleet to patrol the Atlantic and Caribbean theaters and the establishment of seven U.S. air and naval bases in Colombia, one of Washington’s few allies in the region, which, not surprisingly, has stirred alarm on the Latin American Left.

Meeting in Quito on the very days that the three amigos were connudling in Guadalajara, the 12-nation UNASUR (“Union of Nations of South America”), a Bolivarian mutual defense system, exhorted Obama to support the return of Mel Zelaya to Honduras and robustly condemned the latest U.S.-Colombian adventure.

Ironically, the SPP-ASPAN with its implications of a new Pax Americana in Latin America, has become a red flag for right-wing gringo conspiracy buffs who most recently have been obsessed by Barack Obama’s birth certificate(s.) For the “birthers” and the “tea party patriots,” the SPP-ASPAN is a subversive plot to overthrow the United States, nullify U.S. laws, and coin a new currency that will displace the Yanqui dollar. Waving small American flags, an angry gaggle of “patriots” showed up in Guadalajara to denounce the conspiracy.

But the most pertinent gringo invasion of Mexico came post-Three Amigos when the U.S. soccer team stormed Mexico City to face off against Mexico’s faltering national team in a do-or-die qualification match for the 2010 World Cup. In 23 previous outings at the gargantuan (105,000) Azteca stadium, the Americanos had never won a game and the August 12th contest was no exception with the Mexicans grinding out a narrow one-goal victory — the U.S. star Landon Donovan was subsequently bedded with Swine Flu.

The win over the hated Yanquis was perhaps the only positive result of the Three Amigos Summit for this distant neighbor nation.

[John Ross is back in the maw of the Monstruo. His monstrous chronicle, “El Monstruo — Dread & Redemption in Mexico City” will be published by Nation Books this November. If you have further info write johnross@igc.org.]

This entry was posted in Rag Bloggers and tagged Barack Obama, Canada, Mexico. Bookmark the permalink.