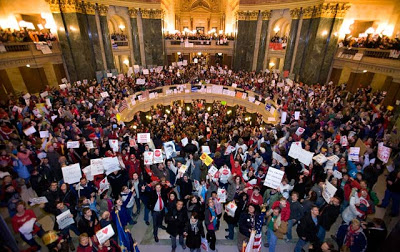 The year 2011 was truly an exciting year for progressives. Arab spring sent shock waves across the Middle East, launching a campaign for democratization that will ultimately impact every regime in the region. Also Arab spring confirmed to the rest of the world, including the United States, and particularly those engaged in Occupy movements, that mass mobilization, challenging economic control and military might with people power, can affect history.

The spirit of grassroots anger, activism, a growing sense of solidarity across races, gender, class, and national boundaries, planted the seeds for the rise of a new age out of the old. As the young people in Tahrir Square knew from the beginning of their protest, the struggle will be long, sometimes bloody, but the 99 per cent, in the end, will win.

But 2011 also showed the world that politics can be ruthless. Masses of people died in Egypt, Yemen, Libya, Afghanistan, and in various locations in Africa, Europe, and North America. The United States shifted priorities from sending the military everywhere to supporting private armies and high tech drone warfare. Secret intelligence agencies now define the threats to the United States who are targeted for assassination.

Meanwhile the mass media has celebrated executions abroad and at home and the deaths of ostracized leaders. In many ways 21st century global culture has become a “death culture,” in its entertainment as well as its politics. Killing has become fun.

Within the United States, political forces have been unleashed that are trying to return politics to the Dark Ages: 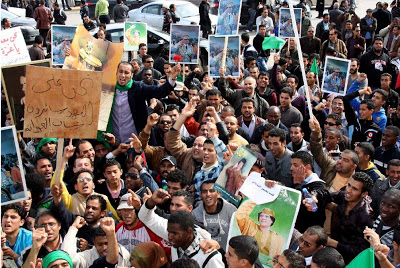 Protests against the regime of Muammar Gaddafi in Libya, February 2011. Image from News4Europe.
So at the dawn of the 2012 the world continues its contradictory path. And as the forces of light and darkness contend, progressives once again are confronted with political choices. As the debates escalate, particularly in the electoral arena, some of the summary data I accumulated just after the 2010 election remains relevant:

Through gubernatorial and legislative victories at the state level Republicans will control the designation of 170 congressional districts while Democrats will control 70. The rest, about 200, will be determined by bipartisan bodies.

Republicans won three state legislatures in the Northeast, eight in the South, nine in the Midwest, and five in the West. Looking at a USA map of red and blue states, 27 states will be red in the next period.

As I write, Indiana workers are marching inside and outside the state capital protesting the backroom passage of a new right-to-work law. Indiana has not been a right-to-work state since the 1960s. In 2008, the Indiana House of Representatives consisted of 52 Democrats and 47 Republicans. Today the House has 60 Republicans and 40 Democrats.

And as a result of the 2010 election, not only is it likely that right-to-work legislation will become a reality in Indiana but education and resources for women’s reproductive health will be even more vulnerable.

There are similar stories to be told in each and every state, as well as in the national political arena. And, at the same time, there are differences in politics and history in each state and locale. And make note: none of this has much to do with the selection of nominees for president of the United States. That story is the circus, the Super Bowl — Romney or Santorum, the “moderate” Republican or the “social conservative.”

So progressives have a lot to think about in 2012: how to protect the people, the 99 percent, from all the hurt that they increasingly will experience in the short run while at the same time moving “inch by inch, row by row” to the vision that animated Arab Spring, Ohio, and Madison, Wisconsin.