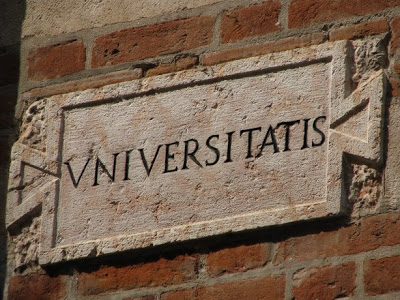 Image from Occasional Links and Commentary.
Fairness in Hypocrisy Valley

Since elections, the public expression of political power, are significantly determined by millionaires, trustees at Hypocrisy Valley usually are the wealthy and powerful.

I have spent much of my adult life in Hypocrisy Valley, a small community which is the regional center of commerce, agriculture, and modest industrialization. It also is the home of a major university, Hypocrisy Valley State University, which has a reputation, we are told, in agriculture, engineering, and science. As a state supported institution it is obliged to serve the research and educational needs of the citizens of the state.

The faculty size of the university and the student population has grown by 25 percent in 40 years. The university is the largest employer in the county, and many workers say that while they receive low wages, are not treated with particular respect (except for the annual spring fling distribution of free hot dogs), they work at the university because of the health and retirement benefits, which exceed benefits from other employers in the area. Of course, state law prohibits Hypocrisy Valley employees from organizing staff or faculty unions.

Hypocrisy Valley historically has had mediocre sports teams but from time to time they defeat the other major state universities. Masses of alumni do descend on the university during the football season to drink, eat, and watch Hypocrisy Valley players suffer defeat. Unrelated to performance levels, football and basketball coaches make huge salaries, as is common in collegiate sports, and the Director of Athletic Programs makes hundreds of thousands of dollars in salary and perks and participates in several academic decisions at the university.

Over the last 25 years, the number and cost of higher administrative personnel have grown enormously. In addition, selected “star” faculty have enjoyed huge raises. Gaps between the salaries of high-tech, big business, drug company researchers and professors of liberal arts, education, and the pure sciences have grown as well. But all celebrate the fact that Hypocrisy Valley has developed a world reputation, even ranked highly by U.S. News and World Report, the arbiter of quality in higher education.

Presidents at Hypocrisy Valley have served one or more five-year terms before retiring and being replaced. Ordinarily, these presidents are celebrated for their historic contributions to the evolution of the university, only to be all but erased from the University’s history upon retirement. Often the Board of Trustees, the big business elites appointed by Governors to rule the university, name buildings or roads after retired university presidents.

This gets to the heart of academic rule at Hypocrisy Valley. The Board of Trustees makes major decisions about the character and future of the university, including faculty and staff employment. Generally, high-paid administrators accept decisions as they are announced. And since the Board is appointed by sitting Governors, higher education policy is directly related to the distribution of political power in the state.

In addition, since elections, the public expression of political power, are significantly determined by millionaires, trustees at Hypocrisy Valley usually are the wealthy and powerful. Often Trustees come from multinational corporations, banks, and real estate interests in the state and the country. And this influence “trickles down” from the selection of higher levels of administration at Hypocrisy Valley, to curricula, to admissions policy, staff and faculty salaries, and student tuitions.

Recently, decisions at Hypocrisy Valley generated more commentary than usual. The outgoing president, who served one five-year term was encouraged to retire. She was granted a $500,000 severance payment, a continuation of her tenured position in an academic department related to her expertise, and a full-paid sabbatical leave, while she serves on boards of distinguished national scholarly institutions.

Information about the severance payment was reported, in the usually pliant local newspaper, the Hypocrisy Journal. The Journal reported also that the Board is reconfiguring faculty and staff health care costs, including increasing recipient co-payments. The severance package of $500,000 will be paid out of university discretionary funds. Increased health care costs for Hypocrisy Valley employees will be paid for by them.

In addition to the appearance of political skullduggery, the governor had already cut higher education budgets, helped establish an online university as an alternative to traditional higher education, supported the privatization of public education from K to grade 12, opposed women’s access to reproductive health, and signed anti-labor legislation. Some of his strongest defenders argue that having a new president with no higher education administrative experience might make him best equipped to run this world-class institution.

Meanwhile, the Hypocrisy Journal, while publishing a few opinion pieces criticizing the appointment of the outgoing governor as the new president, shifted most of its editorializing to strong support for the appointment, despite a few well-researched stories about the less transparent aspects of the appointment.

I am sure that Hypocrisy University will survive the moral and political corruption of the presidential appointment. Major changes in university policy will not occur. Big corporations and banks will continue to be served by the bulk of ongoing research and teaching. The Board of Trustees will continue to rule in relative secrecy.

Faculty, in the main, will complain in the corridors but will not think of organizing. Students will endure higher tuition to pay for administrative salaries. Growing numbers of young people from around the state, often minorities and working class kids, will search for alternatives to the prohibitively expensive education costs at Hypocrisy Valley.

As Hoosier novelist, Kurt Vonnegut once wrote: “So it goes.”