Harry Targ : U.S. Imperialism and Our ‘Special Relationship’ With Iran 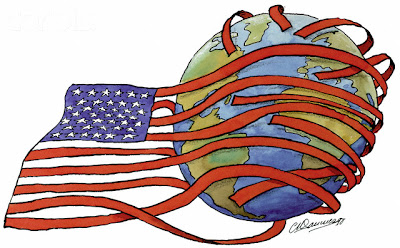 Given the troubled history of U.S./Iranian relations spanning at least 60 years, the current threats of war expressed by both Israel and the United States are not surprising.

U.S. Imperialism in the beginning

Modern imperialism is intimately connected to the globalization of capitalism, the quest for enhanced military capabilities, geopolitical thinking, and ideologies of national and racial superiority.

The rise of the United States empire occurred as the industrial revolution spread to North America after the civil war. Farmers began to produce agricultural surpluses requiring overseas customers, factories were built to produce iron, steel, textiles, and food products, railroads were constructed to traverse the North American continent, and financiers created large banks, trusts, and holding companies to parley agricultural and manufacturing profits into huge concentrations of cash.

Perhaps the benchmark of the U.S. emergence as an imperial power was the Spanish/Cuban/American war. The U.S. established its hegemony in the Western Hemisphere, replacing the Spanish and challenging the British, and became an Asian power, crushing rebellion and planting its military in the Philippines. The empire has grown, despite resistance, to this day.

While U.S. expansion occurs wherever a vacuum of power exists, and an opportunity to formally or informally control a regime and/or territory, particular countries have had enduring salience for the U.S. Iran is such a country.

Scale of significance for U.S. imperialism

To help understand the attention U.S. policy-makers give some countries, it is possible to reflect on what is called here the Scale of Significance for U.S. Imperialism (SSUSI). The SSUSI has three interconnected dimensions that relate to the relative importance policymakers give to some countries compared to others.

First, as an original motivation for expansion, economic interests are primary. Historically, United States policy has been driven by the need to secure customers for U.S. products, outlets for manufacturing investment opportunities, opportunities for financial speculation, and vital natural resources.

Second, geopolitics and military hegemony matter. Empires require ready access to regions and trouble spots all around the world. When Teddy Roosevelt, as Assistant Secretary of the Navy, Vice President, and President of the United States, articulated the first warning of the need for global power he spoke of the development of a “two-ocean” navy.

The U.S., he said, must become an Atlantic and a Pacific power, thus prioritizing the projection of military power in the Western Hemisphere and Asia. If the achievement of global power was dependent upon resources drawn from everywhere, military and political hegemony in the Persian Gulf, the Middle East, and parts of Africa also required attention.

Third, as the imperial project grows, certain political regimes and cultures take on particular importance for policymakers and the American people. Foreign policy elites claim that the U.S. has a special responsibility for them. If these roles are rejected by the targeted country, the experience burns itself into the consciousness of the people.

For example, Cuba was seen by U.S. rulers as far back as Thomas Jefferson as soon to be part of the United States. Cuba’s rejection of this presumption of U.S. tutelage has been a scar on the U.S. sense of itself ever since the spread of revolutionary ferment on the island.

The danger of war with Iran today

Reflecting on the SSUSI adds to the discussion about current United States foreign policy toward Iran. The history of U.S./Iranian relations has been long and painful. Before the dramatic United States involvement in that country, Iran’s vital oil resource had been under control of the weakening British empire. In 1901 the Anglo-Iranian Oil Company (now British Petroleum) consolidated control of much of the production, refining, and export of Iranian oil. Local oligarchs received only 16 percent of the oil revenue from the global sale of the oil.

After World War II, with a young monarch Mohammad Reza Shah serving as the Iranian ruler and Iranian masses living in poverty, Iranian nationalists mobilized to seize control of their valuable resource. Upper class nationalist Mohammed Mossadegh became Prime Minister and asserted the power of the parliament over the monarchy. The parliament voted to nationalize the Anglo-Iranian Oil Company.

The British government enlisted the United States in 1953 to overthrow the Mossadegh regime using covert operations directed by the CIA. After Mossadegh was imprisoned and the Shah given full power to impose his will on an angry population, a new oil consortium agreement was established in 1954 which allowed five U.S. oil companies to gain a 40 percent share of Iranian oil. Anglo-Iranian would retain another 40 percent, and the rest would be given to rich Iranians.

Over the years, the Shah’s regime became the bulwark of U.S. power in the increasingly vital Persian Gulf region. In the Nixon period, Iran was defined as a key “gendarme” state, which would serve as a surrogate western police power to oversee the region. Presumably Iran would protect the flow of Gulf oil to the United States, Europe, and Japan. By the 1970s, the Shah’s military was the fifth largest in the world.

To the great surprise of left critics of the Shah’s dictatorship, the CIA, and the Carter administration, the Shah’s regime began to crumble in the summer of 1978 as large strikes were organized by oil workers against the regime. In January, 1979 secretly organized massive street protests led by the religious community doomed the regime.

As Iranian soldiers refused to fire upon street demonstrators, President Carter’s National Security Advisor, Zbigniew Brzezinski, urged the president to send troops to Iran to save the U.S. regional policeman, the Shah, from overthrow. That proposal was rejected by Carter.

After jockeying for power in the post-revolutionary period, religious leaders consolidated their power over the political system. To add embarrassment to loss of economic and geopolitical control over the vital Persian Gulf region, Iranian students took 52 U.S. diplomats and military attaches hostage and held them for 444 days.

In 1980 Carter authorized a military rescue effort that failed. The bungled military operation further damaged the image of infallibility that American foreign policy elites, and the public, held about the nation’s power and destiny.

In the 1980s, to challenge Iran’s potential for becoming the hegemonic power in the Gulf, the Reagan administration sided with Iraq in the brutal war between it and Iran. In 1988, shortly before the end of the Iraq/Iran war, U.S. planes shot down a civilian Iranian airliner killing 290 people aboard.

Subsequent to the ignoble history of U.S. support for the Shah’s dictatorship, militarization, the overthrow of Mossadegh, the embarrassment of the hostage taking, funding Iraq in the brutal Gulf war of the 1980s, the United States has maintained hostility to Iran despite occasional signals from the latter of a desire to establish better relations.

U.S. policy has included an economic embargo, efforts to create region-wide opposition to the regime, expressions of support for a large and justifiable internal movement for democracy and secularization in the country, and encouragement, more or less, for growing Israeli threats against Iran.

Given this troubled history of U.S./Iranian relations spanning at least 60 years, the current threats of war expressed by both Israel and the United States are not surprising.

Returning to SSUSI and Iranian relations

As an emerging global power, United States needs for natural resources, customers for consumer and military products, investment opportunities, and outlets for energy companies grew throughout the twentieth century. One of the significant historical junctures in the transfer of economic and geopolitical power in the world from the declining British empire and the rising U.S. empire was the agreement to redistribute control of Iranian oil in 1954. The Anglo-Iranian Oil Company was obliged to share Iranian oil with the then five U.S. oil giants.

As U.S. oil needs and those of its friends in Europe increased, control of the Persian Gulf region and access to its oil became more vital. Furthermore, since a hostile Iran could control the Strait of Hormuz, the Iranian revolution of 1979 posed an increasing geopolitical problem for American dominance.

The impulse in 1979 to send U.S. troops to save the Shah’s regime was driven by both economics and geopolitics. It was only because other Carter advisers disagreed with the National Security Advisor on the possibility of saving the Shah that a U.S. intervention stalled in 1979. But in 1980 an Iraq/Iran war provided an opportunity, it was hoped, to weaken Iran’s potential control of the region.

Finally, the U.S. decision-makers since 1953 saw a special relationship between this country and Iran. The U.S. put the Shah in power, plied him with enormous military power, encouraged and facilitated significant cultural exchanges, and defined his regime as a junior partner in policing the region.

The rapidity of the Shah’s overthrow and the anger expressed by the Iranian people about its historic relationship to the American people communicated to the world declining U.S. power. Consequently, U.S. hostility to Iran in subsequent decades using a variety of issues including processing uranium is not surprising.