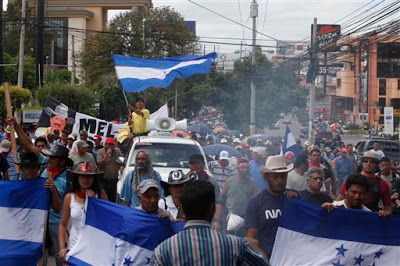 One demonstrator, a 19-year-old man, was killed, although some sources report as many as four deaths… Witnesses say military snipers perched on the control tower and other buildings were responsible for the bloodshed, the worst so far in protests against the coup.

After a tense and confusing weekend at the airport, demonstrators gathered near the presidential palace in Tegucigalpa on Monday, July 6, to continue voicing opposition to the coup d’état that had deposed President Manuel Zelaya a week earlier.

Zelaya had pledged to return to Honduras but soldiers and police kept Zelaya’s plane from landing at the Toncontín Airport on Sunday afternoon by parking military trucks on the runway and by threatening an attack by an air force plane that followed it closely as it approached the airport. The president’s plane, which also carried Miguel D’Escoto Brockmann, president of the United Nations General Assembly, and a number of journalists, flew to Managua instead and shortly afterward to El Salvador.

In what some describe as the largest political demonstration in the history of the country, thousands of demonstrators had marched to the airport on Saturday to greet Zelaya, whose planned return on Thursday had been postponed until Saturday and then Sunday. The de facto government had said they would arrest Zelaya as soon as he entered Honduran territory.

The coup government had tried to prevent Hondurans living outside the capital from joining the demonstration by stopping busses, beating and arresting the passengers and, in at least one reported case, shooting out the tires with machine guns.

The reported 2,000 police and military at the airport on Sunday had been swept aside without incident several times by the mass of demonstrators, who greatly outnumbered them. But a clash with the military occurred when demonstrators near the end of the runway rushed toward the soldiers and trucks blocking it as Zelaya’s plane circled overhead. One demonstrator, a 19-year-old man, was killed, although some sources report as many as four deaths, and an undetermined number were wounded. Witnesses say military snipers perched on the control tower and other buildings were responsible for the bloodshed, the worst so far in protests against the coup.

It is not known how many demonstrators were arrested.

Later in the afternoon, the government announced the curfew declared a week ago would begin at 6:30 instead of the usual 10:00, giving demonstrators little time to reach safety. The original hours were restored the next day.

“If the United States can live together with those who perpetrate coups, democracy is finished,” Zelaya declared to reporters on the plane. “I ask the powers with economic and commercial influence to take action when attacks based on barbarism and terror are launched against legitimate governments, as in Honduras.”

In El Salvador, Zelaya met with that country’s president, Mauricio Funes, as well as Presidents Cristina Fernández de Kirchner of Argentina, Rafael Correa of Ecuador, and Fernando Lugo of Paraguay, and also with José Miguel Insulza, secretary general of the Organization of American States.

The coup government has sought to gain support within Honduras by spreading fear of attacks by foreign elements inside the country and at its borders. The pro-coup paper La Prensa reported on its front page that Tegucigalpa has been suddenly invaded by foreign terrorists, most of them Nicaraguans, Venezuelans and Cubans, bent on destroying the country’s institutions and sowing chaos. They have supposedly bombed several government building within the past week. The head of the Honduran Human Rights Committee says the government has launched a “ferocious campaign of xenophobic repression” against foreigners living in Honduras, particularly Nicaraguans and Venezuelans.

And de facto president Roberto Micheletti has been quoted as saying the Nicaraguan military was gathering at the border with Honduras in preparation for an invasion, a charge Nicaraguan President Daniel Ortega has flatly denied.

Meanwhile, nineteen members of the legislature are not convinced. Thirteen representatives who belong to Zelaya’s own Partido Liberal and six who belong to other parties have reportedly issued a statement opposing the coup and asking for Zelaya’s reinstatement. And Porfirio Lobo Sosa, presidential candidate for the conservative Partido Nacional, has also publicly condemned the coup.

The Organization of American States has rejected the Micheletti government’s withdrawal of Honduras from that organization on the grounds that it is not a legitimate government and has no authority represent the country.

And see all Rag Blog coverage of the coup in Honduras here.