Houston : In the Aftermath of Ike 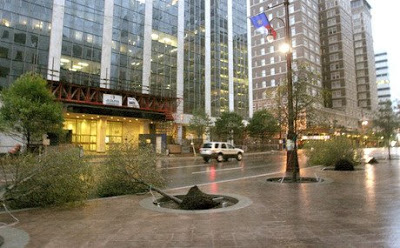 Trees lay on the ground early Saturday morning in downtown Houston. The city suffered very minor damage and those who stayed were breathing a sigh of relief as dawn broke. Photo by Andrew Locke / MSNBC.com.
‘We now have a real understanding of how much we depend on electricity’
By Connie Clark / The Rag Blog / September 23, 2008

HOUSTON — Life would seem to be back to normal for most of us, except for the traffic. About 40% of our area power is still down (and signals dark) which evidently created an unusually big traffic issue, even on the freeways for some unexplained reason. Conscripted from my office to field operations work, I’ve spent five days straight driving around, locating damaged signal heads cables and poles to dispatch repairs, so that when power is restored, the signal could be put back in operation quickly. This turns out to be an important task remaining to restore civility here.

The east side of the county, still largely without power, seemed to be hit a little harder (the dirty side of the storm). They will recover just fine, but I did see a lot of power lines down on the ground which will delay the recovery. Power to neighborhoods where trees have fallen on the power lines is the last to get restored. Thousands of places. That includes the east side, the piney woods north side and River Oaks in the middle of town. There are, as you may know, huge, grand live oak trees in that neighborhood and the piles of tree debris is massive there. Landscape and tree trimming services are happy contractors these days, sucking up a lot of cash. Otherwise, hurricane damage is evident in the shabby billboards, and collapsed wimpy metal roofs over some of the gas station and convenience store pumps across town. The curfew of 12 midnight is still in effect. We’re paying average price for gas with more stations open, no lines. $3.49 to $3.69.

Folks here are surprisingly still very patient with the inconvenience of no power. I know some must be on the brink. Neighbors are helping neighbors with long extension cords I hear. We now have a real understanding of how much we depend on electricity. Grocery stores and gas stations closed, water supply systems not operational. No lights, no food refrigeration, no AC, no TV or internet and for a while sketchy cell phone service. Our lives not to even speak of some of the disabled or elderly are so tied up with all that. My neighbor who stayed home for several days without electricity said that it got bad at dark, 7 pm to 10 pm was just nothing, just sit in the dark with her dog. When would we do that any other time without being forced to?

Galveston is another story of course, but not hopeless. The City behind the seawall is already coming back – big clean up effort and historic district homeowners will return Wednesday. The Strand’s got a lot of muck to clean out due to the 8 foot of water, so businesses are anxious to get started. Gaidos restaurant, an old one located right on Seawall Boulevard is already open for business. Some beach homes on the west beach area were wiped out, but others suffered repairable damage.

The Bolivar Peninsula has little left of it. One fairly new beach house still standing out there has shown that it is possible to build to withstand a hurricane. My personal wish is that Bolivar become a wildlife sanctuary. That particular area is one of the best birding spots in the country. It is in the flyway of neotropic migrating birds as well as a year-round home for many coastal birds. In the fall, the flats welcome huge numbers of various shore birds. We should just let them have the little peninsula. Unfortunately youthful beach goers a few years ago identified Crystal Beach as the last beach in the Galveston area to not restrict drinking, and it is popular for that. And then there are developers.

It had been 25 years since our last hurricane (Alicia), and many Houstonians were not here then. They now know what a hurricane really does. I’m glad of that, because we could get another one a lot sooner than 25 years.

And, here is an electric-less anecdote:

Saturday morning am, after staying up all night monitoring the storm’s awesome winds, Randy and I needed coffee so we could carry on with neighborhood street debris clean up. No power, so no coffee maker. But, of course we could boil hot water on the gas stove and just pour over coffee in the filter. Old style, should work just fine. However, all our coffee is in the form of beans, that need an electric coffee grinder. Rats!

Randy drove all over the newly windblown area looking for coffee. No luck. That’s when we decided we’d better just leave town until things got better.