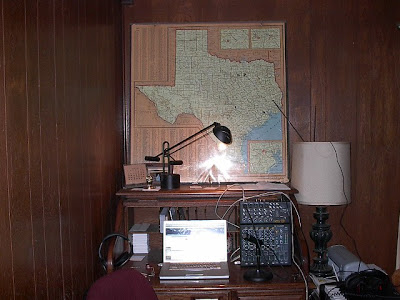 Here is my work space. The map has no roads. I look at it every day. It used to hang in the KTRH newsroom in Houston during the 30’s when Walter Cronkite worked there. He would have looked at it every day too.

[Dan Earhart is a former Houston newsman. CBS News legend Walter Cronkite who died Friday, July 18, at the age of 92, grew up in Houston where he was a reporter at the Houston Post and the Houston Press.]