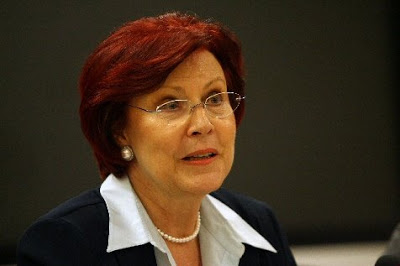 Some quick steps in February and March working towards the April 2nd Summit on the International Finance System. And some long-term, medium-term, and immediate work to achieve more democracy with social fairness and ecological viability.

Stiglitz attended as Chair of the new United Nations Commission of Experts on Reforms of the International Monetary and Financial System. Heidemarie is also a member of that commission which was established by the President of the UN General Assembly with the mandate to reflect on the causes of the crisis, assess impacts on all countries and suggest adequate responses as to avoid its recurrence and restore global economic stability.

The workshop in Berlin served two purposes: It was called to include other experts on the finance crisis also from non-governmental think-tanks and citizens’ groups, and was an occasion for Commission members to meet and work on their recommendations that were then published on March 20th . The Stiglitz Commission Recommendations (18 pages) are available online. 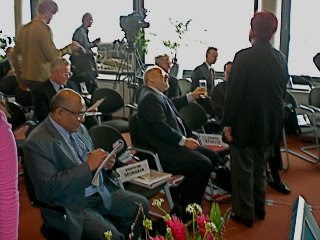 Hasty snapshot of Joseph Stiglitz looking up at Heidemarie Wieczorek-Zeul during the Berlin Dialogue on the Financial Crisis and Changing the International Finance System.

Some background: In February Wieczorek-Zeul had, as earlier mentioned in The Rag Blog, convened an international working group on the international impacts of the breakdown of the financial system. That served to develop the current German position on the issues. Politically active since the mid-1960’s, she has been a Member of the European Parliament, is a Member of the German Parliament (Bundestag) and heads (like a cabinet position) the Federal German Ministry for International Cooperation and Development.

All the above has, as one immediate focus, the April Financial Crisis Summit in London.

The March meeting was opened by Heidemarie pointing out the window to where The Berlin Wall had been, and was taken down (by curious East Germans, not by Gorbatchov or Reagan), and noting that current changes are larger.

(1) In 1944 at Breton Woods, New Hampshire, a conference did create an international financial system. That was based on a single nation’s currency, the US dollar, pegged to a physical commodity, gold. (An alternative, proposed by Keynes and others, would have been to create an actually international reserve currency.) Also several international institutions were created (“World Bank”, “International Monetary Fund”) with participation and decision-making based on the amount of money put in. The USA was by far the richest country at the end of WW2.

(8) In 1970, at a time of international financial turbulence, US President Nixon called a meeting of the richest countries. (That eventually became the “G8” meetings of heads of governments of the richest 8 countries.) Nixon took the dollar off the gold standard, but the dollar remained the international “reserve currency”.
In the Spring 2007, with growing international financial stresses, the “G8” met in Germany, at Heiligendamm. There were large theatrical blockades outside and a real blockade inside that meeting. The German position, as host and also as chair of the European Union, included putting the financial system on the agenda.
Bush blocked that.

(20) Following Paulson’s panicky punt in September 2008 with a three page bank bailout plan (without any congressional oversight or judicial review) there were numerous crises meetings. The European Union “asked” (some said “insisted”) on an emergency financial summit meeting with Bush in November, with the G20 so as to include countries from all continents. At that meeting Bush agreed to stop his blockade and put the international finance system on the agenda with a meeting of the G20 scheduled for this April, 2009.

(185) The G20 includes Brazil, South Africa, China and others. The recommendation by Stiglitz, Heidemarie and others in the UN Commission on the financial system is to create an architecture that includes all 185 countries.

But as a participant at the March workshop in Berlin put it: the Titanic has hit the iceberg. It is not a matter of rearranging the deck chairs. Some immediate and near-term actions are needed. It is the case that, as the ship is sinking, actions are needed and can not be postponed while building a whole new liner – that is a longer term job. But unlike what actually happened as the Titanic sunk, with few life boats and many people locked below decks, now immediate and near-term actions must include all involved.

One long-term recommendation, also urged by the current German chancellor, is to create an Economic Council at the United Nations parallel to the (old) Security Council. While a global town meeting using the internet and consensus decision making might be imaginable, that is not immediately, if ever, practicable. And the (old) UN Security Council is also no longer a model. The recommendations do include some steps towards reform of the United Nations, in the long-term, as an international forum to handle international economic issues.

(B) medium-term: a philosophical and hard economic question: what is “money”, and what is a “reserve currency”? What is “the financial system”, and what are “banks” and “financial institutions” in that system?

The value and role of the “dollar” is already an issue. One medium-term consideration is NOT to replace all dollars, or replace the dollar as a currency, but maybe to use an already existing economic tool called “special drawing rights” (SDRs) already available among central banks through the International Monetary Fund (IMF):

“The SDR is an international reserve asset, created by the IMF in 1969 to supplement the existing official reserves of member countries. SDRs are allocated to member countries in proportion to their IMF quotas. The SDR also serves as the unit of account of the IMF and some other international organizations. Its value is based on a basket of key international currencies.”

Facing the disaster of past policies, there have already been some policy changes by staff at the IMF. There will be more changes in the near and medium term.

Oversight: A core issue that was blocked by Bush at the Spring 2007 G8 summit was the lack of insight and oversight about international financial activities. What is happening? What is “in” the “investment products” in banks and other entities engaging in international economic activities? What are “systemic” dangers? It sure would have helped to have had all of that out on the table in the spring of 2007, before the crisis hit hard in the fall of 2008. But Bush blocked that.

The German position (also widely held by conservatives here) is that while “markets” are a vast improvement over feudal or other forms of tyranny, they are not, by themselves, self-regulating or stable. The standard sports analogy is that to play soccer, or whatever, one needs accepted, legitimate, rules and referees and a fair playing field. One alternative is to have a dog-eat-dog, survival of the nastiest, society. That is certainly possible, but not broadly desirable. Even most dogs do not do that.

The Germans and others at the G20 summit will be insisting on improvements in oversight and regulations/standards for international financial activities.

That is the core issue for Germans at the summit. That issue is basically also one of democracy and the ability to have legitimate oversight and standards of international economic activity in the (global) economy. The “markets” are no longer only within nations, and there is now significant economic activity beyond the ability of any individual nation alone to exercise oversight and legitimate regulation.

That requires international agreements. Decisions about vehicle standards can be made for specific geographic areas. Democratic decisions are for the most part made within nation-states. But there is now significant international economic activity across boarders of any one nation, activity that can, and now has, caused vast damage. Recently, with much work, there had been a decline in infant mortality rates. Now they are climbing.

We will see what agreements will be reached at the G20. In any case international oversight and standards are on the agenda. The German position is that there be no geographical exception, and that all internationally active institutions and financial products be included.

An additional immediate agenda point regards international tax evasion problems. Most all governments are, or had better quickly be, concerned with that issue. The Swiss (after some recent legal pressure from the US Securities and Exchange Commission and from Germany) and following them a number of countries with “bank secrecy laws” have already agreed to accept international standards on cross-boarder tax issues.

The German position on emergency financial actions is now also fairly clear. They are taking a number of steps domestically, including with a view to dangers of hyperinflation/deflation. The Germans have a large stimulus package already and have the “automatic” anti-depression features in the social system. They are now watching to see the effects before doing more. There is a strong distinction made here between anti-depression “stimulus” efforts and dealing with the international financial system, including effects on small countries that are innocent by-standers and do not have large currency reserves. The Germans are, and are urging others, to increase the emergency facilities available to innocent countries with small reserves.

Current issues here about getting beyond the financial crisis involve “investment”, the business models of “banks” and “public investment”. What kind of economy can be gotten to “beyond” the crisis? Emergency “stimulus” packages are one thing, but just expanding the money supply another. When is a “stimulus” really an investment that helps create value, and when is it only a transfer of funds from one pocket to another? A financial “system” is one thing, the institutions in a system another.

While some Germans enjoy pointing the finger at the “monstrosity” of Anglo-Saxon fundamentalist market capitalism (to quote the conservative German President Mr. Koehler) there is also a German saying that if you point a finger at someone else several fingers are pointed back at yourself. Along with being very mad at some financial institutions and systems in the USA and Britain (and, formerly, Island), the Germany are intense about “investment processes” here.

Changing the system(s) also involves changing the decision-making processes of the institutions in the system, including processes of investment decisions. Germany already has some public banks. The labor unions have some rights, and have been flexing their muscles and their political planning. There is broad cultural agreement that “investment decisions” can also involve ethical, social and ecological dimensions that need to be “taken into account”, but are not usually “taken into account” as a market price factor. That is, not only is there an internal failure of the capital market, but there is also much more reality beyond the market, beyond the price and cost numbers normally “taken into account” as a market cost.

So the crisis of the capital market is not only a crisis within the market but also crises about realities “external” to the market such as ethics, social fairness and ecological viability. This week in Germany there is both a large conference on education for “sustainable development” that is socially fair and ecologically viable, and an international working meeting preparing for the Copenhagen Climate Summit in the autumn. In both there will be some focus on best practices on the local, regional and international levels that can be scaled up. A lot is on the plate.