Iran’s Covert Nuke Sites : How Many Are There? 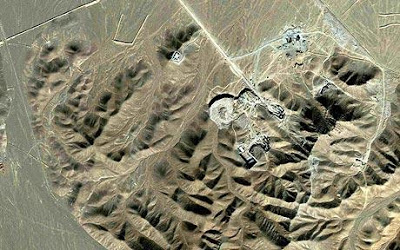 Uranium enrichment facility near the holy city of Qom in Iran. Photo from Reuters.
How many secret nuclear sites does Iran have?

In November 2004, the German magazine Der Spiegel revealed that Iran was digging a secret tunnel for a uranium enrichment facility near an existing site at Natanz, in Isfahan province. The Natanz facility was — and is — monitored by the International Atomic Energy Agency (IAEA).

Truthout, for which I was a senior editor at the time, published a summary of Der Spiegel’s story, though only after some late-night soul-searching. Der Spiegel had gotten its information from an unidentified intelligence agency, which could have been spreading disinformation to whip up support for Vice President Dick Cheney’s campaign to bomb Iran. But, on balance, the story fit with what we knew and our responsibility was first and foremost to bring our readers significant news reports from around the world.

Last Friday at the G-20 Summit in Pittsburgh, President Barack Obama revealed that Iran was building another secret underground enrichment facility, this one in a mountain on a military base near the holy city of Qom, some 100 kilometers southeast of Tehran.

Iran had failed to report the facility to the IAEA until September 21, claiming that it would be only a small pilot plant with a maximum of 3,000 centrifuges. Washington and its allies countered that this was big enough to produce one bomb’s worth of highly enriched uranium per year.

According to the New York Times, US intelligence officials acknowledged that they had no evidence that Iran has taken the final steps toward creating a bomb.

American, British, and French intelligence officials told journalists that they had known of the site “for a few years” through satellite reconnaissance and “multiple human intelligence sources.”

According to the Wall Street Journal, German and Israeli intelligence services began looking for a hidden site as early as 2002. They had been analyzing Iran’s nuclear purchases, and found items that the Natanz facility would not have needed.

“We knew the site existed, but at that time we didn’t know where,” a European intelligence officer told the Journal.

All of which raises a troubling question. Did Der Spiegel and Truthout get the story wrong five years ago? Or does Iran have a third enrichment facility yet to be acknowledged?

The world needs to know. Any nation with facilities to enrich uranium or reprocess plutonium can in time produce a nuclear weapon. The IAEA’s monitoring of those facilities and their output offers the only safeguard that other nations have under the Nuclear Non-Proliferation Treaty (NPT), which Iran has signed.

An unmonitored enrichment plant would also give Iran an added advantage. The facility at Natanz could produce low enriched industrial grade uranium without creating any problem with the IAEA. The secret facility could then further enrich the uranium to create weapons grade material.

This is why Secretary of State Hillary Clinton is not simply channeling Colin Powell at the United Nations in warning that Iran is moving toward weapons of mass destruction. She is right to insist that Iran prove to the world that all of its facilities are fully open to inspection.

Clinton would do better to drop her schoolmarm tone and “the West knows best” attitude. A little adult diplomacy might help the Iranians back down from their past lack of transparency. But, their past lack of candor makes it imperative for Iran to embrace full nuclear transparency in the talks in Geneva this week.

Nor does the need for transparency stop with Iran. The United States is currently allied with three other nations in the region — India, Pakistan and Israel — that have major nuclear arsenals, but flatly refuse to sign the NPT or accept full-scale IAEA monitoring. If the Obama administration means what it says about Iran and the threat of nuclear weapons, it is well past time for American officials to make the same demands on New Delhi, Islamabad and Tel Aviv that they are now making on Tehran.

Obama would also do well to get beyond repeating yet again that “all options are on the table.” The Iranians clearly know that the White House has just requested $88 million in emergency funding to modify our B-2 stealth bombers to carry a newly developed bunker-busting bomb that can destroy hardened underground targets.

That is more than enough saber-rattling, unless Obama wants to find himself forced by public hysteria to do to Iran what Dick Cheney never got to do.

[Steve Weissman is a former senior editor at Truthout. A veteran of the Berkeley Free Speech Movement and the New Left monthly Ramparts, Weissman lived for many years in London, working as a magazine writer and television producer. He now lives and works in France. For previous articles by Steve Weissman on The Rag Blog, including those about Iran and the “Green Revolution,” go here.]

This entry was posted in Rag Bloggers and tagged Iran, Nuclear Weapons. Bookmark the permalink.

2 Responses to Iran’s Covert Nuke Sites : How Many Are There?