James McEnteer : Our Chickens Will Come Home to Roost 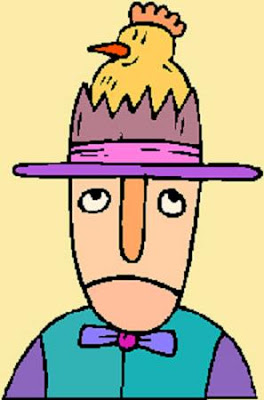 Roosting chicken from Yesteryear’s News
Whose side are we on?
Our chickens come home to roost

The U.S. styles itself a beacon of liberty but has turned its back on the democratic aspirations of human beings in every region of this planet.

The current crisis in Egypt has represented a profound dilemma for the United States, as Brookings Fellow Shadi Hamid, notes in The Atlantic. For 30 years, the U.S. has been the largest supporter of the Mubarak dictatorship. The United States has struck that same devil’s bargain repeatedly all over the world, supporting regimes which abuse the human rights of their own citizens, but which offer regional “stability.” We pay governments to support American political and economic interests over and against the popular will of their own people.

We supported Saddam Hussein for many years, until he crossed us. We support the murderous Colombian government because they protect Chiquita Brands and Coca Cola and Occidental Petroleum. Many such private U.S. corporations are themselves human rights abusers outside their home country, with no fear of reprisal from governments, domestic or foreign.

We bribe repressive Middle Eastern regimes like Egypt to make nice with Israel and repress their own dissidents. And of course, we support the oppressive Israeli regime itself, which seems to be taking its revenge for the Holocaust of World War Two by re-inflicting it on the Palestinians.

The U.S. styles itself a beacon of liberty but has turned its back on the democratic aspirations of human beings in every region of this planet. We want to keep the world safe, not for democracy, but for U.S. corporate profit.

Most Americans, and American mass media, are in denial about our muscular foreign policy, though it has remained consistent at least since the U.S.-Mexican War of the 1840s. Two-time Congressional Medal of Honor winner General Smedley Butler laid out U.S. corporate-military strategy succinctly in his classic War is a Racket.

Mr. Hamid’s article asks: “Could the U.S. find itself on the wrong side of history?” With all due respect, the U.S. has been proudly marching up and down the wrong side of history since World War II. The U.S. military triumph in that conflict proved a Pyrrhic victory. The United States became a world power and adopted a paranoid, proprietary approach to the planet, a tragedy that continues to haunt us. We developed Frankenstein security agencies and mega-weapons: the CIA, the NSA, the atom bomb, the hydrogen bomb and on and on.

Our official paranoia conjured The Communist Menace as a monolithic bogeyman to justify our own interventions on behalf of capitalism worldwide. Tim Weiner’s account of the CIA’s creation and operation in its earliest decades — Legacy of Ashes — details how the early failures of the agency begot ever larger catastrophes as their secret budgets mushroomed.

We began to overthrow democratically elected leaders (starting in Iran and Guatemala) and replace them with authoritarian rulers amenable to bribery, all in the name of national security and regional stability. But the world was neither more stable nor more secure.

We lost the Cold War too, because the process of waging it demanded a cynicism that undermined our American ideals more effectively than any Soviet propaganda ever could. The simplistic Manichean sensibility we developed in the Cold War era — of East vs. West, Us vs. Them — continued after the Soviet Union collapsed under the weight of its own mismanagement. It continues today.

Remember the Peace Dividend? That was supposed to be the glorious redirection of our military expenditures to domestic and humanitarian projects after the Cold War ended and the Berlin Wall came down. We could at last beat our swords into plowshares and rebuild our schools and roads and medical system. Surprise! There was no dividend because peace was a non-starter. The U.S. government could not imagine how to function in a world without enemies.

We still propped up useful despots. George H.W. Bush told Ferdinand Marcos, the Filipino dictator who imposed martial law and jailed or killed his political opponents: “We love your adherence to democratic principles and to the democratic process…” When Bush the younger declared that the 9/11 suicide pilots “hate us for our freedoms,” perhaps it was the Marcos-Mubarak brand of freedom he inadvertently meant. We supplied weapons to both sides in the Iran-Iraq war of the 1980s, but like all good things, it came to an end.

The United States needed a post-Cold War demonic other to justify metastasizing Pentagon budgets and military-industrial bloat. U.S. policymakers declared a war on drugs, but it proved a disappointing stopgap. Drugs were everywhere and nowhere. The more tons of drugs the U.S. interdicted and the more smugglers they busted, the more drugs and smugglers arose to take their place. Every victory showcased more defeat.

The War on Terror — featuring Radical Islam, Al Qaida, Osama bin Laden, and a shadowy cast of millions — proved a godsend for the megadeath war machine the U.S. government has become, justifying Strangelovian expenditures on armaments and foreign bases, along with multiple invasions of “strategic” countries. But the U.S. tendency to support repressive regimes only works if those regimes play ball. We can’t invade them all. Can we?

Popular Democracy — once the acknowledged U.S. brand — now seems to threaten the American political establishment, at home and abroad. Right-wing demagogues and the corporate political stooges in Congress and the Supreme Court have thus far kept the locals in line by misdirecting popular anger, invoking Jesus and stoking nativist fears of foreigners and infidels, including the president.

But Obama wants to show Wall Street he’s a pussycat, not a tiger: Let’s play. I won’t hurt you! The Mad Hatter runs the Tea Party but it doesn’t matter that it makes no sense, only that the party continues, with Glenn Beck as the White Rabbit (o my o my) and Rupert Murdoch as March Hare. One lump or two?

Obama’s Chicago pastor, the Reverand Jeremiah Wright, drew self-righteous media scorn in 2008 when he described the September 11 attacks as payback for U.S. terrorism and said “American’s chickens are coming home to roost.” He was merely stating the obvious, but America failed to learn from that event or to do any soul-searching. The Bush-Cheney junta simply used those attacks to justify more waves of violence which have never ended.

America’s chickens will continue coming home to roost, in Egypt and throughout the Middle East and Latin America. Popular uprisings are not an Islamic plot against The Free World — wherever that may be now — but simply a logical consequence of denying people their basic human rights and hoping they’ll be too intimidated to object. But it is only the majority of Americans who appear intimidated.

We the people have outsourced our own justifiable political outrage and our capacity to protest wrongs. Do we figure others — in say, Egypt and Tunisia — can do it more cheaply that we can? Maybe this time the revolution will be televised and we can just sit back, relax with our favorite beverage, and watch. No one does passivity better than we do. Ask any dittohead. And anyone who tells you any different is a liar or a foreigner or probably both.

2 Responses to James McEnteer : Our Chickens Will Come Home to Roost