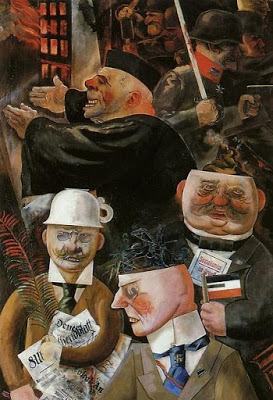 Whether or not the U.S. is at a ‘Weimar moment,’ those who are concerned about such a possibility should not be accused of needlessly worrying that “the sky is falling.”

“When and if fascism comes to America…it will not even be called fascism; it will be called, of course, ‘Americanism.'” — Prof. Halford E. Luccock, Yale University Divinity School, quoted in The New York Times, September 12, 1938.

Is fascism imminent in the United States? This is a not a new question, it has been debated for decades. For more than 100 years it’s been argued that a serious crisis threatening the political and economic order may well lead to a right-wing takeover.

When such a crisis reaches a prospective tipping point, the question becomes: will society pull back at the last minute, or will it take the plunge into authoritarianism? This potential tipping point is sometimes referred to as a “Weimar” moment, after the German republic that led up to Hitler and the Nazis.

Even before the term fascism was coined, an authoritarian takeover in the U.S. was the inspiration for Jack London’s 1908 novel The Iron Heel. When fascism did come about in Europe, the fictional theme was picked up by Sinclair Lewis in his 1935 It Can’t Happen Here, and in 1962 it even found its way into science fiction, with Philip K. Dick’s The Man in the High Castle. Perhaps sensing a rekindled interest in this subject, in 2004 Phillip Roth wrote of a fascist electoral victory in his The Plot Against America.

Whether or not fascism or authoritarianism is at hand has also been of interest to social researchers, historians, and other non-fiction writers, as in Herbert Marcuse’s 1972 Counterrevolution in Revolt, Bertram Gross’s 1980 landmark Friendly Fascism, and Sheldon S. Wolin’s 2008 Democracy Inc.

Reportedly, a plot was hatched in 1934 against the “New Deal” government of Franklin D. Roosevelt. Quoted in a 2005 Daily Kos article, U.S. Ambassador to Germany William Dodd wrote that

a clique of U.S. industrialists is hell-bent to bring a fascist state to supplant our democratic government…a prominent executive of one of the largest corporations told me point blank that he would be ready to take definite action to bring fascism into America if President Roosevelt continued his progressive policies. Certain American industrialists had a great deal to do with bringing fascist regimes into being in both Germany and Italy.

How and when such a takeover might occur is often framed with a comparison of the current U.S. experience with the Republic of 1919-1933, named Weimar after the town where it was formed. In one final desperate bid for a World War I victory, Germany’s naval high command decided in October 1918 to attack the blockading British fleet. Influenced by the Soviet revolution the preceding year, having already had enough of the war, and viewing the proposed attack as suicidal, the sailors of the German fleet anchored at Kiel revolted.

On November 7, a popular revolt against the war and in favor of a popular government to replace the monarchy of Wilhelm II broke out in Munich. These revolts, combined with a destitute economy and exhausted population, left Germany with little choice but to sue for peace. An armistice, the Versailles Treaty, was imposed that was very favorable toward the victorious Allies and was widely viewed as a humiliation within Germany. Although both revolts were crushed, on November 9 the monarchy of William II was brought down.

From the beginning Weimar was unpopular. According to historian Louis Snyder, its initial leaders were held responsible for ending the war on unfavorable terms, while the monarchy and military escaped blame for the disaster that had befallen the country. A split within the ruling Social Democratic Party soon ensued, with the minority Spartacist faction under the leadership of Karl Liebknecht and Rosa Luxemburg forming the Communist Party of Germany. In factional fighting that broke out on January 11, 1919, Liebknecht and Luxemburg were murdered by right-wing troops with whom the majority had sided.

An uneasy coalition of Social Democrats with those to their right prevailed for the next 14 years. During this period, of all the industrialized nations, the German economy was hit the hardest by the Great Depression. By November 1923, the German mark had sunk to its lowest value; stories abound of how money was used as wallpaper, to fire up stoves, and so on. That same month, the Nazis staged their infamous Beer Hall Putsch.

1925 proved to be a critical election year. Rather than rallying around Wilhelm Marx, the centrist candidate, the left was split, with Communists running their own candidate, Ernst Thalmann. As a result, Paul von Hindenburg, the candidate of the nationalists, monarchists, religious traditionalists, and conservatives, was elected president. Under the aging and relatively ineffective Hindenburg, the Republic limped along until its last election in 1932.

Between 1925 and 1932 the Nazis grew tremendously. They not only blamed external forces for Germany’s predicament, but internal enemies such as the Social Democrats and the Communists, as well as scapegoats such as the Jews. By the 1932 elections, the Nazis were Germany’s single largest party. Hindenburg had once been viewed as a rightist candidate, but now his candidacy was supported by those seeking to block the Nazis. According to William Allen, the Social Democrats actively campaigned for Hindenburg as the “lesser evil.”

The Communists again ran Thalmann as their candidate. Louis Snyder relates that the Social Democrats “hated the Communists even more than they hated the Nazis.” Hindenburg won a narrow plurality in 1932. On January 30, 1933, he appointed Hitler as chancellor, effectively ending the Weimar Republic.

In the United States, there have been two other periods since World War II where the far right has made significant gains. The first was during McCarthyism in the 1950s and 1960s. Wisconsin Senator Joe McCarthy manipulated anti-Soviet Cold War fears to create a climate of repression. This receded when it became apparent his self-serving motives had gone too far and public attention shifted to the “New Frontier” of President John F. Kennedy, the emerging civil rights movement, and the onset of the Vietnam War.

The second period, which might be termed a long-term sweep, began in the late 1960s under President Nixon as a so-called “silent majority” backlash against the civil rights and anti-war movements, women’s liberation, and anti-establishment politics generally. While there was no underlying economic crisis, elite groups and their right-wing allies were fearful that the gains of these movements threatened the overall system.

Initiatives to roll back gains achieved by the left picked up speed in the mid-1970s through the early 1980s with the formation of the political New Right and the religious “Moral Majority.” Through direct mail techniques, organizing for local elections, and with a base in religious fundamentalism, the “counterrevolution” built strength and enjoyed some successes. All of this groundwork played a key role in the 1980 election of Ronald Reagan, who in turn substantially contributed to the expansion of the right-wing agenda.

These trends were all exacerbated by the terrorist attacks of September 11, 2001, and more explicitly, by the onset of the economic crisis and the election of Barack Obama in 2008. Largely funded by elite business interests and organized by their operatives, the Tea Party undertook vociferous opposition to Obama, the Democrats, and the left. Through an orchestrated effort, right-wing thugs disrupted town hall forums on health care.

Tea Party members began showing up at political events wearing guns, or carrying signs denouncing President Obama as a socialist or communist, or employing racist caricatures of him. Threats of violence were made against other Democrats, and violent acts were carried out, including the 2009 assassination of Kansas abortion provider Dr. George Tiller. As the Nazis had scapegoated those who were relatively powerless, most particularly the Jews, far-right elements in the U.S. began to scapegoat Muslims, immigrants, and women seeking to exercise their rights, among others.

President Obama has shown no interest in protecting the Bill of Rights or repealing legislation put in place since 2001. Indeed, violations of civil liberties and human rights have increased under his watch. Police attacks against Occupy demonstrators showed evidence of national coordination and an intolerance of dissent. Regulations against demonstrations on federal property have been tightened.

While obvious comparisons can be made between the Weimar experience and what is taking place in the U.S. today, no two historical circumstances are exactly the same. Theses that speak of an encroaching authoritarianism can readily find supporting evidence. It can also be said that, like the Weimar Republic, the Democratic Party is in a role somewhat analogous to that of the Social Democrats.

As Marcuse pointed out, there is evidence of a long-term trend to firmly establish a permanent counterrevolution. Virtually every Republican presidency since that of Nixon has promoted this tendency, and every Democratic presidency has moderately slowed its advance while willingly or grudgingly giving ground.

Whether or not the U.S. is at a “Weimar moment,” those who are concerned about such a possibility should not be accused of needlessly worrying that “the sky is falling.” It should be regarded as prudent to act as if such a “moment” may be a distinct possibility, and to do all that is possible to stop it from happening. If there is one lesson to be taken from the Weimar Republic, it is to act effectively before it is too late.

[Jay D. Jurie graduated from the University of Colorado and Arizona State University. He researches and writes in the areas of public policy, public administration, and urban and regional planning, and lives in Sanford, Florida. Read articles by Jay D. Jurie on The Rag Blog.]

References and sources for further reading: