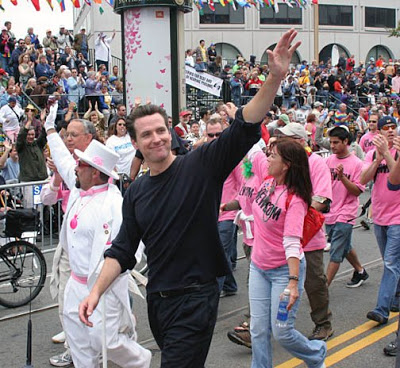 San Francisco mayor Gavin Newsom has always been a vocal supporter of diversity and the GLBT community.
‘As an enthusiastic gay Obama supporter, I can see that his choice of a homophobe preacher is a gratuitous political gaffe that he didn’t have to make.’
By Jeff Jones / The Rag Blog / December 19, 2008

SAN FRANCISCO — Although conventional wisdom holds there are two sides to every story, there are some issues that really do not have two sides. What is the other side of racial equality? What is the other side of anti-Semitism? Surely, Obama would not have anyone be part of his inauguration who was an overt racist or an anti-semite. But apparently, whether the nation’s LGBT residents deserve to be treated equally is still up for debate.

As an enthusiastic gay Obama supporter, I can see that his choice of a homophobe preacher is a gratuitous political gaffe that he didn’t have to make. Clinton made a big mistake by getting involved in the “Don’t Ask/Don’t Tell” controversy at the very outset of his administration; I am very surprised that Obama has now made the same mistake.

Unfortunately, I don’t think Obama knows how bitter Queer Californians feel about the religious right’s passage of Proposition 8: it means discrimination against the LGBT community is now legal in California. Obama has put himself in the unenviable position of having to defend homophobia, since Warren was a militant advocate of Prop. 8. Although this situation will probably get nastier — there will inevitably be Queer protestors on Jan 20– after he’s sworn in Obama might feel compelled to repeal Don’t Ask/Don’t Tell, pass federal legislation to end LGBT discrimination, and maybe end the discriminatory exclusion of LGBT artists from federal arts funding. In the interim, here’s a sample of how San Francisco’s elected officials are reacting to this situation:

The mayor said the decision is painful for the gay and lesbian community, especially in California, where people are still reeling from the passage of Prop. 8.

“The gay community has every right to be upset,” Newsom said. “I hope people appreciate that Rick Warren was not just indirectly involved but very involved in taking people’s rights away. I’m disappointed, but I understand the decision.

“Rick Warren is not someone who has been a champion of gay rights, and the president-elect could not be naive to that, yet he felt that the other attributes outweighed that,” Newsom said.

Warren’s other attributes are not enough for state Sen. Mark Leno, D-San Francisco.

“His work on HIV/AIDS is laudable, but that doesn’t change the fact that he thinks I am a second-class citizen and should be denied fundamental rights guaranteed to me in a constitutional democracy,” Leno said.

“My concern is the selection of Rick Warren goes far beyond Proposition 8. He has spent a lifetime disparaging and disregarding the LGBT community,” Leno said.

“It’s sad that it’s become political,” Kuipers said. “We can agree to disagree, but that shouldn’t interfere with our ability to pray for each other as a nation.”

San Francisco Supervisor Bevan Dufty first heard of Warren’s selection in a text message from a friend in South Africa.

Dufty said he is perplexed but is giving Obama the benefit of the doubt.

“It’s difficult to understand, but I would like to look back on this in a year or two and see it was a longer-term effort to heal division in this country,” he said. “Maybe strategically we’ll see something positive in this in the future, but right now, it doesn’t make much sense.”

“Rick Warren is clearly divisive and anti-gay. He is a kinder, gentler dose of Jerry Falwell and Oral Roberts. He presents himself as a warm and fuzzy new-age version of the same old stuff,” she said.

“I think Obama did this because he has been under such scrutiny throughout the campaign about his legitimacy as a person of Christian faith. Maybe he sees this also as a way to give a nod of thanks and gratitude to voters who come from the evangelical right.”

“I’m very upset. I can understand that Obama wants to be inclusive but not at this moment in his life and the life of this nation. We should be pulling people together. It is most unfortunate. Rick Warren belongs to a conservative evangelical group that is divisive and in some regards mean-spirited.”

[Rag Blog contributor Jeff Jones, a San Francisco-based advocate for social justice and GLBT rights, is a former Austin activist who worked with the sixties underground paper The Rag and was president of the student body at the University of Texas-Austin.]