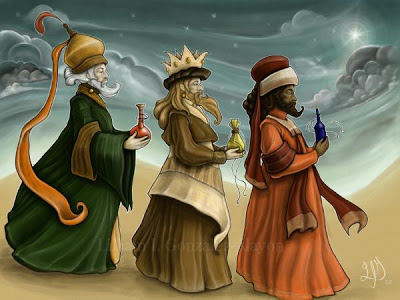 Three wise men arrested for illegal possession of “frankincense” and “myrrh.” Art from Dare to Create.
Christmas is no time to
talk about war and peace

When the angels sang, ‘peace on earth good will to all,’ they were expressing the song written in every heart. But, that song calls us out of empire and into our entire human family.

When I heard the President speak to returning troops last week, my mind flashed back to an article I once wrote for our local newspaper. Each week a different member of the local clergy would write a column, and I had been asked to write the piece for Christmas.

That year all I could hear was the drumbeat leading toward a war with Iraq. I racked my brain trying to think of a way to put faces on the people we were about to bomb. Looking at a nativity scene I thought, “the people we are about to kill look like that.” Maybe a reframed Christmas story could help Americans stop hating Saddam long enough to care about the people who will pay the real cost of this invasion.

I submitted the following article, covering the Christmas story the way the U.S. press was covering the build-up to the Iraq war. Looking back, I should have known what was about to happen.

Christmas Cancelled as a Security Measure

ELLIS ISLAND — The three wise men were arrested today attempting to enter the country. The Iraqi nationals were carrying massive amounts of flammable substances known as “frankincense” and “myrrh.” While not explosives themselves, experts revealed that these two substances could be used as a fuse to detonate a larger bomb. The three alleged terrorists were also carrying gold, presumably to finance the rest of their mission.

Also implicated in the plot were two Palestinians named Joseph and Mary. An anonymous source close to the family overheard Mary bragging that her son would “bring down the mighty from their thrones and lift up the lowly.” In what appears to be a call to anarchy, the couple claims their son will someday “help prisoners escape captivity.” “These people match our terrorist profile perfectly,” an official source reported.

All of the suspects claimed they heard angels singing of a new era of hope for the afflicted and poor. As one Wall Street official put it, “These one world wackos are talking about overturning the entire economic and political hierarchy that holds the civilized world together. I don’t care what some angel sang; God wants the status quo — by definition.”

A somber White House press secretary announced that it might be prudent to cancel Christmas until others in the plot are rounded up. “I assure you that this measure is temporary. The President loves Christmas as much as anyone. People can still shop and give expensive gifts, but we’re asking them not to think about world peace until after we have rid the world of evil people. For Americans to sing, ‘peace on earth, good will to all’, is just the wrong message to send to our enemies at this time.”

The strongest opponents of the Christmas ban were the representatives of retail stores, movie chains and makers of porcelain Christmas figurines. “This is a tempest in a teapot,” fumed one unnamed business owner. “No one thinks of the political meaning of Christmas any more. Christmas isn’t about a savior who will bring hope to the outcasts of the world; it’s about nativity scenes and beautiful lights. History has shown that mature people are perfectly capable of singing hymns about world peace while still supporting whatever war our leaders deem necessary. People long ago stopped tying religion to the real events in the world.”

There has been no word on where the suspects are being kept, or when their trial might be held. Authorities are asking citizens who see other foreigners resembling nativity scene figures to contact the Office of Homeland Security.

A few days after submitting that piece, I received a nervous call from an editor. “We love your story. It’s very funny.”

“Thank you,” I said waiting for the other shoe to fall.

“The thing is, we want to take out the part about Iraq and Palestine.”

After a horrified pause, I explained that had been the whole point of writing the story — to humanize the people who were about to be killed. When I refused to gut the story, he told me they would have to drop it all together.

I shouldn’t have been surprised. Clergy who want to talk about real events in the world are seen as too political for the religious section, and too religious for the political section. Of course, if a minister gets in the pulpit and waves the flag and prays for the troops, that’s not called “political,” but if a minister questions any war, then it is considered mixing religion and politics. The resulting pablum in most clergy columns validates their strategic placement somewhere between the obituaries and the comics.

What have we learned as a result of the war? That was answered by Obama’s words to the returning troops:

Because of you — because you sacrificed so much for a people that you had never met — Iraqis have a chance to forge their own destiny. That’s part of what makes us special as Americans. Unlike the old empires, we don’t make these sacrifices for territory or for resources. We do it because it’s right. There can be no fuller expression of America’s support for self-determination than our leaving Iraq to its people. That says something about who we are.

Looking back at my earlier Christmas article, I feel pain not pride at what the President said. His speech to returning troops could have been taken from any leader, of any nation, from any period of history, simply by changing the names and places. It is the kind of speech every leader has given since the emperors: brave and noble words, written in someone else’s blood.

This President who ran, in part, against this war, has come to repeat the party line. This President, who once spoke of respect for all people of the world, has now deported more immigrants than Bush.

Hearing another speech expressing our nation’s narcissistic delusion made me physically ill. I could not help but think of the bloody wake such rhetoric leaves behind when put into action. The fact that we are leaving Iraq at this point says nothing about the purity of our initial motives. Even bank robbers don’t stay around after the crime has been committed.

I appreciate trying to make our young soldiers not feel like they were pawns in someone else’s parlor game, but for the sake of future generations we must painfully remember and affirm, that is exactly what happened.

We, from the United States, are not like the people in our nativity scenes. We are like the Romans looming ominously in the background of the story. Christmas is about the little people of the world who find joy and meaning while living under someone else’s boot. We from the United States can only celebrate Christmas by ending our cultural narcissism, renouncing empire, and making room for the poor and the weak of the world like Joseph and Mary.

Christmas is not a fact of history, but Christianity’s particular symbol of every human being’s hope for world peace and universal happiness. When the angels sang, “peace on earth good will to all,” they were expressing the song written in every heart. But, that song calls us out of empire and into our entire human family.

Maybe stopping the frenzy of Christmas long enough to really hear the song the angels sang to the wretched of the earth, would give us the humanity to stop hanging our Christmas lights until we no longer kill our brothers and sisters for the fuel to illumine them.

O ye beneath life’s crushing load, whose forms are bending low,
Who toil along the climbing way with painful steps and slow;
Look now, for glad and golden hours come swiftly on the wing;
Oh rest beside the weary road and hear the angels sing.