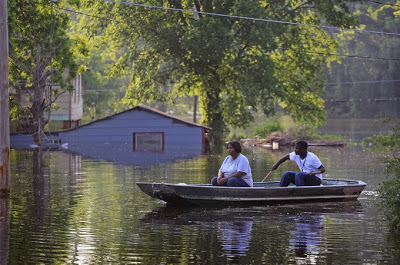 Many residents have been forced from their homes as a spillway is opened to protect major cities from the flood. Photo by Gallo / Getty / Al Jazeera.
One disaster after another:
Mississippi flood renews Gulf Coast anxieties

NEW ORLEANS — Byron Encalade grew up in the swamps of southeast Louisiana, a place where day-to-day life hasn’t changed much in generations. “I grew up tying my Pirogue to the front porch when the tide would come up,” he says. “For a lot of us born and raised fishing and trapping and hunting, it’s a way of life.”

That way of life is now in danger.

First there was Hurricane Katrina and Hurricane Rita, two storms in 2005 that famously devastated the Gulf Coast, and literally changed the map of southern Louisiana, quickening already-rapid coastal erosion while destroying homes and communities. Just as coastal residents had begun to recover from those storms, last year’s BP Deepwater Horizon drilling disaster had a catastrophic effect on the economy and health of the region and its people.

Now, the waters of the Mississippi River have reached historic heights, and Encalade is worried. “For the small fishers, it’s a very thin line between losing money and making a profit,” he explains.

The Mississippi is central to economic life here on the Gulf, and it’s rising waters have wide-ranging effects, from disrupting shipping and causing rising prices for gas, food, and other necessities, to a loss of tourism dollars and the destruction of an estimated 100,000 acres of crops, as well as oyster fisheries, in the now-flooded Atchafalaya Basin.

A third generation oyster fisherman, Encalade serves as president of the Louisiana Oystermen Association, which represents minority fishers, including African-American, Vietnamese and Cambodian and Native Americans. “This flooding is going to have a enormous economic effect in the fisheries,” he explains.

The U.S. Army Corps of Engineers, the federal agency charged with maintaining the levees and overseeing the flood controls, has acted to preserve the safety of Baton Rouge and New Orleans; two cities perched along the Mississippi. To reduce the stress on the levees around the urban areas, the Corps has let water flow through the Morganza Spillway, flooding farmland and rural communities upriver from Baton Rouge, including thousands of houses, farms and oyster fisheries.

The Morganza, a flood control structure designed and built in the aftermath of a devastating 1927 flood of the Mississippi, has only been opened once before, in 1973.

While no one can say for sure the lasting effects of this flooding, optimism is rare. “The oyster people, they’re screwed again,” says George Barisich, president of the United Commercial Fisherman’s Association. “The oysters that survived the BP spill, they’re going to die now.”

Barisich, a fisherman who lives and works in southern Louisiana, says that across the Gulf Coast fishing industry, people have been hit hard, both economically and personally. “A lot of people, this is wearing down on them,” he says. “For the people with the small boats, it’s going to wipe them out. People have heart attacks over this.”

The high waters in the Mississippi have brought into focus problems that have existed for a generation. Land loss caused by oil company drilling has already displaced many who lived by the coast, and the pollution from treatment plants has poisoned communities across the state — especially in “cancer alley,” the corridor of industrial facilities along the Mississippi River south of Baton Rouge.

Matt Rota, science and water policy director for the Gulf Restoration Network, says that pollution carried by the Mississippi will create a massive “dead zone,” a lifeless stretch of water that he says will further harm the Gulf ecosystem and impact fishers.

According to Rota, the combination of oil company exploration with the construction of levees that have cut off the natural delta-building processes of the river has resulted in a massive loss of coastal land. The state loses a football field-sized area of its coast every 45 minutes, he says. Since 1930, Louisiana has lost over a million acres of land, an area the size of a small state.

While plans have been drafted to stop the erosion and replace the coast, the federal government has never found the money to actually follow through. “I’m seeing this as a squandered opportunity,” he says. “We need to build our wetlands and build our coast instead of losing it.”

Even with the Morganza open, high water levels continue to alarm residents of New Orleans, who are suspicious of the Army Corps of Engineers. “We can’t trust the levees, and we cant trust the Corps,” says Monique Harden, the co-director Advocates for Environmental Human Rights.

Harden, as with many Gulf residents, lost trust in the Corps after faulty construction and maintenance allowed the levees to fail in the wake of Hurricane Katrina. Her organization has worked to bring accountability to the U.S. government, even bringing charges of environmental injustice on the part of the U.S. to the United Nations. “This whole thing is going to be weeks, not days,” she says. “And no one’s giving any guarantees.”

Matt Rota of Gulf Restoration Network thinks the whole system of flood control needs to be rethought. “We’re still stuck in this opinion that we can control the Mississippi River,” he says. “We need to shift our thinking and let the river have more room. We’ve walled off the Mississippi from the vast majority of its floodplain.”

While freeing the river in these areas would carry great costs, it would also help restore the coast, and ease pressure on other levees, such as those protecting New Orleans, explains Rota.

“Right now, we’re very confident in the system we have,” responds Mike Petersen, public affairs officer for the Corps, when asked about the concerns expressed by Harden and Rota. However, says Petersen, there are still risks. “There’s no such thing as a flood-proof levee,” he acknowledges. “Although the system works beautifully now, it’s taking a beating like it never has before.”

First Sergeant Jimmy Hankins, with the New Orleans office of the Army Corps of Engineers, says he understands people’s fears. “People in New Orleans are always concerned about their levees. Were under sea level.” But he says New Orleans is safe. “Of course, we always recommend to be safe and concerned,” he added. “But the best levees there are, are the ones on the Mississippi because they’re tested every day.”

Byron Encalade doesn’t want to talk too much about the Army Corps or other federal agencies. “It gets to the point when you’re tired of saying who’s at fault,” he says. “Lets move forward with a solution.”

For Encalade, this means a comprehensive approach that repairs the Gulf, restores the coast, and maintains the freshwater, brackish water, and saltwater marshes so important to fisher communities and local ecosystems. “To do a plan that leaves out a part of it is to ruin it,” he says. For Encalade, whose family has been fishing here for generations, there is no other choice. “I just don’t know where else to go. I can’t live anywhere else. Louisiana is me.”

[Jordan Flaherty is a journalist and staffer with the Louisiana Justice Institute. His award-winning reporting from the Gulf Coast has been featured in a range of outlets including The New York Times, Al Jazeera, and Argentina’s Clarin newspaper. His new book is FLOODLINES: Community and Resistance from Katrina to the Jena Six. He can be reached at neworleans@leftturn.org, and more information about Floodlines can be found at floodlines.org. This article was also published at Al Jazeera. Find more articles by Jordan Flaherty on The Rag Blog.]