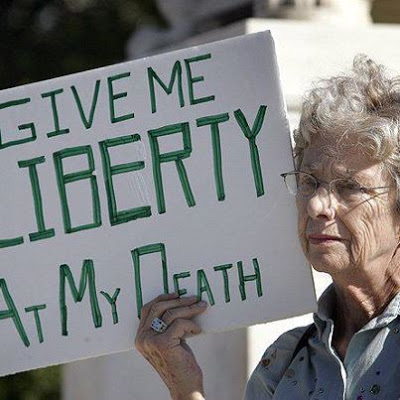 If I decide that it is time for my life to come to an end for reasons important to me, that should be my decision.

“The greatest human freedom is to live, and die, according to one’s own desires and beliefs. From advance directives to physician-assisted dying, death with dignity is a movement to provide options for the dying to control their own end-of-life care.” — Statement from the Death with Dignity National Center

Since the founding of this country, the ideal of individualism has always been balanced with the ideal of community. Conflicts between the two concepts usually involve taking one person’s property or altering property rights for the betterment of the whole community, or preventing individual behaviors that might be harmful to the community as a whole (such as shooting a gun in the city, or failing to report communicable diseases to health authorities, to enable treatment or quarantine of an individual).

But individualism went down to defeat in a vote on November 6 in Massachusetts for reasons unrelated to the best interests of the community. That state was voting on a so-called Death with Dignity initiative that would have made Massachusetts the third state to officially adopt a law that recognizes the right of terminally-ill persons to end their own lives with self-administered lethal drugs prescribed by their physicians to end their suffering.

The prescription would be made available only after many safeguards are implemented. Oregon and Washington have similar laws and Montana’s Supreme Court has recognized such a right in that state’s constitution.

The Massachusetts proposal was modeled after the 1997 Oregon law that was the first Death with Dignity Act (DWDA) adopted in the nation. This choice of death with dignity appears not to have been abused according to the reports made each year by the Oregon Public Health Division. Since the law took effect in 1998 and through 2011, 596 Oregonians have ended their lives using the law. During this same time, 339 others obtained the prescription drugs, but did not use them.

The 2011 Public Health report noted that the three most frequently mentioned reasons for using the law were “decreasing ability to participate in activities that made life enjoyable (90.1%), loss of autonomy (88.7%), and loss of dignity (74.6%).” These appear to be the same concerns expressed by others since the law took effect. Over 82% of patients who used the DWDA in 2011 had some form of terminal cancer, a figure that has been consistent over the years since the law took effect.

The Public Health report reveals that 94.1% of patients who used the DWDA last year died at home; 96.7% were enrolled in hospice care either at the time the DWDA prescription was written or at the time of death; and 96.7% had some form of health care insurance. These data have been fairly consistent throughout the years since the DWDA was enacted in Oregon.

Undoubtedly, Oregon’s health care system, especially its hospice care, has been a primary reason that the law has not been used by more people. A notable benefit of the law has been an improvement in Oregon’s end-of-life care, especially pain control.

But a similar law proposed for Massachusetts was narrowly defeated — 51% to 49%. Opposition came mainly from the Catholic church and a group of disability activists associated with Not Dead Yet. My personal involvement with promoting the rights of the disabled as an attorney for the last 35 years and my experience with caring for disabled parents for several years has created a great deal of dissonance for me as I have listened to the arguments made by disability rights activists against Death with Dignity proposals.

In the mid-90s, I became involved personally with the Death with Dignity movement, first by helping to organize a chapter of Hemlock in the Austin area, then in support of Compassion & Choices (the successor to Hemlock through a merger), and now with the Final Exit Network.

I have favored death with dignity laws because of my support for the personal autonomy and the individual rights I believe all people should have to make decisions about their lives. I have not seen this issue as creating conflict between the ideals of individualism and community. For me, the decision to end one’s life to end one’s suffering is purely an individual decision. But that’s not how other disability rights advocates see it.

Many of the arguments made by Not Dead Yet and others in Massachusetts focused on how Oregon carries out its DWDA, according to Melissa Barber, an Electronics Commination Specialist with the Death with Dignity National Center. They argued that doctors can’t accurately predict when a patient will die, that there isn’t a requirement for people to tell their families they’ve requested the medication, that there’s no required psychological evaluation, and that patients who request the medication might not talk to hospice and palliative care professionals.

But all of these arguments are false or misleading. For example, in Oregon two doctors must find that the person requesting a lethal prescription has six months or less to live. It should be obvious that no one can accurately predict exactly when a person with a terminal illness will die, but physicians apply their clinical experience and their knowledge of the course of an illness to determine whether a person has six months or less to live.

It matters little whether I have six days or six years to live. If I decide that it is time for my life to come to an end for reasons important to me, that should be my decision. The accuracy of a doctor’s informed opinion about my life expectancy is beside the point.

Although patients in Oregon are encouraged to talk with their families and loved ones about their decision to request lethal medication, it is the patient’s choice whom to talk to about this decision. If I need a “feeding tube” to get adequate nutrition, whether I get it is my choice. I may or may not talk with family members about the decision, though I am sure I will be encouraged to talk with family members about the matter.

This is true of all medical decisions made by mentally competent adults. A decision about asking for lethal medication should be no different.

The argument about “no required psychological evaluation” is likewise specious. In Oregon, two independent physicians evaluate the patient for signs of depression. If they detect signs, they refer the patient to a mental health specialist.

Although many people believe that anyone who chooses to stop their suffering before what we call a natural death is mentally ill, there are no data to support such a position. Having my life controlled by another person’s fear or belief takes away my autonomy to decide what is best for me.

Lack of access to adequate health services is unlikely to be a reason for choosing to end one’s life shortly before it would end as a result of some terminal illness. The overwhelming number of Oregonians who choose to use the DWDA are in hospice care and have health insurance — almost 97% of them. And about 40% of Oregonians who obtain lethal medications do not use them, which indicates that the system is not pushing people to hurry up and die, another argument frequently used to oppose death with dignity laws.

Perhaps the Not Dead Yet activists are concerned about a variation of the slippery slope argument, applied to those with permanent disabilities. Their position is that some people fear disability more than death. They assert that all people with a terminal illness will become disabled at some point during their illness. Because some people can’t accept this disability, they want to die rather than live through the disability to a “natural” end.

Such a desire is an indirect threat to people who choose to make the best of their disability and live with it. They fear that disability will come to be seen as a condition that should not be tolerated, leading to the killing of disabled people against their will.

In effect, they are saying that if I have a terminal illness, I can’t decide to end my life at a time of my choosing because it is not the decision they would make, and it might lead to euthanasia of the disabled.

I’m Not Dead Yet, either, but I’ll not try to control how others live or die.