Lamar W. Hankins : Natural Gas and the Perils of Fracking 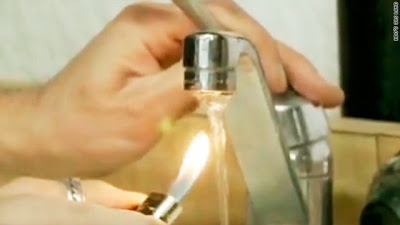 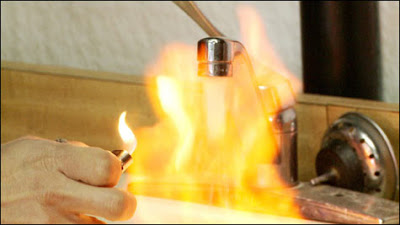 Light my fire. Images from the documentary film, Gasland.
The perils of fracking:
Protecting our water
from natural gas production

Anyone who drinks water has a stake in the production of natural gas. You don’t have to own a gas well to be concerned about how natural gas is produced. All you have to do is be fond of drinking safe water.

We’ve heard a lot in recent years that the answer to this nation’s energy needs is greater use of natural gas, which is available in the United States in great abundance, rivaling the oil found in Saudi Arabia according to some sources. Watching the documentary film Gasland, an independent production by Josh Fox, reminded me of another public health issue of several years ago.

A committee hearing before the House Energy and Commerce Committee in 2009 included testimony from representatives of several major gas drilling companies. They were questioned about the practice of hydraulic fracturing (fracking) during the natural gas drilling process. Fracking is the use of hundreds of chemicals to break up the shale formations in which natural gas is confined so that the gas can be captured for use.

The drilling companies, whose representatives were shown testifying in Gasland, had enlisted the assistance of then Vice President Dick Cheney in 2005 to have fracking exempted from the requirements of several environmental laws so that they would not have to report the injection of hundreds of known carcinogens and volatile compounds into the ground.

Sen. Bob Casey, Rep. Diana DeGette, Rep. Maurice Hinchey, and Rep. Jared Polis issued this description of fracking when bills to overturn the exemption were introduced in both houses of Congress in 2009:

[Fracking is] a process whereby fluids are injected at high pressure into underground rock formations to blast them open and increase the flow of fossil fuels. This injection of unknown and potentially toxic chemicals often occurs near drinking water wells. Troubling incidents have occurred around the country where people became ill after fracking operations began in their communities. Some chemicals that are known to have been used in fracking include diesel fuel, benzene, industrial solvents, and other carcinogens and endocrine disrupters.

Fracking is used in the production of both natural gas and oil.

Rep. Polis included this in a press release:

It is irresponsible to stand by while innocent people are getting sick because of an industry exemption that Dick Cheney snuck in to our nation’s energy policy. Many new sources of energy, including natural gas, will play an important role in our nation’s transition to cleaner fuels, but we must make sure this isn’t at the expense of public health. The problem is not natural gas or even hydraulic fracturing itself. The problem is that dangerous chemicals are being injected into the earth, polluting our water sources, without any oversight whatsoever.

The film Gasland is all about the concerns expressed succinctly by Rep. Polis. To gather information for his film, Josh Fox drove around this country from Pennsylvania and New York to Wyoming, New Mexico, and Texas.

While the federal government has yet to act to control fracking, a few other governments have become concerned enough about the production of natural gas to pay for studies of their own.

Most notable is the town of Dish, Texas. located near Denton. (The town changed its name from Clark to Dish in a deal with the satellite cable company of the same name in exchange for the company providing free satellite service to all of Dish’s 200 residents for 10 years).

The study paid for by Dish (the town) found extremely high levels of both carcinogens and neurotoxins in the environment after extensive natural gas production was done in the area in 2009. In early March, Dish sued six drilling companies that run a network of natural gas compressors and pipelines in the town. Both air pollution and water contamination problems have been noted in and around Dish.

Perhaps the most dramatic footage shown in Gasland is the lighting of water coming right out of home water faucets in several locations around the country where gas drilling has been done using fracking. The streams of water that catch on fire may be the result of some of the chemicals used in fracking, or from natural gas that fracking has released into the ground water, or a combination of both.

In all cases, the source of the flammable water was water wells that had produced potable water until the gas drilling had been done.

Calvin Tillman, until recently the mayor of Dish, has no faith in the Texas Commission on Environmental Quality, the Texas Department of State Health Services, or any other state or federal agency to look after the health of Texans. He believes that they exist to protect the well-being of the industries they are supposed to regulate.

The health hazards of natural gas production appear to be another case involving an industry too powerful to be held accountable for its actions. And the Texas Legislature, which is owned by the corporations, will do nothing to change that situation. But this past week Reps. Diana DeGette and Jared Polis once again introduced the Fracturing Responsibility and Awareness of Chemicals Act (FRAC Act) to regain federal regulatory authority over fracking.

The FRAC Act did not pass when the Democrats controlled both chambers of Congress, so it is unlikely to pass now that the Republicans control the House.

Gasland, which won five awards from as many film festivals in 2010, as well as an Oscar nomination, is available for viewing from Netflix, and at theaters and other venues around the country, and can be purchased for less than $15 on the internet. Its content is so threatening to the oil and gas industry that the industry hired a public relations firm to debunk much of the film’s claims through a website and press releases, but those efforts pale when compared to the footage of tap water being lit with a match as it comes straight out of the faucet.

The industry’s position seems to be “Don’t believe your lying eyes.”

2 Responses to Lamar W. Hankins : Natural Gas and the Perils of Fracking