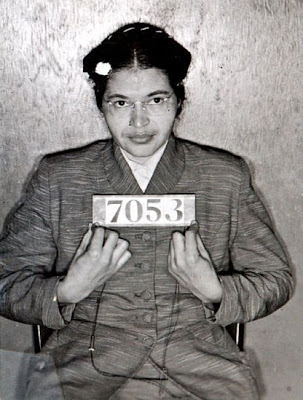 Rosa Parks had a life-long history of activism against injustice, but school children are seldom told the true story about her life of agitation and struggle against oppression.

I don’t like to read about Black history during February each year because most of what I find is so sanitized. Black history is full of the stuff of human history — courage, anger, intellect, rebellion, fear, intimidation, foolishness, agitation and, a hundred other descriptors. But what I hear less about than almost anything is agitation.

Dick Gregory used to say that an agitator is that thing in a washing machine that gets the dirt out. Others (notably Jim Hightower) have used that same idea to explain why agitators are needed.

The earliest use of that formulation that I have found is recounted by Mike Miller, a veteran of the Berkeley Free Speech Movement, SNCC, and the Industrial Areas Foundation (Saul Alinsky’s organization), in an article about working with SNCC in 1963 in Mississippi:

I went to a mass meeting in Ruleville — you all know that Ruleville was the home of Fannie Lou Hamer. There were maybe 20, 30 people, but we called that a mass meeting in those days. And at this mass meeting, an old Black man got up, and as he spoke he put an arm up like this, and he started moving it. And he said: “You know” — his voice was trembling — “they call you Freedom Riders outside agitators. I got an old style washing machine in my home. It has a thing at the top; it goes back and forth like this.” He pointed to his arm. He said: “You know what that thing is called? It’s called an agitator. You know what that agitator does? It gets the dirt out.”

But now we have a new book about Rosa Parks that sheds some needed light on the myth that she was just a poor seamstress whose feet were too tired to walk another step when the bus conductor in Montgomery ordered her to give up her seat to a white man.

Charles Blow reviews The Rebellious Life of Mrs. Rosa Parks in The New York Times. The book explains that Rosa Parks had grown up in a family that would not allow its members to be treated as second-class. Parks had been trained for community organization work (agitation) at the Highlander Folk School.

She had encouraged and helped to defend women who had been ordered to give up their bus seats to a white person. She was ready when the bus driver ordered her to do the same, and she refused to move, leading to her arrest and the subsequent Montgomery bus boycott that lasted over a year until the buses were desegregated. She had a life-long history of activism against injustice, but school children are seldom told the true story about her life of agitation and struggle against oppression.

If we go back to the beginning of American slavery, we find many similar stories among Blacks in North America — stories of rebellion, agitation, and often death. Africans did not go willingly into the slave ships after their capture and detention on the west coast of that continent. These Africans came mostly from the west coast and from two to three hundred miles inland from an area bordered by the Senegal River and what is now Angola.

They were from tropical rain forests and grasslands. They came from tribal backgrounds, as well as from city-states then found in the Niger Delta, and from large, complex kingdoms that had existed for several centuries in the Sudan, with whom Europeans traded. They spoke many different languages and had many different cultural traditions.

The Portuguese began the African slave trade to benefit Portugal about 50 years before slave ships headed for the North American continent. Rebellions on the slave ships led many ship owners to take out what historian Benjamin Quarles has called “revolt insurance.” Beginning in 1522, slave revolts occurred in the Caribbean from Hispaniola to Cuba, Puerto Rico, Martinique, Antigua, Barbados, Jamaica, St. Vincent, and the Virgin Islands, along with a famous one in Saint Dominique (which later became known as Haiti).

By the mid 1700s on the mainland, slaves could be found from Delaware to Texas. In the South, slave owners depended on militias to keep rebellions under control. Thom Hartmann recently explained how this worked :

In Georgia, for example, a generation before the American Revolution, laws were passed in 1755 and 1757 that required all plantation owners or their male white employees to be members of the Georgia Militia, and for those armed militia members to make monthly inspections of the quarters of all slaves in the state. The law defined which counties had which armed militias and even required armed militia members to keep a keen eye out for slaves who may be planning uprisings.

The same practices were followed elsewhere in the South, where slave patrols kept order among slaves to prevent rebellions and punish those thought to be planning to revolt. Still, slave revolts did occur. Perhaps the largest slave revolt in the continental U.S. was in 1811 near New Orleans. It took both the militias and the U.S. army to quell it.

The unsuccessful revolt planned by Denmark Vesey in Charleston, South Carolina, in 1822 was thwarted by the betrayal of some participants. Slave owners were so fearful that other slaves would learn of Vesey’s plan that a trial record of that history was destroyed so that it could not be seen by slaves or others sympathetic to their cause.

Many Americans have heard of Nat Turner’s rebellion in Virginia, which occurred nine years later, in which about 70 slaves escaped and rampaged from plantation to plantation, killing at least 55 people. Had their ammunition not run out, Turner and his group may have been successful in freeing many slaves, but realistically the odds were stacked against them.

Virginia had over 100,000 men in militias, heavily armed and outfitted, who stood ready to protect the financial interests of the slave owners. It is no wonder that more rebellions did not occur, but when they did, it was because someone was willing to be an agitator against an unjust and inhumane system.

Agitation and its companion — rebellion — also made itself known in efforts to escape slavery. Perhaps the most famous agitator for escape to freedom was Harriet Tubman, a Black woman born into slavery. She escaped from slavery when she was 19 and subsequently helped more than 300 other slaves escape.

She reportedly always carried a gun because she had no intention of ever being enslaved again or having the fugitives she helped enslaved. For Tubman, she would either be free or dead: “There was one of two things I had a right to, liberty or death; if I could not have one, I would have the other; for no man would take me alive.”

Another escaped slave who became one of the most famous Black people of his time, both before and after the Civil War, was Frederick Douglass, who was a lecturer, newspaper editor, and writer. Perhaps Douglass’s most famous words are these:

The whole history of the progress of human liberty shows that all concessions yet made to her august claims have been born of struggle… If there is not struggle, there is no progress. Those who profess to favor freedom and yet deprecate agitation, are men who want crops without plowing the ground. They want rain without the thunder and lightning. They want the ocean without the awful roar of its many waters. The struggle may be a moral one; or it may be a physical one; or it may be both moral and physical, but it must be a struggle. Power concedes nothing without a demand. It never did and it never will.

While I’ve barely scratched the surface of the Black agitators who helped move this country forward and helped it escape its disgusting past, we need always remember that progress does not come without the agitators. Especially during Black history month, we should remember this lesson, and teach our children, as well as the adults, about our agitators, especially our Black agitators.

We need to stop whitewashing these agitators, sentimentalizing and sanitizing what they did, and acknowledge that it was their agitation that made the difference in our struggle to achieve freedom, equality, and justice for all people — whether they are black, brown, yellow, white, or a blend of colors.