Lamar W. Hankins : Ted Poe is the Bully with the Booming Voice 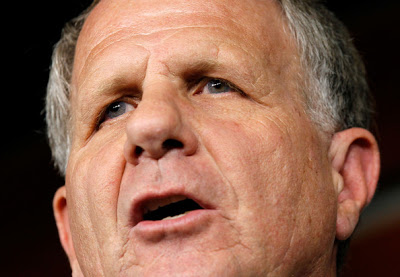 The recent article in The New York Times (picked up this past Sunday by the Austin American-Statesman) about Congressman Ted Poe’s inclination to have the first word most days in the U.S. Congress (by speaking on the record when hardly anyone is present other than a presiding official) was more filler than substance.

Poe is a Republican representative from the Houston-Beaumont-Port Arthur area, which includes the town where I grew up. I first encountered him while in my first year of law practice in 1977, when he was First Assistant District Attorney in the courtroom of the Honorable Allen Stilley.

The two were big buddies, having worked together in the District Attorney’s office before Stilley was elevated to the bench. If any defendants ever got justice in that courtroom, it was because of the good work of their defense attorneys and had nothing to do with Poe or Stilley’s living up to their oaths of offices — to their commitment to follow the laws and the constitution.

In fact, prosecutors face a primary and specific duty not to just convict offenders but to advance the cause of justice. Poe did not seem to care about justice, but he liked to humiliate those accused of crime and those convicted. His primary and specific commitments seemed to be to satisfy his anger, disregard normal human sensibilities, and mete out his own retribution.

Poe was often glib with a superficial charm, if innate meanness appeals to you. He struck me as the kind of lawyer who had a grandiose sense of himself (a common characteristic found in abundance in the profession). He seemed to have no shame when it came to the zeal with which he executed his job as prosecutor.

His callousness toward human frailty seemed to complement the tyrannical behavior he displayed toward defendants and anyone else who disagreed with him. The way he did his job seemed to provide him with great emotional satisfaction.

While waiting for a jury verdict one day, I witnessed Poe viciously attack a hapless defendant who wished to withdraw a guilty plea he had entered earlier. The defendant was on the witness stand. Poe was standing near him and shouting as loudly as he could in what the author of the New York Times article called his “booming Texas twang.”

Normally, having someone shouting with the roar of a freight train 12 inches from your face makes a person back away, but the defendant could not. He was confined to a chair in the witness box right next to Judge Stilley, who seemed to delight in the torture being meted out by his friend Poe.

The Code of Judicial Conduct provides that a judge “require order and decorum” in judicial proceedings. This scene was not in any way decorous. Those same canons require that a judge assure that lawyers in his courtroom be courteous. Poe was anything but courteous.

When the worthless appointed defense attorney for the man tried to speak up, Stilley ordered him to sit down and shut up, though the law requires that defense attorneys be given the right and the opportunity to participate meaningfully in the proceedings. The defense attorney would not cross Stilley, however, or he would never get another appointment in his court.

A meaningful way to participate in that situation would have been to lodge an appropriate objection to Poe’s conduct. The rules of evidence provide that the purpose of interrogation of a witness is to ascertain the truth. Both Poe and Stilley seemed to believe that water-boarding would have been effective, but they had to live with the extreme harassment being meted out by Poe.

Stilley failed entirely in his duty to protect the witness from either harassment or “undue embarrassment” in being treated like a witness in a television crime drama. It was the sort of situation that requires one to tighten one’s sphincter muscles to avoid having to change pants.

I learned later that Poe’s style was also Stilley’s style when Stilley became upset with me during a post-summation discussion about my client’s rights. I never raised my voice, but Stilley had the same vocal capacity and ferocious demeanor as Poe. Fortunately, I was at least six feet away from him when he began his shouting at me.

I learned early in my legal career from my friend, employer, and mentor, the late Stuart Kinard, that courtrooms were often hostile environments for defendants and defense attorneys, especially courtrooms in which the attorney had not previously appeared and was not known.

The judge, prosecutors, clerk, court reporter, and bailiffs usually work together day after day and become well-acquainted, if not friends, celebrating birthdays and other special occasions together. A defense attorney is often seen by them as an interloper, who seeks to free the guilty from government control, retribution, and punishment.

My view is that the job of a defense attorney is to hold the government accountable for its accusation against a citizen and for its own behavior.

Fortunately, for both defendants and defense attorneys, not all courtrooms are peopled with close-knit partisans. Many court staff members treat all participants in courtroom activities with respect and dignity. Such public servants deserve gratitude from all lawyers and from all citizens. Ted Poe does not fit into that category.

Politically, Poe believes that America should export our version of democracy much as an evangelical missionary tries to convert foreigners to Christianity, except that our country gets to use its military power to do so even if the costs mount into the trillions of dollars, mortgaging the futures of our children and grandchildren.

On immigration, Poe has no new ideas, only shop-worn pablum about protecting our borders and not rewarding violators of immigration law. He ignores the inherent discrimination that has existed for decades in a system that bases legal immigration on national origin quotas, politicizes refugee status, and splits up families — policies that contradict long-revered American values arising from notions of fairness and equity.

Poe supports the further development of nuclear energy even as we learn anew that it is an inherently unsafe technology, is financially irresponsible, threatens millions of lives with suffering and death, and has an unresolvable waste problem that could make human life on earth untenable.

On health care, Poe continues to promote the false claim that Medicare and other single-payer systems put the government in charge of a person’s health care decision-making.

In short, Poe is a mainstream Republican with nothing new or innovative to bring to the table, and he is quick to wrap himself in a religious cloth and make patriotic noises that may appeal to those whose primary source of information is Fox News.

The only plausible reason I can find for The New York Times to waste a reporter on a non-story about Ted Poe is that the Times has unfavorable ratings among Republicans, according to Pew Research surveys. But, if Poe’s only claim to fame is that he spoke first for more days than anyone else in the Congress, he will at least be doing less harm than he did as a prosecutor and judge.

5 Responses to Lamar W. Hankins : Ted Poe is the Bully with the Booming Voice