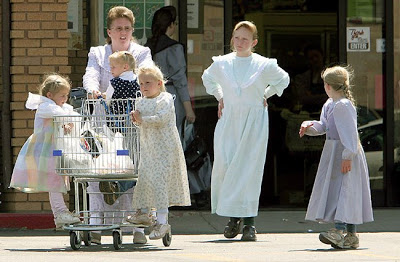 Religious freedom is not a cloak for abuse.
By Mariann Wizard / The Rag Blog / May 1, 2008

Just wondering; what are people thinking now about this stalwart group of religious freedom pioneers? Yesterday’s news that the little boys of the group seem to have had an inordinate number of broken bones, even for active little boys, also made me quite nauseated. Is this how abusers are created??

RELIGIOUS FREEDOM IS NOT A CLOAK FOR ABUSE, but it has been used as such, MAINLY BY RIGHT-WING NUT-CASES, since way before Hitler’s day.

The article further alleges that employees in the sect’s “defense” industries work for extremely long pay, and that much of the companies’ earnings go to the FLDS church each month. David Hamilton had wondered in The Rag Blog last week if part of the official investigation of the sect stemmed from antipathy to their communal lifestyle. I am reminded, Bro. David, that pre-capitalist economic systems involved a kind of primitive communism; only, as soon as any SURPLUS VALUE appeared, so did feudal serfdom. If those cats in El Dorado are practicing a “communal lifestyle”; I would suggest it may have more in common with the medieval kind than the Cuban model…

(“Sharing husbands,” indeed — NO, honey, that is NOT what they are doing; each man gets SEVERAL WIVES to wait on him hip and elbow, is how polygamy works. The women share housework and child rearing. [INCOMING JOKE WARNING — ALERT — JOKE WARNING — TAKE COVER!!] PolyANDRY, where each woman has several men to support her; now that is a system we should investigate!!)

The government’s tactics set a frightening precedent.
By Thorne Dreyer / The Rag Blog / May 1, 2008

One thing I’d say, Mariann, is that they’re trying to cover their asses.

Today’s Austin American-Statesman quoted Dr. David Teuscher, a Beaumont orthopedic surgeon, who said that 41 of 464 children with a fractured bone “could have been the elementary school around the corner.”

“It is really not an extremely high number,” he said, “We see children all the time who do crazy things and break their bones.”

The ranch’s on-site physician said, “Probably over 90 percent of the injuries are forearm fractures from ground-level or low-level falls.”

I don’t know who’s right, Mariann, but I do know that there have been a lot of unproven assertions here. And it would be hard to deny that, legally, this was a fishing expedition, based upon one, apparently bogus, phoned in accusation.

And that there is a concerted public relations effort to justify it after the fact.

There would still seem to be nothing that would have justified wholesale removal of children from the site and then from their mothers, something that is usually a move of last resort. Nothing that could not have been investigated on-site rather than turning first to the extreme tactic of mass removal.

Nobody’s calling these people a “stalwart group of religious pioneers.” At least no one I know. To me, this has to be a terrible, stifling way to live and to bring up children, and the idea of planned marriage, even when the bride is of age, is anathema to me.

But we cannot let our distaste for — or unproven accusations about — a certain subculture color our thinking, allow us to overlook a highly questionable assault on that subculture based on no evidence whatsoever — at least no evidence of which I am aware.

There certainly could have been better, legal, ways to deal with suspicions of abuse. The tactics they chose set a frightening precedent.

In another circumstance the same kind of tactics could have been — still could be –used against us or other unpopular groups whose lifestyles may differ from the norm, from the generally-accepted.

Insinuation is supposed to make you nauseated. This is an “if, then” proposition. If there was abuse then that would be terrible. The Austin American-Statesman wrote a very critical article (May 1st.) on CPS (Child Protective Services) commissioner Carey Cockerell’s canned speech to the state senate committee. Carey would not elaborate, senators were not allowed to ask questions, he would not talk to reporters.

Two doctors said that the number of broken bones is what one would expect out of a population of 400+, nothing unusual in itself. The bone doctors went on to explain what types of fractures are normal and certain age categories and others types which would unusual. Carey knows he is in trouble and so must keep up the drum beat of accusations. If one only reads the headline and the sub header then the article looks as if the abuse was fact but if one reads the entire article then Carey looks like he is grasping at straws.

One thing that probably cannot be denied is that prosecutors tend to maintain a rigidity about guilt in relationship to who they are prosecuting, regardless of exculpatory evidence. The broken bones might be a ridiculous example of supposed evidence of abuse.

It’s interesting to me how so many “authorities” jump onto the governmental bandwagon carrying condemnations of this or that, such as drug abuse or the Branch Davidians, while the history of governmental honesty, reasonableness, or fairness is lacking.

From my perspective, the govt is acting in the way we used to allege Communists did. I’ll be happy to change my mind with some evidence.

Previous discussion of the raid at Eldorado on The Rag Blog.