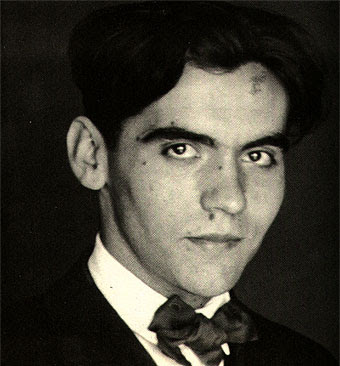 García Lorca’s grave has been found
just where it should be, of course, in Spain!
For people don’t just “disappear”,
not him, nor any of the tens of thousands of
poets, patriots, shopkeepers,
communists, loudmouths,
troublemakers who didn’t know
when to Shut Up
and who still, it seems,
have something to say.

His books were burned, then banned; what’s left to save?
Ah, but words don’t need books; they whisper on the waves!

Federico, hermano, ¿que dices?
“The bull does not know you, nor the fig tree,
nor the horses, nor the ants in your own house.
The child and the afternoon do not know you…
“Because you have died for ever…
like all the dead who are forgotten
in a heap of lifeless dogs.”
So he wrote, and so it was;
he was no wraith to walk in wishful dreams,
but a man full of bullets, covered with dirt.

As Whitman sang, of himself, of the body, of fragile Life,
of ordinary people and ordinary strife,
and, in the hearing, self-awareness rose –
so in García Lorca’s work this ferment grows:
“Nobody knows you. No. But I sing of you.”
Now the faggot poet’s bones are rising,
entwined with all the bones with which our “Spain” is paved,
for nothing hidden is ever truly lost,
and nothing true remains forever hidden,
nor will the people’s voice be silenced in the common grave.
García Lorca’s grave has been found
in Spain, where shells fell, in an uncivil hell,
and bells tolled, for the young and the bold –
in Spain, in this bloody, hallowed ground.

This entry was posted in Rag Bloggers and tagged Poetry, Revolution. Bookmark the permalink.