Mariann Wizard :
Brandon Darby – ‘To Live Outside the Law You Must Be Honest’ 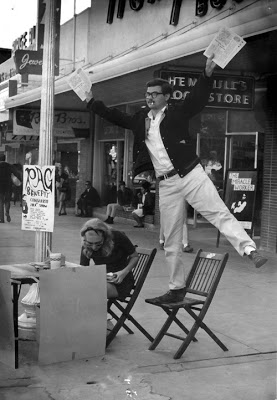 The news about confessed FBI informant Brandon Darby has stirred up a lot of old feelings in me that stem from personal and group experiences with people like Darby.

Robert Zani, convicted in 1981 of the 1967 murder of George John Vizard IV, my husband, was revealed much later (to the public) to have been a “narc” for the UT Kampus Kops, put in touch with the TX Department of Public Safety by the UT police chief. DPS officers openly attended Students for a Democratic Society (SDS) meetings at UT, as well as meetings of other anti-war and pro-civil rights organizations, but that certainly did not preclude their also placing spies among us, and we know that certain individuals in Austin reported to the Austin police department, and other agencies.

[For more about the death of George Vizard and the spying on Austin activists in the sixties, read The Spies of Texas by The Rag Blog’s Thorne Dreyer, published in the Nov. 17, 2006 issue of The Texas Observer.]

These disillusioning experiences were replicated, and in many cases intensified, nationally. The black liberation movement was targeted even more viciously than the student peace movement, and where black liberation and peace activism came together, infiltration and disruption were most extensive (witness J Edgar Hoover’s unrelenting attempts to “get the dirt” on Martin Luther King). People like Darby were often proponents of violence, urging inexperienced activists to irresponsible acts. The current Maryland State spy revelations are a chilling reminder of what we came, long after the fact, to know as COINTELPRO.

It angers me very much to see today’s idealistic young activists — some of whom I have come to know a little and hope to know for a long time due to their consistency, commitment, and dedication to the struggle — targeted by today’s government spies, and to know that innocent people will undoubtedly be harmed by government’s callous disregard of civil liberties.

The real question raised by Brandon Darby’s spying admission is, “How do you know when a person is honest?” The real answer is, “You can’t.” But enough questions had been raised about Darby, and some reports of his usual behavior are certainly suspicious enough, that in my opinion HE SHOULD HAVE BEEN ASKED POINT-BLANK by group leaders, collectively, if he was an informer, especially before they publicly defended him. This is a hard lesson for young activists, and no fun to learn, but a person can be betrayed by anyone. On the positive side, however, no one is ever betrayed by “just anyone,” but only by the most unscrupulous and morally degenerate of individuals (and yes, that makes it feel even more disgustingly gross to realize you were fooled; like being raped, being informed upon is an invasive and very personal experience!) Raising concerns and resolving them in a principled (HONEST), democratic manner is essential, no matter the topic. If something can’t be talked about and resolved in that way, there is more wrong in a group than the presence of an informer.

In addition, it’s important to recall that in the 60s and 70s, in the student milieu at any rate, our own eschewing of identifiable leaders and decision-making processes too often may have opened a door for the charismatic stranger who liked, e.g., to set fires. I don’t know that the new gen of activists has come up with any better model within their collectives; they don’t seem any more interested in acknowledging “leaders” than we were, but that means new activists also can’t identify who is really being truthful about group goals and methods. (That would make an interesting interview, or better yet, panel discussion.)

What makes a person willing to gain the confidence, friendship, and admiration of others, only to lead them into planning and/or committing bad acts and then “telling on them”?

If I thought Brandon Darby had the self-critical faculties necessary to provide a useful answer to that question, I might think an interview with him would be interesting. But in all likelihood, the self-justifications, excuses, counter-accusations and outright lies one would hear would effectively conceal whatever moral birth defect is at the root of his deceit. He is the jealous big brother tricking his younger siblings into being naughty in order to win Mama’s affection, perhaps; great fun when one is 10, but soon abandoned by a maturing human being. I was a big sister once, but now I believe that, if this life we are given has any purpose, it is to help one another.

Let us remember the stories of admirable men and women, and recall — perhaps with new insight after all these years? — the immortal words of Robert Zimmerman, “To live OUTSIDE THE LAW you must be HONEST. I know YOU ALWAYS SAY THAT YOU AGREE.”

8 Responses to Mariann Wizard :
Brandon Darby – ‘To Live Outside the Law You Must Be Honest’