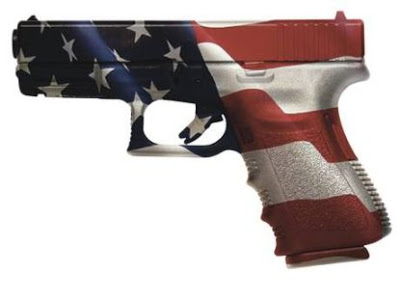 Image from WorldMeets.US.
Or Godot:
Guns? Don’t wait for Congress

With gun enthusiasts stockpiling weapons in light of impending federal regulations, what is a concerned citizen to do?

With 300 million guns out there, the reality is that neither the laws passed by governments nor the most elaborate fantasies of the survivalists — with police knocking down every door to unearth hidden arms stashes — will eliminate guns or gun violence.

Three hundred million. That’s the number of guns, from assault rifles to pistols, in the United States today, with the numbers rising each day as gun enthusiasts arm themselves against the local, state, or federal actions being pushed for by gun control advocates. That’s one gun for practically each and every American alive today — even though only a third of us own them.

President Obama has put forward a series of proposals aimed at curbing gun violence in the U.S., and urged Congress to reinstitute a ban on military-style assault weapons and to require universal background checks for gun purchasers. But with 300 million guns out there, the reality is that neither the laws passed by governments nor the most elaborate fantasies of the survivalists — with police knocking down every door to unearth hidden arms stashes — will eliminate guns or gun violence.

So, what to do, besides hope or despair? Despite the odds, quite a bit — with or without congressional or state action:

History is pretty clear: If we want change, we have to make it. From women’s suffrage to civil rights, from the establishment of the eight-hour day to pesticide control, our legislators have always responded to citizen action. As always, the future is in our hands.

This article was cross-posted to In These Times.

[An anti-war and civil rights organizer during the Vietnam War, Marilyn Katz helped organize security during the August 1968 protests at the Democratic National Convention. Katz has founded and led groups like the Chicago Women’s Union, Reproductive Rights National Network, and Chicago Women Organized for Reproductive Choice in the 1960s and 1970s, and Chicagoans Against War in Iraq in 2002. The founder and president of Chicago-based MK Communications, Katz can be contacted at mkatz@mkcpr.com. Read more articles by Marilyn Katz on The Rag Blog.