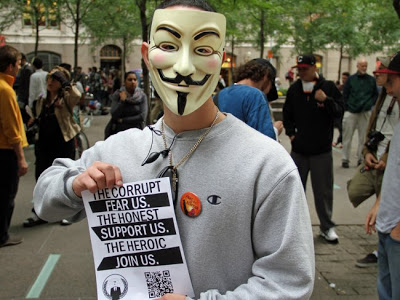 The emergence of a global youth counterculture should be seen as a powerful complement to a global movement for freedom, democracy, and economic justice.

First of all, in contrast to the last two protests I had participated in — a Wisconsin Solidarity rally at City Hall, and the Save Our Schools March on Washington — I saw few people my own age and no one I recognized at — least until the “Grade-In” started

When I arrived, at 11 a.m., most of the people in Liberty Plaza were the ones who had slept there overnight, and the vast majority were in their 20’s and 30’s — a half to a third my age. They were drumming, sweeping the sidewalk, talking to curious visitors — who were still few in number — eating or chilling with one another, and their relaxed demeanor blew me away given the tumultuous events of the day before when more than 700 protesters had been arrested by the NYPD after marching onto the Brooklyn Bridge.

But it was there, no doubt. And definitely made the discipline, determination, and camaraderie of the protesters that more impressive. But, as much as the age cohort and global character of the occupation seemed strange, it also seemed oddly familiar, though it took a while for that familiarity to sink in.

And I did the same for people in NYC. My apartment on West 99th Street was a crash pad for people from around the country who had come to New York for demonstrations, or for revolutionaries from other countries who had somehow gotten my name. I still remember making huge pots of chili for anyone who showed up — with Goya chili beans, canned tomatoes, chop mean, bay leaves, and chili powder. And it was not unusual for 20 or 30 to show up. 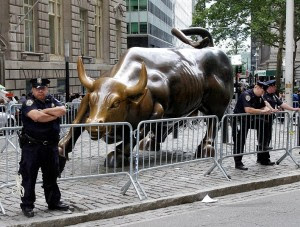 I had feared those days would never return — erased by decades of consumerism, materialism, and cheap electronic devices — but when I visited Liberty Plaza, I realized that the global economic crisis had recreated something which I often thought of as an artifact of my own nostalgia. Because right here in New York were hundreds of representatives of a whole generation of educated young people from around the world, numbering tens if not hundreds of millions of young people, who might never land in the secure professional jobs they had been promised or experience the cornucopia of material goods that came with them.

And the same is true in this era. The emergence of a global youth counterculture should be seen as a powerful complement to, if not an actual component of, a global movement for freedom, democracy, and economic justice.