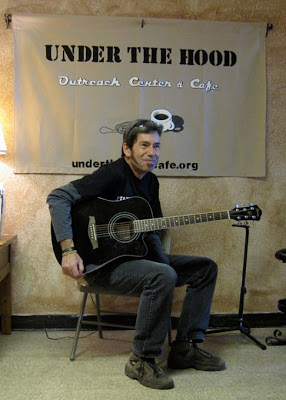 Nick Travis at the opening of the Under the Hood Café in Killeen, Texas. Photo by Carlos Lowry / The Rag Blog.
Memorial Day:
Texas peace movement
Looses two great friends

Memorial Day 2010 was a day to remember two friends who were mainstays of the Texas peace community. Nick Travis III, 55, passed away suddenly early Monday morning, May 24, in Austin. Lisa Morris, 28, passed away unexpectedly the next day in Copperas Cove.

Nick was a founding member of Instruments for Peace, an organizer along with Richard Bowden, of the annual Million Musicians March for Peace. He was a sustaining member of the Crawford Peace House and a Camp Casey regular. Nick and his wife, Melissa Garner, worked together to rebuild houses in New Orleans after Hurricane Katrina. They were also supporters of Under the Hood Café in Killeen, Texas, a pro-soldier, anti-war space for soldiers and their families, situated less than one mile from Fort Hood, the largest military base in the United States. 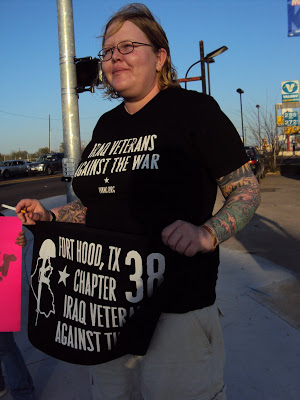 Lisa Morris, at the east gate of Fort Hood. Photo by Heidi Turpin / The Rag Blog.
Lisa Morris was an Under the Hood regular. A graduate of Rockford High School in Michigan, Lisa enlisted in the Army and was deployed to Iraq. She was present during the fierce fighting at Sadr City in 2004 when Tomas Young, subject of the documentary Body of War, was paralyzed. The fighting at Sadr City also took the life of Casey Sheehan, peace activist Cindy Sheehan’s son. Lisa was wounded later at Sadr City. She received a Purple Heart.

Lisa was part of the Under the Hood family. After her discharge, she stayed in the Killeen area, buying a home in Copperas Cove where she was known for her barbequing skills, and was beloved by neighborhood children and adored by all cats and dogs that crossed her path. Like many of the soldiers at Under the Hood, Lisa suffered with symptoms of post-traumatic stress disorder. Days before her death she had been hospitalized for an infection. She died in her sleep at home.

Nick was a musician for 30 years in the Austin area, a bassist performing with Natalie Zoe, The Vanguards, Guy Forsyth, the Paul LeMond Band, and Leeann Atherton. In recent years, he accompanied Miss Lavelle White, John Gaar and the Hopeful Soul, and Julieann Banks. Nick was also an actor, appearing in films and commercials and as a body double for Billy Bob Thornton in “Friday Night Lights.”

With his wide grin and big heart, Nick was always there for the benefits and the marches, getting the stage set up at Camp Casey or City Hall. He would serve as the emcee for the Million Musicians Marches and Instrument for Peace gatherings. More than 150 musicians and friends celebrated his life on Memorial Day at Leeann Atherton’s Barn Dance site in Austin. One peace activist there said, “I feel like one side of the tent has fallen.”

Lisa’s life had only begun to take an activist turn after Iraq. She was a member of Iraq Veterans Against the War. For her Under the Hood family, her loss was devastating. At the memorial for Lisa in Killeen, a neighbor sported a fresh tattoo — a fitting permanent tribute to Lisa whose arms were covered with ink. The tattoo shows “America’s High Five,” a map of Michigan in plaid, and carries these words below the map: “R.I.P Lisa Morris, June 9, 1981 – May 25, 2010.”

In the ninth year of the war in Afghanistan, there are now a thousand U.S. dead. There are uncounted civilian deaths. Drone attacks and ambushes on celebrations occasionally make the news. Injured soldiers like Lisa return from the continuous waves of deployment with physical and psychological wounds.

The peace community must honor the lives of Nick Travis III and Lisa Morris. Then, in their memories, renew every effort to stop these endless wars before they morph across more borders and more decades. As Joe Hill urged before his death, “Don’t mourn, organize.”

2 Responses to Memorial Day in Texas : Farewell to Nick Travis and Lisa Morris