Gerry, aka Mesmo, is a former Austin activist and musician who now lives in harmony with the Shamanic rhythms of the southwestern New Mexico desert. He shares bits and pieces of his wisdom with us on The Rag Blog.

It came to pass that I was pushed onto the drums by fate. A guru drum teacher entered my young life and explained it all to me.

So while I did not immediately embrace the idea of becoming a drummer, I was fascinated with rhythms and their associations. Playing them was a rush. I learned to play the 3-2 clave beat with one hand and the 2-3 clave beat with the other (not all that difficult). In this execution there is a cosmic connection. 2.0 against 1.67, the basics against infinity, the even against the odd. You can’t explain it but everyone can hear it. It’s not just the notes, it’s the way the silences between the notes are arranged as well. There is a push and a pull, a constant rotation. It is all rather mystical. And for pure fun it has few competitors amongst the rhythms. 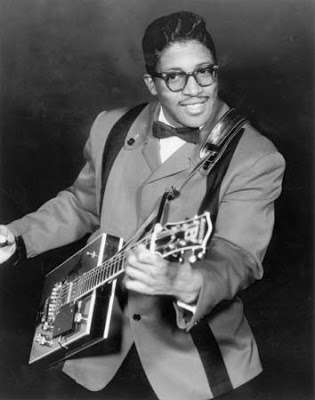 The late great Bo Diddley
Most recently a universal recognition of this phenomenon surfaced when the great entertainer, Bo Diddley died. “The Bo Diddley Beat” was again celebrated. All the headlines gave Mr. Diddley credit for “inventing” the beat. He did not. It is the 3-2 clave beat played on the electric guitar, while the drums rumble a loose 2-3 clave beat on the tom toms. The likely source of Mr. Diddley’s inspiration was the New Orleans school of whorehouse piano players, like Professor Longhair.

Longhair’s famous “Mardi Gras in New Orleans” released in the early ‘50’s can lay claim to many firsts. Some say it is the first rock and roll record. Some say it is still the best rock and roll record. It has the feel of the rumba, a blues rumba. When one listens carefully one hears the 3-2 clave beat played very prominently on a clave, out in the front of the mix, through the chorus, and then an answer comes rolling in from the saxophone section, playing the 2-3 clave beat in double time, two repetitions. And back and forth these patterns go, call and response. Longhair continued to play his gem throughout his career, often changing the arrangement, even changing the words into a kind of tourism promotion for the city. Some of his later arrangements feature horn sections and showy arrangements. But none of them is better than the original which has a feeling of the primitive that is mysterious and infectious.

According to fable these “professors” of the piano heard the beat in Caribbean music and translated it onto their instrument. The rumba was a big craze back in the ‘30’s and carved itself a niche in American popular music. The source was Havana, by way of Miami, the two being sister cities in those days with daily cruise ships running between them. If you study Latin dancing you will learn to use the clave beat in your basic steps. But the beat is also found in children’s games which are said to be traceable all the way back to Africa. You can still find it there today. To get the blues rumba feeling the piano players played the 2-3 clave in the bass with the left hand and the 3-2 above it with the right. One had a difficult time not dancing when the beat was being played. The 2-3 clave in the bass was modified slightly and became the famous early rock and roll bass line, the roll in rock and roll. This beat is prevalent in New Orleans music. You could say it’s the basis of New Orleans rhythm. It may well be much more than that. It may be the path to understanding the rhythms of the universe. 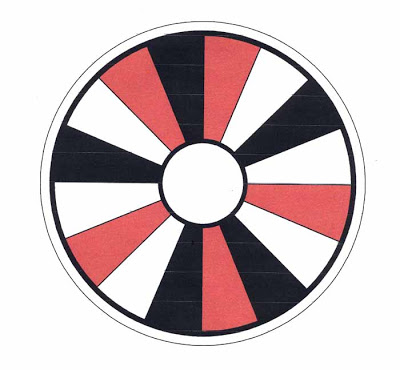 In trying to teach the beat to young wannabe hand drummers I had to find different ways to explain it. They heard the magic in the beat and could execute either of the elements quite competently but did not yet have the confidence to play both at once, kind of a duel between the left and right brains. I came up with the attached graphic illustration to show them pictorially how the beat looked. And what I came up with explained the beat to me with a new clarity.

Observe in the drawing that there are 16 equal subdivisions of the circle, 8 above the horizon line and 8 below. There 3 elements, the black, the white, and the red. Observe also that the black and red elements are identical, each with 5 parts. The white element has an extra slice, 6 parts.

If one notates the Bo Diddley interpretation of the beat, the 16 slices are 8th notes. So there would be two bars of 8th notes. The accents in the first bar are on 1, 4, and 7 (the black slices). The accents in the second bar are on 3 and 5. The response or red notes is the opposite, accents on the 3 and 5 in the first bar and on 1, 4, and 7 in the second.

Here’s the way to read the drawing: the beginning is the western horizon line. The black “note” there is 1. The remaining spaces in the upper hemisphere are numbered consecutively up to 8 moving clockwise. The first note of the second sequence of 8 is the red note just below the eastern horizon and the numbering is consecutive and clockwise. The white notes are rests or silences. Normally one would play the black notes with the right hand and the red notes with the left.

I invite one and all to give it a try.

In Africa the rhythms are tribal, they do not follow the national boundaries. I am not a student of African tribal cultures. I have not tried to pin the clave beats down to a certain place of origin beyond Cuba. The only culture I know a little about is the Madinke. I have studied the rhythms of this ancient culture. They are absolutely amazing. According to fable there are about 200 of them, each played for a specific purpose, a specific ceremony. Most are a combination of five rhythm lines, each drum and bell assigned an individual line. These musicians do not jam, they play the lines the same way, over and over, find the trance space and lie there. But you will not find the clave beats in these rhythms. I suspect they came from another culture to the south of the Madinkes, probably the Yoruban culture.

A widely accepted theory is that the original African clave beat was notated in 12/8 time. This beat was transformed to 4/4 time by the Cubans to make the music “more danceable”. In other words, it was westernized. So that is what we have today, the westernized clave, made for dancing. You can hear it in all the Cuban dances like the Son, Mambo, and Rumba. If you grew up in the past century listening to American pop music you probably have it in your soul.