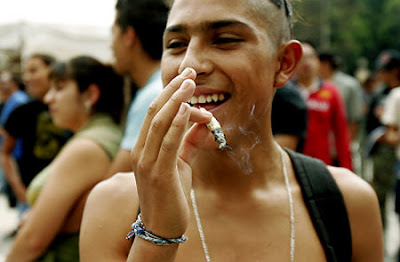 As poet Juan Pablo Garcia posited long ago in his 1985 Pacheco (marijuana user) Manifesto: ‘drugs don’t make us criminals but laws against drugs do.’

MEXICO CITY — Mexico has a 10,000 ton monkey on its back and its name is Washington D.C.

While U.S. drug enforcers gloat that 15-foot walls, high tech sensors, drones, blimps, spotter planes and rampant militarization have put a significant dent in the flow of cocaine across its porous southern border, drug use escalates exponentially south of that border. The reason: Colombian-Mexican cartels are now holding their loads longer in Mexico, waiting for the appropriate arrangements to be made to move the blow into El Norte.

Inevitably, the cocaine and to a lesser extent crystal meth and heroin (marijuana is readily available in the U.S., the world’s largest producer of the weed) leak into the Mexican street where fierce competition for sales and consumption is out of control. As a result, over 13,000 lives have been lost since President Felipe Calderon went to war with the drug cartels in December 2006, many of them in turf battles over trans-shipment routes and retail sales in Mexican cities.

Moreover, in the three years of Calderon’s drug war, which is being underwritten by $3,000,000,000 in Washington’s Merida Initiative funds, the number of “addicts” on this side of the border has risen by 460,000 and now totals almost a million, according to the estimates provided by the National Council on Addictions, and first-time users have jumped from 3.5 million to 4.5 million — some drug experts calculate that 10 million would be closer to the mark, depending on definitions of “user” and “addict.” One dangerous corollary: the Mexican prison system is bursting apart at the seams and lethal violence is on the rise.

Among long-time observers of Mexican drug wars, there are some, this writer included, who suspect that Washington’s militarization of the border and the consequent user boom here was a well-thought out strategy concocted by U.S. drug fighters to force its proxies in this distant neighbor nation to engage and confront the cartels. Viewed from this perspective, the thousands of dead on the ground here are simply cannon fodder in the U.S. War on Drugs initiated by Richard Nixon in 1969, officially declared by Ronald Reagan in 1985, and zealously executed by four U.S. presidents ever since. Barack Obama, a prohibitionist who likens Felipe Calderon to Al Capone’s nemesis Elliot Ness, is only the latest puppet-master in this grotesque dance of death. 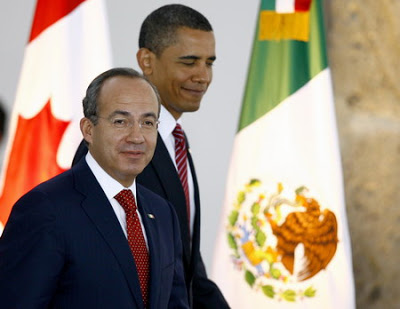 Partners in the Drug War: Presidents Calderon and Obama.
With jails exploding — prison riots are reported at least once a week — the Calderon administration has moved to tamp down dangerous overcrowding by “decriminalizing” the possession of small quantities of illicit drugs. This past August 21st, the Mexican president signed off on legislation that gives users and “addicts” (as health officers prefer to lump them) the option of treatment or prison if arrested with small amounts of drugs for personal use — two grams of marijuana (about four skinny joints), a half gram of cocaine, 40 milligrams of meth amphetamines, and 10 milligrams of heroin. Instead of immediate imprisonment, the drugs will be confiscated and the user/addict booked and fingerprinted and their biometrics recorded in a national registry of “addicts.”

Those pulled in are then released with the obligation of enrollment in government treatment programs that are still not operational. If the user/addict fails to show up for treatment or is arrested a third time, prison time is prescribed.

Those nabbed with larger amounts, calculated at a thousand times the minimum quantities, are automatically assigned to terminally overcrowded state prisons as “traffickers” — “traffickers” arrested with any amount over the higher quantities are sent to maximum security federal penitentiaries as kingpins.

There is no middle ground in this schema notes science writer Javier Flores in the national daily La Jornada: one is either a user/addict or a narcotraficante.

The Mexican congress passed similar legislation in 2006 during the waning days of Vicente Fox’s presidency but when the measure hit his desk, the red telephone rang and George W. Bush was on the line threatening grave repercussions if Fox did not veto the decrim bill – which, of course, he did.

What has decrim meant on the streets of Mexico City? A few weeks ago, my friend Xochi (not her real name), a street dealer who makes house calls, and this writer visited a sick friend — Xochi brought along a bag of medicinal marijuana and I some cannabis cookies. The conversation turned to Calderon’s recently promulgated decrim and we consulted our offerings to determine if we were users, “addicts,” or kingpins. It goes without saying that we were criminally over the limit but fortunately the local gendarmes did not bust down the door.

According to Xochi, decrim is turning into a bonanza for Mexico City cops who have taken to carrying scales to weigh confiscated drugs and shaking down those “criminals” who exceed the decreed limits. Shaking down small-time users and dealers is nothing new in this the most corrupt, crime-ridden, and conflictive city in the western hemisphere. Indeed, crooked cops have been planting drugs on unwary citizens as long as cops have patrolled these mean streets. Long before decrim was a gleam in Calderon’s eye, those “found” with drugs in their possession did not immediately go straight to jail if they could come up with the “mordida” (literally “bite” or bribe) to get the cops off their backs.

As poet Juan Pablo Garcia posited long ago in his 1985 Pacheco (marijuana user) Manifesto: “drugs don’t make us criminals but laws against drugs do.”

Overwhelmed by millions of users, addicts, narcotraffickers, and kingpins, Calderon has turned to God for relief. Young people who use drugs do not have God in their (miserable) lives, he explained to Catholic bishops attending a family crisis conference last month, citing the recent death of pop idol Michael Jackson as an example — although there is no evidence that Jacko did not believe in God or was even a user/addict (the official autopsy concluded that Michael was overdosed by a doctor with a lethal anesthetic.)

The president’s hypothesis was promptly shot down on editorial and op-ed pages all over the country. Aside from increased availability in Mexico thanks to Washington’s worldwide crusade against demon drugs, critics pinned the dramatic increase in users-“addicts” on a battered economy in which more than 2,000,000 workers have lost their jobs in the past year as a more pertinent explanation of the boom. With nearly a million young people entering the job market each year, Calderon, who once billed himself as “the president of employment,” has floundered badly as a job creator. On the other hand, drug cropping and retail street dealing (“narcominudeo“) provide gainful employment for millions of kids without jobs. 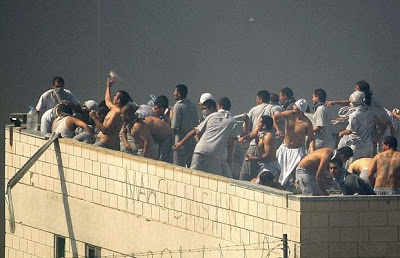 Prison riots are reported at least once a week. This one, in Tijuana on Sept. 18, 2009, left 19 killed and a dozen wounded.
In fact, there are multiple indicators that drug users, dealers, “addicts”, and kingpins do have God in their (miserable) lives. “We, the Marijuanos, are Guadalupanos (devotees of the Virgin of Guadalupe) not goddamn communist whores,” Juan Pablo Garcia wrote in his Pacheco Manifesto. Narcotraficantes are celebrated for their devotion to their faith, buying Masses, hiring priests for baptisms and weddings and funerals and even building churches. Drug money — “narco-limosnas” (drug alms) are a significant component of Church finances, concedes Bishop Carlos Aguiar Retes, president of the Mexican Bishops Conference (CEM.) For the Catholic Church, explains Aguascalientes bishop Ramon Godinez, turning illegitimate gains into good works is perfectly pardonable.

Although cocaine and meth (Mexico does not produce much heroin) are considered to be killer drugs, reefer madness is alive and kicking south of the border. Mexicans consume 357 tons of drugs annually, advances Secretary of Public Security Genero Garcia Luna, of which marijuana accounts for 343. Marijuana is considered a dangerous drug by crusaders like Garcia Luna and his boss Calderon and those who use it are considered “addicts” in need of “treatment” — actually Mexican marijuana is typically punchless and low in THC content when compared to hot house-grown, high-potency strains in the U.S. where cannabis is considered to be medicinal in some states. What makes treatment propositions even more absurd is that there are no treatment centers to accommodate newly decriminalized pot smokers.

For hard-core addicts desperate to get off the crack pipe or the needle, public detox clinics have been stripped back to the bone. While wealthy user/”addicts” sign themselves into deluxe spas to detox, the poor have few options. Like every other public service the Calderon government is charged with providing, drug treatment has been privatized under the prevailing neoliberal economic model.

Evangelical churches run treatment programs in many working class colonies that force addicts to go cold turkey. Corporal punishment and the Word of God are means of coercion to get young people off drugs.

The drug gangs themselves run their own treatment programs for street dealers that get hooked on the goods they push according to one Ciudad Juarez pistolero Julio Cesar Aleman, a member of a hit squad known as “The Artists of Assassination,” enforcers for the Sinaloa cartel, who are charged by federal authorities with a total of 45 killings — 28 of them at two treatment homes in that Gran Guignol border city. La Linea (a rival drug gang) gets them off drugs, fattens them up, and sends them back out on the street to deal,” he explained to police agents to justify the homicidal assaults.

Decriminalizing drugs in a country through which 80% of the U.S. cocaine supply passes (Drug Enforcement Administration estimates) changes little in Mexico so long as it borders the biggest drug market on the planet. Even as decrim takes root north of the border, more than 800,000 Americans were arrested for possession of marijuana in 2008 according to Ethan Nadelman of the Drug Policy Institute. Legalization and not decrim is the only answer.

Drug reform is catching on in Latin America. In addition to Mexico’s feeble and misplaced efforts at providing alternatives to incarceration, Argentina courts recently ruled that personal possession of marijuana is not criminal. In Colombia, decriminalization of small amounts of cocaine has been the law since the 1990s. In Bolivia, President Evo Morales champions the medicinal properties of the coca leaf, the source of powdered cocaine, and endorses the industrialization of the plant. At a 2008 drug policy conference in Brazil, former presidents Fernando Henrique Cardoso, Cesar Gaviria of Colombia, and Ernesto Zedillo, the squarest Mexican president to ever administrate the affairs of this country, declared that the prohibitionist approach had failed.

Or decriminalize it either.