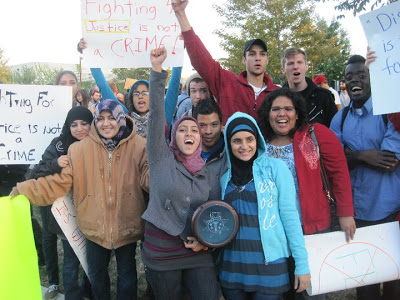 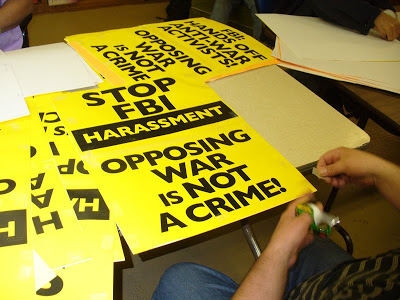 In late September the FBI carried out a series of raids of homes and anti-war offices of public activists in Minneapolis and Chicago. Following the raids the Obama Justice Department subpoenaed 14 activists to a grand jury in Chicago and also subpoenaed the files of several anti-war and community organizations.

In carrying out these repressive actions, the Justice department was taking its lead from the Supreme Court’s 6-3 opinion last June in Holder v. the Humanitarian Law Project which decided that non-violent First Amendment speech and advocacy “coordinated with” or “under the direction of” a foreign group listed by the Secretary of State as “terrorist” was a crime.

The search warrants and grand jury subpoenas make it quite clear that the federal prosecutors are intent on accusing public nonviolent political organizers, many affiliated with Freedom Road Socialist Organization (FRSO), of providing “material support,” through their public advocacy, for the Popular Front for the Liberation of Palestine (PFLP) and the Revolutionary Armed Forces of Colombia (FARC).

The Secretary of State has determined that both the PLFP and the FARC “threaten U.S. national security, foreign policy or economic interests,” a finding not reviewable by the Courts, and listed both groups as foreign terrorist organizations (FTO).

In the Humanitarian Law Project case, human rights workers wanted to teach members of the Kurdistan PKK, which seeks an independent Kurdish state, and the Liberation Tigers of Tamil Eelam (LTTE), which sought an independent state in Sri Lanka, how to use humanitarian and international law to peacefully resolve disputes, and to obtain relief from the United Nations and other international bodies for human rights abuses by the governments of Turkey and Sri Lanka. Both organizations were designated as FTOs by the Secretary of State in a closed hearing, in which the evidence is heard secretly.

Despite the non-violent, peacemaking goal of this speech and training, the majority of the Supreme Court nonetheless interpreted the law to make such conduct a crime. Finding a whole new exception to the First Amendment, the Court decided that any support, even if it involves nonviolent efforts towards peace, is illegal under the law since it “frees up other resources within the organization that may be put to violent ends,” and also helps lend “legitimacy” to foreign terrorist groups.

Writing for the majority, Chief Justice Roberts, despite the lack of any evidence, further opined that the FTO could use the human rights law to “intimidate, harass or destruct” its adversaries, and that even peace talks themselves could be used as a cover to re-arm for further attacks. Thus, the Court’s opinion criminalizes efforts by independent groups to work for peace if they in any way cooperate or coordinate with designated FTOs.

The Court distinguishes what it refers to as “independent advocacy” which it finds is not prohibited by the statute, from “advocacy performed in coordination with, or at the direction of, a foreign terrorist organization,” which is for the first time found to be a crime under the statute. The exact line as to where independent advocacy becomes impermissible coordination is left open and vague.

Seizing on this overbroad interpretation of “material support,” the U.S. government is now moving against political groups and activists who are clearly exercising fundamental First Amendment rights in vocally opposing the government’s branding of foreign liberation movements as terrorist and supporting their struggles against U.S. backed repressive regimes and illegal occupations.

Under this new definition of “material support,” the recent efforts of President Jimmy Carter to monitor the elections in Lebanon — which was coordinating with the political parties there including a designated FTO, Hezbollah — could well be prosecuted as a crime. Similarly, the publication of op-ed articles by FTO spokesmen from Hamas or other designated groups by The New York Times or Washington Post, or the filing by human rights attorneys of amicus briefs arguing against a group’s terrorist designation or the statute itself could also now be prosecuted.

Of course, the first targets of this draconian expansion of the material support law will not be a former president or the establishment media, but members of a Marxist organization and vocal opponents of the governments of Israel and Colombia and the U.S. policies supporting those repressive governments.

President Obama in his foreword to the recent autobiography of Nelson Mandela, Conversations with Myself, wrote that “Mandela’s sacrifice was so great that it called upon people everywhere to do what they could on behalf of human progress. [and] . . . [t]he the first time I became politically active was during my college years, when I joined a campaign on behalf of divestment, and the effort to end apartheid in South Africa.”

At the time of Mr. Obama’s First Amendment advocacy, Mr. Mandela and his organization the African National Congress (ANC) were denounced as terrorist by the U.S. government. The “material support” law, if in effect back then, would have opened Mr. Obama up to potential criminal prosecution.

It is ironic, and the height of hypocrisy, that this same man who speaks with such reverence for Mr. Mandela and recalls his own support for the struggle against apartheid, now allows the Justice Department under his command to criminalize similar First Amendment advocacy against Israeli apartheid and other repressive foreign governments.

[Michael Deutsch is a lawyer with the People’s Law Office in Chicago. For the past 40 years he has represented political activists and victims of government repression Among his clients have been the Attica Prisoners in the 1971 uprising, Puerto Rican independence fighters, members of the Black Liberation movement, grand jury resisters, and Palestinians falsely accused of terrorism.]