Michael Simmons : I Was a Texas Jewboy! 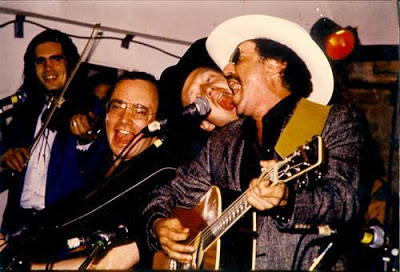 The Kinkster blew my still-growing mind and helped make me the disrespectful malcontent I am today.

My first live sighting of Richard “Kinky” “Big Dick” Friedman was at Max’s Kansas City in New York in 1973. He was headlining Upstairs at Max’s with his band the Texas Jewboys and I was an 18-year old hometown Jewish country singer who revered both Hank Williams and Lenny Bruce. The Kinkster blew my still-growing mind and helped make me the disrespectful malcontent I am today.

Kinky practiced the freest of free speech, the kind guaranteed in the Constitution but relatively unused, particularly here in the 21st Century. He’s always insisted on telling the truth no matter how many people he pisses off.

Kinky’s songs satirized racism (“We Reserve The Right To Refuse Service To You”), serial-killing Boy Scout/Marines (“The Ballad Of Charles Whitman”), rednecks (“Asshole From El Paso”), religion (“They Ain’t Makin’ Jews Like Jesus Anymore”), and male chauvinism (“Get Your Biscuits In The Ovens And Your Buns In The Bed”). That proto-politically correct feminists failed to see the wit in the latter wasn’t Kinky’s fault and there were some ugly incidents including the storming of the stage in Buffalo, New York, where band and leader fled for their lives.

But Kink could also do poignant like nobody’s bidness in “Sold American,” ostensibly about a washed-up country star, but really about greed-American style, and “Ride ‘Em Jewboy,” a heartbreaking meditation on the Holocaust from his viewpoint as a Hebe from Kerrville, Texas. There’s a damn good reason the Kinkster is one of Bob Dylan’s favorite songwriters.

His tagline onstage was “Thank you for being an American!” Damn, he made this little hippie patriotic! I knew that night at Max’s that one of my goals in life was to be a Texas Jewboy. Me and my band Slewfoot were soon a popular act on the Northeastern country circuit, a crew of Yankee headnecks adept at Western Swing with a cannabinoided baditude.

In 1977 Slewfoot open-nighted a new honky-tonk on Fifth Avenue called the Lone Star Café where Kinky began regularly gigging, eventually settling in NYC. We were introduced and broke bread with a spoonful of irving. (Irving Berlin wrote “White Christmas” …you do the math.) The Texas Jewboy invited me to sit in and I simply never left the stage. It wasn’t a stretch — I knew all the songs!

I played rhythm and, with mandolinist Jim Rider, sidekicked with the Kinkster, singing harmonies and staging semi-elaborate dance routines. Although technically we weren’t the original Jewboys — names like the Entire Polish Army and the Exxon Bros. came and went — people still referred to us as such, satisfying at least one of my life’s goals. (I’ve yet to do the hucklebuck with Catherine Deneuve.)

Kinky was (and remains) a celebrity magnet. He’s got an authentic and peculiar genius that can’t be duplicated and the talented and famous like to get close. In the Lone Star days, a partial list included my heroes Mike Bloomfield and Abbie Hoffman, as well as John Belushi, Hunter Thompson, Keith Richards, The Band, Dr. John, Robin Williams, of course Dylan, and a lot of others who are dead or ought to be.

There were fringe bohemians like JFK impersonator Vaughn Meader, who’d lost his job on November 22, 1963. I also met my best friend, author Larry “Ratso” Sloman, in that menagerie. And there were many women, so many that Kinky and I had a running joke that involved him inadvertently acting as my pimp.

We did some strange gigs, including a bar mitzvah in New Jersey that was more like a coronation. And in 1985, Kinky, Ratso, and I flew to Toronto for a three-night engagement, the surreal highlight of which was meeting Grand Ole Opry star Little Jimmy Dickens in full-dress Nudie Suit at Pearson International Airport.

But by the mid-‘80s, Kinky was burning out on rock ‘n’ roll and irving, not necessarily in that order. “I need a lifestyle that doesn’t require my presence,” he told me. He loved Agatha Christie and began scribing mystery novels with himself as the Sherlock, Ratso as the Watson, and our friends as other characters, real names and all.

I’m a hard-drinkin’, Hank-singin’ murder suspect in A Case Of Lone Star and am described as engaging in all kinds of debasement. (It may have been what did my late mother in when she read it.) The books became best-sellers and Kinky became hugely famous in your household definition and Bill Clinton’s favorite author. Some were appalled when he likewise palled around with George W. Bush, but Kinky’s World is a big one, as anyone who followed his noble — albeit failed — 2006 run for Governor of Texas knows.

No matter how many books he autographs, the Kinkster has always identified with outsiders – particularly musicians. You can take the Texas Jewboy out of music, but you cannot take the melody out of Kinky. He and guitar are currently out on his Bi-Polar Tour — 28 shows in 27 days. “It’s a much higher calling being a musician than being a politician,” he says.

It’s been (almost) 40 years since that night at Max’s Kansas City and there are few public figures who’ve consistently entertained me and even fewer friends who are as loyal as Kinky Friedman. Thank you, Kinky, for being an American.

A version of this article appeared in the July 29, 2010, issue of the LA Weekly.

[As leader of the band Slewfoot, Michael Simmons was dubbed “The Father Of Country Punk” by Creem magazine in the 1970s. He was an editor at the National Lampoon in the ’80s where he wrote the popular column “Drinking Tips And Other War Stories.” He won a Los Angeles Press Club Award in the ’90s for investigative journalism and has written for MOJO, LA Weekly, Rolling Stone, Penthouse, High Times, the Los Angeles Times, The New York Times, CounterPunch, and The Progressive. Currently wrapping a solo album, Michael can be reached at guydebord@sbcglobal.net.]