Musings on Barkley : Death, Society and an English Black Lab 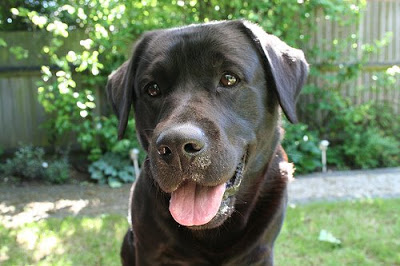 Not Barkley, but close enough. Photo by Will, UK.

Rag Blog compadre and correspondent Larry Ray passed along this wonderful essay that came to him from a friend’s friend, a retired radiologist. Surely we can take a pause from all the dark news for a finely-honed shot of sweet wisdom.

About the author, Larry Ray comments: “The doctor’s ability to see things in X-rays most of us cannot see, clearly extends to his vision into the soul of man and the world around us. His dog, Barkley, helps tell this cautionary tale of life’s mysteries and the foibles of man. It is appropriate to these times.”

My dog Barkley is an English black lab who is now turning six. He has short legs and a sweet disposition, especially gentle with children – although very aggressive about his food. When I walk with him on our Florida beach he makes instant friends, with his wagging tail, uplifted nose, and expectant eyes. He unfortunately has occasional petit mal seizures, but controlled on daily medication. He was found on the internet by my daughter Celia, having been transferred from somewhere in Alabama to a local adoption agency. If not adopted by us, he might have been put to death. Not too long ago I told someone whom I know very well that I thought Barkley is smart, even smarter than I, possibly also smarter than they. I don’t think they liked the pronouncement very much. What I meant to express pertains to the basic human conundrum.

Ernest Becker, in his classic book on the meaning of death, suggests that the fear of death – human anxiety hovering around the certain knowledge of one’s own eventual death – is the root of human misery. Most people actually do not gain this knowledge in any profound way until around age ten. When they do, they quickly forget it. But repressed knowledge does not vanish. The happy-go-lucky extrovert, the overly serious introvert, act out their individual personas in response to this repression. Becker also suggests that death anxiety is behind most religion, a cause of wars, the source of much human misunderstanding and conflict, and the fundamental cause of much social injustice. In addition, it may have something to do with alcoholism, compulsive gambling, and marital affairs.

If the above ideas about death repression sound like psychobabble to you, perhaps you nonetheless love dogs, are interested in their mental states, and will probably agree that repression is a conundrum spared Barkley. Ignorance, for dogs, may be bliss but for human society it can lead to enormous suffering. For a mountain gorilla living wild on a forested crater in Rawanda (perhaps above a vast field of human genocide below), and also for domesticated Barkley, there is no future time. They live and survive, find food and reproduce — in an eternal present – a sort of perilous earthly paradise. Perhaps we humans somehow fundamentally, but unconsciously, envy them. Otherwise, why all the religious fantasies (particularly Christian and Muslim) invoking images of heaven and eternal life after death?

This writing is supposed to be a rumination on the New Year, involving resolutions, new insights, renewed hope, and optimism. I have made some resolutions, but the hope and optimism come harder. One insight, gleaned from Jeffers, is that it is better to tell the truth. Nietzsche said that the poets lie too much. It is best not to lie to yourself. So I will confess: I fear that I may be becoming a misanthrope. I’ll blame it all on my reading of Thoreau. Beethoven said that he liked a tree better than a man. Why so? Reinhold Niebhur reminds me not to get too optimistic.

Barack Obama has mercifully been elected President, but remember, societies essentially make no moral progress. Obama heads one branch of a huge bureaucratic institution with lots of inertia. Tactical changes will be easier than strategic changes. Individuals can have moral epiphanies, can gain knowledge from history, can learn to have empathy and feel solidarity with others — but societies never do. Individuals can even learn to love the earth, our only home in the universe and the planet whose biosphere is the foundation and source of all life. Societies, however, and society’s cultural institutions, are incapable of love. Do not expect it. Society has made no moral progress since Socrates. I wonder about Ashoka in India. Does anyone know if he really did abrogate violence?

Before this year deserts me, I have one story to tell. It is about my brother-in-law Marty who died in December. One year ago Marty was in his usual state of fairly poor health. I must tell you that at one time Marty was the president of a major construction firm, but financial difficulties arose in hard times, and Marty lost the company. Although vastly overqualified, Marty later took a job as a grocery store clerk, sacking groceries, I imagine, mainly to retain health benefits. He needed that insurance because he had developed hypertension, and subsequently suffered bouts of transient cerebral ischemia. Then, about fifteen years ago Marty had a stroke which left him with some mild speech impediment.

All of this, naturally, was difficult for Marty, as well as his family. Marty had lost physical prowess, money, prestige, and all the sense of security he had growing up and as a father and community leader. Physical loss in abundance, but Marty never lost his great spirit. Instead of giving up, Marty decided to indulge his lifelong ambition to become a stand-up comedian. Growing up Marty was always known for his unusual deadpan humor. In high school he entertained friends by impersonations and his original but understated antics. At Vanderbilt he was elected to the student council as Emahtram Srednas, his real name, Marthame Sanders, spelled backward. When he started performing in public he often appeared at the Punch Line in Atlanta. I remember a particular routine in which he walked slowly onto the stage and announced, in his usual slow somewhat slurred speech, that he was depressed. He then admitted that he had suffered a stroke, but, fortunately, as a stand-up comedian, it had only affected his speech.

The great thing about Marty’s humor was that it was always turned upon himself. He told often embarrassing stories about himself, from his ordinary experience. He was never sarcastic, or even very ironic. He never made fun of others. His was an imminently human act. Marty managed to sublimate his own suffering into humor, and I am certain this helped others. Marty had, and communicated, great empathy. About six weeks before his death Marty fell, hitting his head, causing a small intra-cranial bleed, which soon cleared completely on MRI. Later he suffered pulmonary embolism, but survived that acute episode, even with minimal treatment.

The family wished for no heroic treatment to extend a deteriorating quality of life, so Marty was sparred IV’s and feeding tubes, but Marty never gave up. Until the very end, he tried to be cheerful, even joke, to comply with his family’s wishes, and always be a good father. Marty died after a short stay in hospice. I still do not understand the reasons why Marty left us so soon. I will always admire his gentle and loving spirit, and I feel some guilt about not spending more time in his presence in recent years. The loss is mine. Marty’s death, although tragic, as all death seems at the time, helps me to realize how sweet and wonderful life is, if we can but appreciate it. Even with all our human problems, including pain, life itself is our greatest gift. How dare I be in a New Year’s funk — as long as I am alive and have my mind and health!

Barkley lies beside me, snuggling. He is happy, and dumb. He descended from a wolf, and did not inherit the large brain and opposable thumbs that, for us humans, make symbolizing culture possible. But he is spared the repression of the knowledge of death. He experiences life directly, without cultural filtering. And what have we humans done with our culture that is so wonderful? Society’s endless wars, coercive violence, overpopulation of the globe and condemnation of at least a third of humans to abject poverty, pollution and destruction of the biosphere, etc. – on and on. Yes, I know that we have developed the scientific method, and that is a great achievement. But we have also developed some bad technology, like nuclear weapons. Sweet Barkley, or the wild deer in the forest who survives, without complaining, with a sort of wild courage I could never muster, will never practice war, which is murder writ large – although they will suffer and go extinct because of our wars and usurpation of their habitat.

Our animal cousins in their natural habitat never overpopulate or despoil the planet. Barkley will live his life and die, just as I, and we will go back into the atmosphere and earth from whence we came. This, ultimately, is not a tragedy. It is the sustainable way of nature. But we humans have a special obligation to which we are only beginning to awake, which is: Preserve the biosphere which supports us, and all life. Up until now we have only been taking and diminishing. The empathy that we naturally feel for our children and grandchildren must come to extend forward to unborn generations. Otherwise, there will be no future anyone would want to experience.

Today we have the technical means to enable all humans to live a happy and productive life, to fulfill the potential of our big brains and our language. But we must learn to live as enlightened individuals within societies that care about social justice. We may have to give up on nation states that applaud when the patriot proclaims, My Country Right or Wrong. If you make war, if you destroy the biosphere, if you practice coercive violence to maintain your social privilege – you are always wrong.. We can learn to love ourselves, and our neighbors as ourselves, but we will do it as individuals living in smaller groups within just societies. We can even learn to love the earth. Yes, we can.

Someday, perhaps, I might even become as smart as my dog Barkley.

This entry was posted in Rag Bloggers and tagged Dogs, Philosophy. Bookmark the permalink.

4 Responses to Musings on Barkley : Death, Society and an English Black Lab