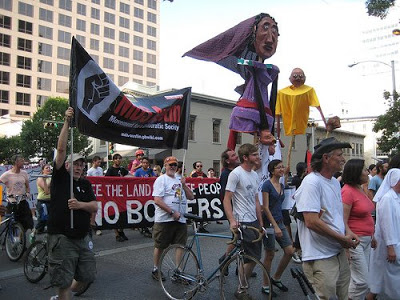 MDS/Austin and the Rhizome Collective (with papier mache figures) were among dozens of groups participating in Austin May Day activities. Photo by Alice Embree / The Rag Blog.
Hundreds march in Austin for Immigrants’ Rights
By Thorne Dreyer / The Rag Blog / May 2, 2008

An ethnically diverse crowd that grew to about 700 gathered at Austin City Hall for a rally at 4:30 p.m., then marched to the Travis County Jail to protest increased county cooperation with immigration officials. (Immigration and Custom Enforcement [ICE] now has its own office at the county jail.)

They marched past the Governor’s Mansion – Gov. Rick Perry is a vocal advocate of building border walls – and finally to the Texas state capitol building for speechs and musical entertainment.

Organized by the Austin Immigrants’ Rights Coalition (AIRC), the event was considered a success though there were significantly fewer participants than at a similar demonstration in 2007 when several thousand marchers hit the Austin streets. This would appear to mirror a national trend.

Caroline Keating-Guerra of the AIRC, said she was happy with the size of the crowd. “I don’t think it’s any indication that the movement has died down,”

“Our local issue here is the way in which federal immigration policies have been affecting us at a local level, with immigration and customs enforcement in our jails,” Guerra told an Austin radio station.

Leslie Cunningham, of coalition member Texas Labor Against the War, cited as a cause for the smaller turnout the increasingly negative climate for immigrants in this country, and a greater fear of deportation.

Speakers at the rally included Sister Guadalupe of Cristo Rey Church in East Austin, Iraq veteran Hart Viges, high school student Madeleine Santibanez who talked about the recent deportation of her mother, and Maria Martinez of the Workers Defense Project/Proyecto Defensa Laboral, a local Austin group that fights for the rights of immigrant workers.

There were rallies for immigrants throughout the United States Thursday. According to the Chicago Tribune, “Turnout has fallen sharply since the first nationwide rallies in 2006, when more than 1 million people — at least 400,000 in Chicago alone — clogged streets and brought downtown traffic to a standstill. About 15,000 people rallied in Chicago in one of the largest demonstrations of the day.”

Meanwhile, hundreds of thousands of workers across the world took part in celebrations and protests to mark International Workers’ Day on Thursday.