Nobel Screams : ‘Out of Afghanistan’ 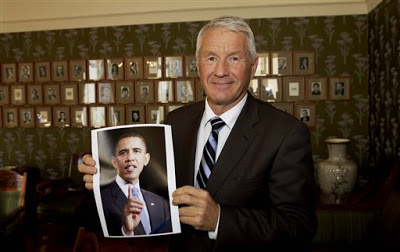 Nobel Chairman Thorbjoern Jagland. Obama has a lot to live up to.
Nobel Prize is mandate to exit Afghanistan,
Build a green-powered, nuke-free earth

Above the din, the Nobel message screams: “U.S. OUT OF AFGHANISTAN, GO FOR SOLARTOPIA!”

It’s now up to US to use that Nobel to win that dual prize.

This award never went to two of the most critical peacemakers of the 20th Century: Mahatma Gandhi, who pioneered the successful use of mass non-violence; and Eleanor Roosevelt, feminist godmother of the New Deal’s social programs and the Universal Declaration of Human Rights.

It has not gone to Cesar Chavez, Ken Saro-Wiwa, Thich Nhat Hanh, Paul XIII and so many more.

But yes it did to Barack Obama. Why?

Right now we have no choice but to defer to the committee that took the plunge. Chairman Thorbjoern Jagland explained that “It could be too late to respond three years from now. It is now we have an opportunity to respond — all of us.”

“We couldn’t get around these deep changes that are taking place” under Obama.

ARE taking place? Or WILL take place? Or MIGHT take place if somebody plays this card right.

Say you’re a committee member desperate for peace and a solution to climate chaos.

Maybe you’re a gambler. You remember giving the Prize to Desmond Tutu for fighting apartheid before it was abolished.

You say: “This new kid talks a great game. He’s made a green and peaceful feint or two. But the generals and fossil/nukers are at his throat.

“Let’s box him in. Let’s hang this Nobel around his neck… and over his head. Let’s DARE him to do right.”

Or, as Jagland has actually put it, the award will give Obama “encouragement” and “support in producing concrete results” for the “vision of a nuclear-free world” among other things.

Now let’s say you’re an American activist. You’re desperate to stop the worst mistake America could make since Lyndon Johnson’s 1965 escalation of the Vietnam War — that is, a murderous, suicidal escalation of the war in Afghanistan.

We all know this would shred the last fiber of a failing society, utterly decimating any chance for an American moral, ecological or economic recovery.

But the long knives of Pentagon junta are out in force.

We also know without a massive Solartopian push for renewables and efficiency, the global climate is doomed. Nuclear power must be excluded and fossil fuels phased out.

Now this glib young prez, who must stand up to the generals and King CONG (Coal, Oil, Nukes, Gas) is given — or shall we say, stuck with — the Nobel Prize.

Pasted to his back now are the words of Alfred Nobel lauding “the person who shall have done the most or the best work for fraternity between the nations and the abolition or reduction of standing armies and the formation and spreading of peace congresses.”

Obama rightly says he does not deserve “to be in the company of so many of the transformative figures who’ve been honored by this prize.”

But the Committee, which cited Afghanistan, climate change and nuclear disarmament in its decision, is clearly betting this marker might help him — FORCE him — to get there.

Obama could, of course, use it as cover — Henry Kissinger style — to do the wrong things.

But this gift is not to Obama. It’s to US, as a tool to MAKE him go where we must.

The spotlight has now been amped. The focus is on Aghanistan and a green-powered, nuke-free Earth.

The Nobel is a mandate — a sacred trust — to push this president into the pantheon with Martin Luther King and Nelson Mandela, not to mention Eleanor Roosevelt and Mahatma Gandhi.

Ready or not, we have our opening to make Barack Obama rise to their standard.

6 Responses to Nobel Screams : ‘Out of Afghanistan’