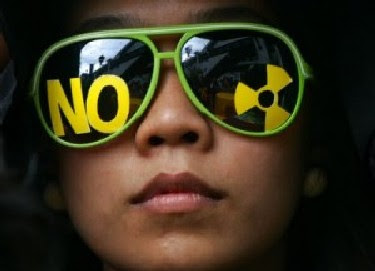 ‘If history repeats itself as farce, then the nuclear power industry represents the most incompetent jester of all time…’

The usually supine Nuclear Regulatory Commission has told Toshiba’s Westinghouse Corporation that its “standardized” AP-1000 design might not withstand hurricanes, tornadoes or earthquakes.

Regulators in France, Finland, and the UK have raised safety concerns about AREVA’s flagship EPR reactor. The front group for France’s national nuclear power industry, AREVA’s vanguard project in Finland, is at least three years behind schedule and at least $3 billion over budget.

And the Obama Administration indicates it will end efforts to license the proposed radioactive waste repository at Yucca Mountain, Nevada. After more than fifty years of trying, the nuclear industry has not a single prospective central dump site.

“If history repeats itself as farce, then the nuclear power industry represents the most incompetent jester of all time,” says Michael Mariotte of the Nuclear Information and Resource Service. It “seems intent on repeating every possible mistake of its failed past—from promoting inadequate, ever-changing reactor designs to blowing through even the largest imaginable budgets. If the computer industry followed the practices of the nuclear industry, we’d still be waiting for the first digital device that could fit in a space smaller than a warehouse and cost less than a family’s annual income.”

Nuclear sites throughout the world sit on or near earthquake faults. Ohio’s Perry reactor was damaged by a tremor in 1986, just before it went on line. In 1991 Hurricane Andrew did $100 million in damage to Florida’s Turkey Point, causing a critical loss of off-site communication. In 2007 a massive earthquake shook Japan’s Kashiwazaki, shutting seven reactors.

And radioactive waste continues to build up at sites throughout the world, including some 50,000 metric tons here in the U.S.

The vote of no confidence from regulators in three European countries has stunned AREVA, not to mention its potential customers, including the United Arab Emirates. “It hasn’t helped at all,” says one key source. “One of the key arguments has been that the EPR is safer than all the others.”

That AREVA would sell reactors to the UAE at all has raised widespread fears that atomic Bombs will soon proliferate throughout the Middle East. Both India and Pakistan got radioactive weapons materials from their commercial reactors.

AREVA’s design safety fiasco follows a Pink Panther-style stumble in October, when federal and state officials bailed on a massive media celebration planned for the Cadarache nuclear facility’s 50th anniversary. As much as 39 pounds of plutonium dust is now believed to contaminate the historic research center, enough to make numerous Nagasaki-sized Bombs.

According to the Financial Times, “the discovery that France’s Atomic Energy Commission (CEA) had wildly under-estimated the quantity of plutonium dust that would accumulate — and then delayed notifying the Nuclear Safety Authority — has led the latter to hand its findings to the public prosecutor, who will decide if there should be an investigation into the CEA’s management… This is a severe blow to the credibility of the CEA, flagship of French nuclear research, and to Cadarache, soon to be the site of the world’s first fusion reactor.”

The uproar, writes Peggy Hollinger, has “cast a shadow over the Nuclear Safety Authority’s behaviour since it became independent of the government.”

Finnish regulators have also gone to virtual war with AREVA over the catastrophic Olkiluoto project. In a conversation with me in southern Ohio this summer CEO Anne Lauvergeon blamed AREVA’s problems on the Finns. But similar complaints are now coming from French regulators over AREVA’s parallel project at Flamanville, in northern France.

AREVA has also run afoul of British regulators, who say its massive incursions into the UK’s nuclear industry have raised serious safety concerns.

Meanwhile the U.S. Nuclear Regulatory Commission’s critique of the Westinghouse AP-1000 reactor has shattered the industry’s expensive image of a “renaissance” that is “ready to go.” As the machine of apparent choice at vanguard sites throughout the U.S., the industry has touted the AP-1000 as a standardized “cookie-cutter” design that might make reactor construction and operations easier to manage. Regulators in Florida and Georgia have already imposed massive consumer rate hikes to pay for proposed AP-1000 reactors. An army of high-priced lobbyists is pushing hard for huge subsidies and loan guarantees to go into the Climate Bill.

Wall Street has made it clear it will not finance (or insure) new reactor construction unless backed by the federal treasury. Congressional critics warn half the reactor construction loans are likely to go into default. “This only underscores Moody’s assessment that new reactors are ‘bet the farm’ investments,” says Michele Boyd of Physicians for Social Responsibility. “So why is the federal government going to back these projects with U.S. taxpayer dollars?”

Now these critiques from the American NRC and regulators in Britain, France and Finland confirm that no safe standardized design exists, either here or in France, and that the industry could be years away from finalizing one that can be successfully deployed.

The same applies to radioactive waste. The Obama Administration now seems poised to finalize its promise that “all license defense activities will be terminated” on the proposed Yucca Mountain dump. Distinguished by its $10 billion price tag and the visible earthquake fault running through it (not to mention the dormant volcanoes that surround it and the water perched at its peak), Yucca is bitterly opposed by some 80% of Nevada’s citizenry.

After a hugely subsidized half-century of futility, the U.S. reactor industry has not a single named prospect for a centralized commercial waste dump. The “solution” (about 32 minutes in), as put forth by Stewart Brand and other industry advocates, seems to be focused on leaving high level radioactive waste at the sites and letting future generations deal with it. In the years since the Shippingport (PA) reactor opened in 1957, the industry’s go-to device is a concrete “dry cask” with vent holes and armed guards.

Meanwhile, despite repeated industry denials, the bad news about the health impacts of reactor radiation pours in. “Downwind or near eight reactors that closed in the 1980s and 1990s,” says New York-based expert Joe Mangano, “there were immediate and sharp declines in infant deaths, birth defects, and child cancer incidence age 0-4” when the reactors shut. “The highest thyroid cancer rates in the U.S. are in a 90 mile radius of eastern PA/New Jersey/southern NY, an area with 16 reactors at seven plants, which is the greatest density in the U.S.”

The near-simultaneous demise of Yucca Mountain with the regulatory credibility of the AP-1000 and AREVA EPR, along with the attacks by Moody’s and other financial critics, might come as a death blow to any such technology in a sane society. But the financial reach of the atomic lobby remains powerful in Congress and the White House.

At this point, the only certainty about the future of reactor construction is that still more shoes will drop on an industry whose decomposed credibility has become legend.

[Harvey Wasserman is author of Solartopia! Our Green-Powered Earth and Senior Editor of freepress.org, where this article also appears.]

This entry was posted in Rag Bloggers and tagged Energy, Environment, Nuclear Power. Bookmark the permalink.