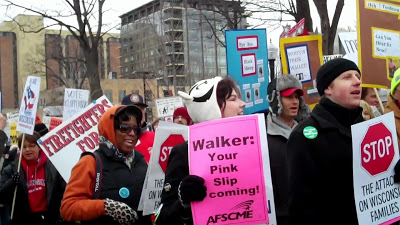 [This is the third of Paul Beckett’s reports from Madison for The Rag Blog.]

MADISON, Wisconsin — Saturday, March 12, 2011. The wind off the frozen lakes was often 20 miles an hour (or more) and from the north. Windchills were in the 20s. It was mainly cloudy. Here and there, old snow and ice remained, and where there was no ice, the Wisconsin Capitol grounds had been trampled into a slippery, muddy morass. And it was beautiful!

Absolutely unprecedented crowds gathered for a whole day of protest events. Police estimates were 100,000 (but exact estimates are impossible). The crowd filled the Capitol square streets, sidewalks and what once were lawns, and then flowed down State Street and Wisconsin Avenue.

The breadth of social groups protesting Governor Scott Walker’s “union-busting” and public service-cutting Budget Repair Bill was truly awesome. The private sector unions were there (often with major leadership figures). The public service unions (AFSCME and the teachers unions) were there. The firemen, policemen and prison staff were there. Teachers and workers had come from Michigan, where things are also bad. 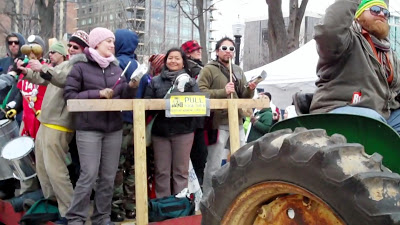 Farmers staged a tractor parade during the massive Madison protest. Photo by Paul Beckett / The Rag Blog.
Farmers came in, protesting the planned cutbacks in the Medicaid-based programs on which so many of them depend. Late in the morning a tractor parade pushed through the already-dense crowds, festooned with anti-Walker signs (many of them referring to the animal waste that is so familiar to farmers).

But the dominant impression one got was just of PEOPLE: all kinds of people, from all over Wisconsin, unaffiliated, unorganized. Just people. A feeling of complete like-mindedness and shared values and interests linked 100,000 people together.

By 3 p.m., when the main program began, no one could move. The 14 Democratic senators who had decamped to Illinois to thwart passage of Walker’s bill were welcomed back. Each gave a speech to tumultuous applause and chants of “Thank you! Thank you!” They had not, in fact, stopped the bill. But they had provided almost three weeks for understanding — and protest — to develop 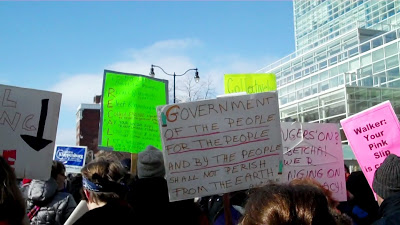 Photo by Paul Beckett / The Rag Blog.
Also, the holdout of the “Fab 14” ultimately forced the Walker camp to “pass” their bill in an abrupt night-time procedure that was full of parliamentary improprieties, and perhaps downright illegal.

The speakers (besides the 14, they included Jesse Jackson, Tony Shalhoub, and Susan Sarandon) noted that now the battle continues, but the battlefield changes.

Suits are already being brought to challenge the legality of the law in the courts.

More important in the longer run are the recall campaigns . While “Recall Walker” was a constant theme in signs and chants, under Wisconsin law that effort can not begin until next year. But petitions against eight Republican Senators have been filed, with May 2 deadlines for completion. There was an enormous sense of energy for these yesterday.

Meanwhile, a Utah-based anti-immigration group has already invaded Wisconsin (it is perfectly legal, it seems) to organize recalls against members of the Democratic “Fab 14” who got so much thanks and appreciation yesterday.

Control of the Wisconsin Senate will be determined during the coming summer by the outcome of these efforts.

Those who participated Saturday went home elated and politically energized in a way that few of us have been for some time. But all understood, as well, that Saturday did not mark the end of a battle, but its beginning. It will be a long battle for the future of Wisconsin, and no one can be sure of the outcome. And Wisconsin, in turn, clearly is just one battleground in the broader struggle for the country’s future.