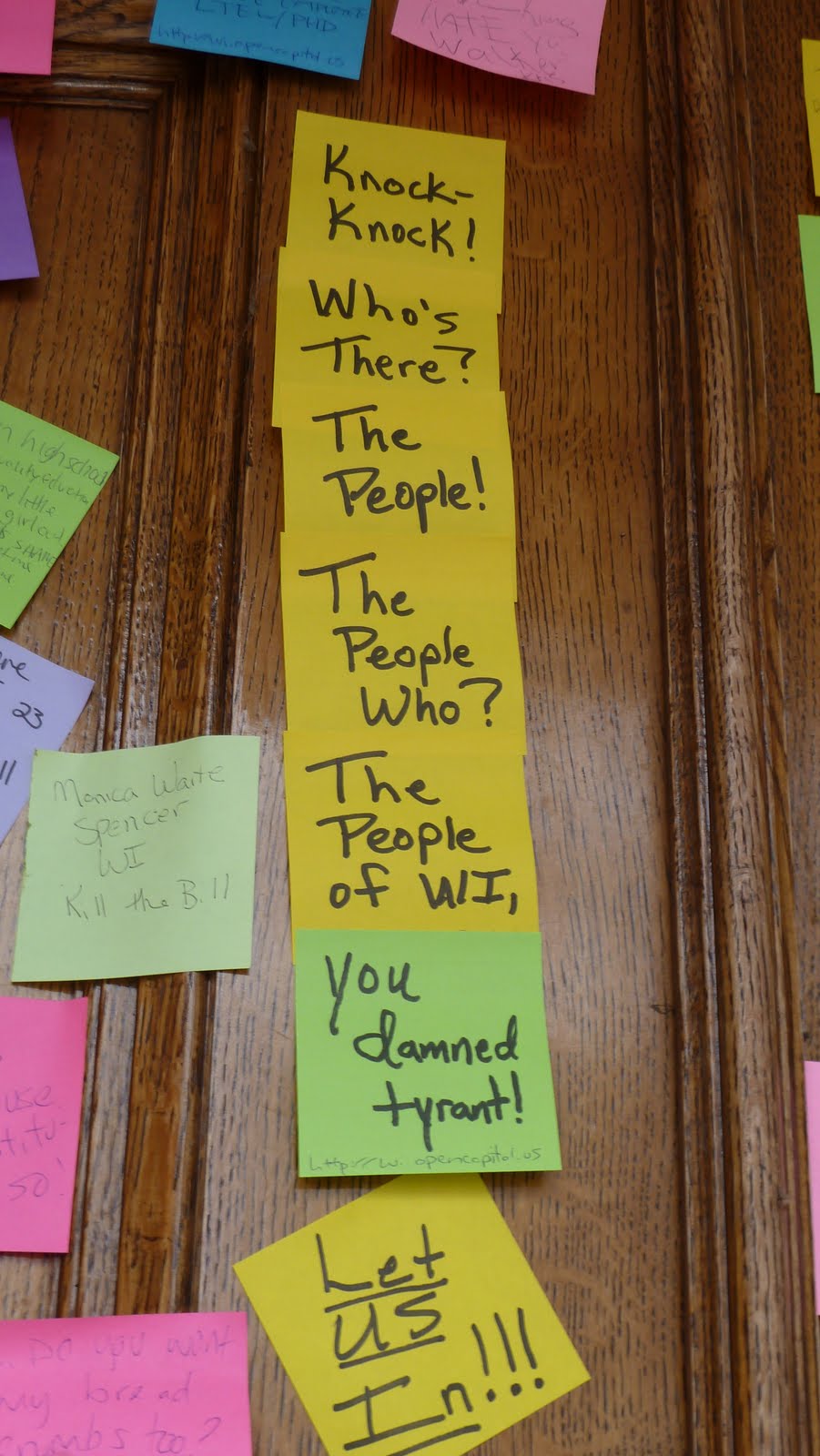 [This is the second of Paul Beckett’s reports from Madison for The Rag Blog.]

MADISON, Wisconson — In less than 24 hours, in a series of shocking and unprecedented developments, public sector union and collective bargaining rights in Wisconsin have been eviscerated by a Republican legislative majority controlled by Governor Scott Walker.

What seemed to Democratic legislative members and to neutral observers (but there are few of those in Wisconsin now) a putsch, began about 6 p.m. on the evening of Wednesday, March 9. As coups go, this one clearly was carefully — even brilliantly — prepared. The surprise was absolute.

Governor Walker spoke to a news conference on Monday, March 7. He referred to meetings at the Illinois border his staff had had with some of the 14 Democratic state senators who had left Wisconsin on February 17 in order to prevent passage of the “union busting” legislation, SB11. (See my article, “Madison and the Revolution at Home,” on The Rag Blog, March 8, 2010.)

A compromise was brewing, Walker implied. “The problem,” Walker said, “is Senator [Mark] Miller.” (Miller is the titular leader of the Senate Democrats.) Maybe it is time, Walker went on, for the Democratic caucus to elect a new leader.

All eyes turned to the Group of 14 Democratic senators: were they divided? Would one or more accept some form of compromise and enable the Republicans to complete their passage of SB11? (The presence of only ONE Democratic senator in the chamber would legitimate the vote passing SB11.] (Read the full text of SB11 here.)

Meanwhile, unperceived, Republicans prepared a trap that would snap shut on Wednesday. The complicated, 144-page “Budget Repair Bill” (SB11) was being taken apart by staff and reformulated, ostensibly to strip out everything BUT the collective bargaining provisions.

The result was labeled a conference amendment to SB11, and was only six pages shorter than the original. But the point was that this new version could be labeled as non-fiscal and would not carry the quorum requirement of the original.

A bizarre reversal of positions was now apparent. Incorporation of the collective bargaining provisions within the Budget Repair Bill, very definitely a “fiscal” measure, had been stoutly justified by Governor Walker on the grounds that they were inseparable from the fiscal repair provisions. (Opponents had argued that the provisions had nothing to do with fiscal “repair” and should be taken out of the Budget Repair Bill and debated separately.)

Now, the Republican position was the opposite. The new version was NOT fiscal. With the quorum requirement changed, whether the Group of 14 were in the Chamber or in Illinois was immaterial. The bill could be passed with Republican votes alone.

The ambush worked perfectly. Democrats and protesters remained focused on the hold-out by the 14 Senators and on the possibility of compromise. Word of Walker’s plan leaked out only at the last minute, late on Wednesday afternoon. Beginning about 5:30 p.m. a cluster of emails, most of them billed “emergency,” appeared in my email inbox. The following, from the Dane County Democrats, is typical:

Breaking Update: Tonight at 6:00 pm in the Senate Parlor we are hearing that Senate GOP is going to split the budget repair bill, fiscal from non-fiscal, and ram it through in the dark of night. Given that they’re attempting to ram through the bill without any media attention we wanted to let you know that very important developments are likely to occur tonight at 6:00 pm in the Senate Parlor.

Please be at the capital by 6:00PM TONIGHT!

Actually, I did not receive any of the emails until the next day. I was having a quick dinner a block away from the Capitol at Ian’s Pizza (an enterprise that has become known internationally for its role in keeping the protesters in the Capitol Rotunda sustained). I was on the way to a 7 p.m. debate between Madison’s two mayoral candidates.

The word spread amazingly. By 6 p.m. hundreds were there; very soon thousands. It was dark. Everyone wanted to enter the Capitol. A long line formed at the only entrance that was (in a limited way) open. The line moved glacially. Inside, on the other side of the revolving door, protesters were packed, waiting, apparently, to be taken one-by-one through the security wanding procedure. Noise was deafening: “Whose house? Our house!”

Soon, however, any pretense of an open Capitol was abandoned; the police closed the doors absolutely, leaving some inside and thousands outside. People were angry. 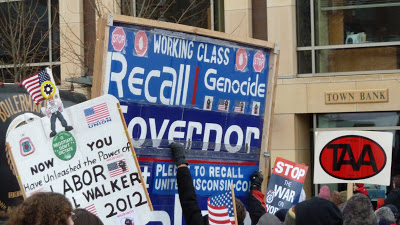 Photo by Paul Beckett / The Rag Blog.
In the meantime, inside the Senate chamber, the deed was already done. In less than half an hour, a “conference committee” had reported out the revised bill. The committee Chair gaveled the meeting closed as the Democratic minority leader, Peter Barca, was shouting out the many ways in which the meeting was improper under the rules of the Legislature or illegal under state law.

The bill was then instantaneously passed (or “passed”) by the Senate Republicans.

By about 6:25 p.m. it was all done. The session was immediately adjourned, and the Republican Members were reportedly smuggled out of the Capitol building and beyond the crowds through a tunnel. (Their escape and removal by a special Madison Metro bus was not as secret as they would have liked.)

The word spread among the protesters and, more than any other time in the three weeks of protest, the mood was one of deep anger and frustration. Later in the evening some of the inside protesters opened an unguarded outside door. Crowds outside pushed in, brushing aside the police, who had raced to stop them. Thousands ended up inside, chanting, commiserating, venting. Most left by 2 or 3 a.m.

The expectation was that the building would open at 8 a.m. Thursday morning and that the Assembly would begin passage of the “conference amendment” by 9 a.m. In fact, the building did not reopen in the morning. The Department of Administration announced that an “assessment of building security requirements” was in progress. By 11 a trickle of protesters was permitted in as the Assembly slowly began to organize itself for the crucial session to pass the Senate version.

The session, billed a “Special Session” to allow more flexibility with rules and the traditions of the “Body” as it is always called, was brought to order at 12:34 p.m. Incongruously (considering he had been refused entry to the Capitol an hour or so earlier), the Reverend Jesse Jackson was allowed to deliver an opening prayer. He took no sides on the issues, and insisted that the legislators join hands (literally) across the aisle. They did, and then a bitter partisan verbal battle began.

A little over three hours of speeches were allowed. Most of these were from Democratic representatives clad in the bright orange T shirts proclaiming workers’ rights that they had adopted three weeks before. The session was broadcast by WisconsinEye and is available for viewing here.

The Democrats argued the illegality of procedures. They asserted that the bill before the Assembly was not the same one that had been before the Senate, and that senators (they were all Republican) had not been informed, had not been given copies of the new legislation, and could not have understood what they were voting for. They cited the shame brought on “this Body,” and on Wisconsin by all that had been done over the recent days and weeks.

More than that, they condemned the loss of workers’ rights and human rights, and the great harm that would be done to Wisconsin families and communities by the bill. Representative Tamara Grigsby, Democrat from the 18th District, delivered a particularly powerful and moving speech. (Had this reporter been a member of the Republican caucus he would have instantly moved across the aisle, sobbing with shame.)

To no avail. At 3:40 in the afternoon, abruptly, with some 20 representatives still to speak, the chair called for the vote (it is electronic and almost instantaneous), announced that the bill was passed, and adjourned the meeting.

The Republicans once again dematerialized mysteriously from the Capitol building.

It was over. Or, perhaps, just begun. The Democratic Party and labor unions are filing complaints and suits challenging the legality of the bill’s passage. The Governor’s use of the State Patrol (now under the direction of the father of Scott Fitzgerald, leader of the Senate Republicans, and his brother Jeff Fitzgerald, leader of the Assembly Republicans) to enforce the Capitol closures is being challenged.

But it has been understood from the beginning that this is less a legislative battle than a long-term political one that will touch every community and involve every important issue. It is not an exaggeration to say that the future of Wisconsin is at stake. And as Michael Moore has been saying so eloquently, the implications for the nation are huge.

Already planned for Saturday, March 12, is a major protest, bringing together farmers (who will mount a “tractorcade” around the Capitol square), labor, educators, students, liberal-progressives from all over the state, and many members of smaller communities that are becoming aware of the hit their schools and local governments are about to take from the Walker budget. Major speakers are invited, and it is reported that the 14 Democratic Senators will return to thank the public for their support.

Recall campaigns are planned on both sides. Under Wisconsin’s recall law almost a year must go by before a campaign to recall Scott Walker can begin. The same is true of Assembly members. So effectively, only senators are presently subject to recall. A bevy of progressive organizations are organizing campaigns directed against at least four of the Republican senators and, so far, there seems to be enormous energy behind these. Success would shift the Senate back to Democratic hands. The Republican recall campaigns, if they are pursued, would be directed against members of the “Group of 14” representing swing districts.

The political fallout of this tempestuous three weeks events will soon begin to be known. It is interesting, already, that one Republican senator and four Republican representatives voted against the “conference amendment.” And there is speculation that one reason that Scott Walker opted for this radical and legally risky legislative maneuver was that he sensed weakening on the part of other of the Republican senators.