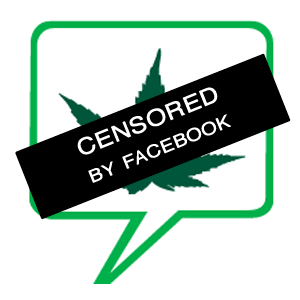 Those control freaks who run Facebook are doing it again. This time, as you probably know, they’re not allowing the image of a marijuana leaf — because it’s “illegal content” — to appear in ads from the “Just Say Now” campaign for the legalization of pot, which is sponsored by Students for a Sensible Drug Policy. It’s not the first time Facebook has indulged in chickenshit censorship. Below is my piece about it that was published in the May issue of High Times.

Mikal Gilmore, one of the best journalists covering the counterculture, is the author of Stories Done: Writings On the 1960s and Its Discontents. “For more than half of the subjects here,” he states, “including Ken Kesey, Timothy Leary and the Haight-Ashbury, psychedelics were a major factor in their lives…” But recently Gilmore himself had a bad trip, resulting from an overdose of the modern drug, Facebook.

Like so many others, his account was shut down, and they wouldn’t tell him why he was kicked off the island, so that he had no way of knowing what he did wrong or how to avoid doing it again. A Facebook friend who attempted to contact him with no success informed me that, “after numerous tries, I got this horrible warning that covered the screen screaming ‘DANGEROUS.’ Holy shit! To say it was disconcerting is an understatement.”

Gilmore explained the situation to me:

I was booted, I’m told, because of an image I posted. I was listening one night a few months ago to an early 1970s pop album by Joey Heatherton, and I was struck by her voice, how good it could be when she worked at it. I posted something to that effect, and I also posted the album cover, which I always try to do when I mention some music or music artist (or a book or movie).

This particular album has a photo of Heatherton baring her breasts. Last week, I couldn’t access my account and was told I’d been dropped for violating Facebook policy, but they couldn’t tell me what the specific offense was because, “for security reasons,” they just can’t do that.

Since I’d acquired several friends at Facebook, and because my wife loves to take matters in hand, several people there raised a ruckus. I didn’t ask anybody to. In fact, I thought my deactivation was just some fluke mistake, but Facebook refused to answer any of my inquiries, and also refused to answer anybody else’s protests.

I was going to give up any idea of rejoining. Then, the same day I came to that conclusion, Facebook restored me, and told me they had deleted the offensive image. They never told me what the image was, but a Facebook member who has a relative at the place finally learned that it was the Heatherton album cover, and that Facebook had taken the action because another Facebook member had complained about the image.

Meanwhile, attorney Brian Cuban was fighting his own battle with Facebook, trying to get them to remove pages for Holocaust denial groups. He agreed with me that the First Amendment doesn’t apply to private companies, but he added, “I think you have to look at the way free speech is evolving in historical context. We have come into an age where, with the advent of the Internet and unchecked values out there in the blogosphere, mere words have in fact driven people to commit violent acts.”

I asked, “When you spoke to Facebook about why they don’t tell people why they were dropped, how did they justify that?”

It was a justification of cost/benefit. I think they would love to give everyone a detailed explanation of why they’ve been dropped to prove there is no conspiracy there, as many people believe. In my battle with Facebook over Holocaust denial groups, I have been hit with countless e-mails asking me to ask them why there’s a Jewish conspiracy at Facebook — to get rid of Jewish activists and to get rid of Jews in general — because we’re raising all this fuss about Holocaust denial. In reality, I think it’s just cost/benefit. They don’t have the intrastructure to give everyone an explanation.