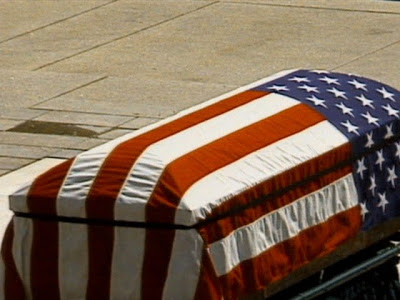 On April 5, 2009,the American public saw the flag-draped casket of a fallen service member for the first time since 1991 — that of Staff Sergeant Phillip Meyers. Sadly, we’ve seen way too many more.
Milestone of death: 1,000 GIs
And God knows how many Afghans

For this kind of death, God is inconsolable, and we should be as well.

We have nearly reached the tragic milestone of the death of the 1,000th U.S. soldier in Afghanistan. As of this writing, the most reliable source (icasualities.org) lists 998 U.S. soldiers as having died in Afghanistan. So it is sadly probable that the milestone will be reached in the next few days. Check the link above.

God only knows how many Afghans have now died in this war, including many civilians — just recently, an entire family, including six children, in a house bombed by “mistake,” for which the U.S. military “apologized.” But no apology can redress those deaths. We can mourn them, however, along with the American dead.

Various groups are preparing vigils throughout the USA. Some will be the day after, others are scheduled for the next working day. There seems to be no national list; if you find one near you, I urge you to join it and/or to mark this moment in prayerful communal services or private prayer and meditation this weekend.

I hope and urge that such memorial events will mourn the human and economic cost of war, call for the troops to come home, and support transferring most of the funds being spent for death to meeting the urgent public needs of our own country, with some going to fund an Afghan-led reconstruction of the war-torn country.

[Rabbi Arthur Waskow is director of The Shalom Center; co-author of The Tent of Abraham; author of Godwrestling — Round 2, Down-to-Earth Judaism — and a dozen other books on Jewish thought and practice, as well as books on U.S. public policy. The Shalom Center voices a new prophetic agenda in Jewish, multireligious, and American life.]

Editor’s note: As we publish this article, the total of GI deaths in Afghanistan stands at 999.