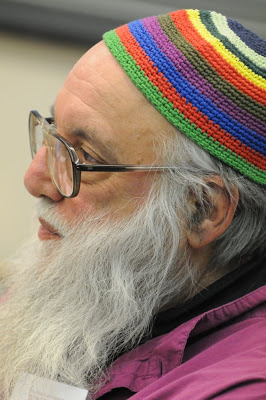 Rabbi Arthur Waskow, pictured at the North America Conference of Rabbis for Human Rights held in Washington, D.C., in December 2008.

If the U.S. insists on peace in the Middle East, will there be a crisis over values and identity within American Jewish life?

Is the American Jewish community headed for a deep internal split over our values and commitments if the U.S. and Israeli governments collide over whether to be serious about a two-state peace settlement?

The Israeli-Palestinian collision, since Hamas rocket attacks on parts of Israel and the Israeli bombing and invasion of Gaza, has now reached a crisis point. It has become both a special case of the collision between some elements of Islam and some elements of the West — and a burning source of anger on both sides that makes harder any peaceful resolution of issues between the West (especially the U.S.) and some Muslim states and organizations.

On both sides of these divides, there are some who itch for outright war, and some who seek peaceful relationships. The U.S. was attacked on its own soil by a group claiming legitimacy as Muslim, though the overwhelming majority of Muslim teachers and leaders in the world have rejected that claim. The U.S. government is now militarily occupying two majority-Muslim states (Iraq and Afghanistan), is openly attacking villages and regions in another (Pakistan), is constantly hinting at both war and diplomacy with a fourth (Iran), and is closely allied with a state –- Israel–that is militarily occupying and blockading a fifth mostly-Muslim people — Palestine.

It is not hard to see why many Americans view Muslims and Islam as “the enemy,” and why many Muslims view the U.S. government as “the enemy.”

In this situation, the Israel-Palestine relationship is a source of great danger to the U.S. as well as to both colliding peoples. The new American president has asserted a strong American interest in peacefully resolving that conflict. But he, and all of us, face deep intransigence and a propensity to violence both in the Israeli government and in the leadership of the Palestinian people.

Most Americans and most Israelis have gotten used to a relationship in which the U.S. government mouths a wish for peace but does almost nothing to press Israeli policy toward necessary steps for making peace. U.S. policy has been carrots for Israel, sticks for Palestine. Neither has worked.

It is not yet clear whether President Obama is ready to use pressure against Israeli policies of occupation and blockade. If he does, there will be not merely a deep political crisis within the American Jewish community, but a deep identity crisis: can American Jews whose values seek peace and who admire Obama break with an Israeli government that refuses to take the crucial steps for peace? What would such a collision mean for the comfortable assumption of most American Jews that there is no conflict between their commitment to liberal values and American interests, and their commitment to Israel?

One step even deeper into the values crisis: Forget about U.S. policy. If the Israeli government’s behavior and policy diverge further and further from the values of peace and justice rooted in prophetic and rabbinic teaching, will American Jews choose to support Israeli government policy anyway, or pursue their ethical commitments?

There is no real contradiction between commitment to Israel and support for a U.S. peacemaking policy. It is clear that no American policy will abandon support and protection for Israel. But to make peace, it will be necessary to end the Israeli occupation of the West Bank and East Jerusalem, the settlement of hundreds of thousands of Israelis there, and the blockade of civilian goods from entering Gaza.

By now, so many Israeli Jews and American Jews have gotten so used to the sense of control and the economic benefits of occupation and settlement that many will think that dismantling the occupation is an attack on Israel. They may react that way even if part of the proposed peaceful solution is a great advance in Israeli security through a full peace treaty between Israel, a new Palestine, and all Arab states.

Obama is extraordinarily adept at changing atmospherics in foreign affairs; but it is not so clear he will carry through with policy change if the going gets rough and the opposition gets rancorous. For example, to persuade the Israeli government to dismantle Israeli settlements on Palestinian land it might be necessary for the U.S. to threaten to cancel military aid equal in dollars to the amount the Israeli government spends in supporting and subsidizing the settlements. Would Obama be willing to take on that political firestorm?

If so, it will be important for some American Jews to take public independent positions despite the bitter attacks that would be likely to come from the right and center of “established” American Jewish life.

Already I know of rabbis, professors, and other people who have been bitterly attacked for expressing such views as calling for an independent investigation of charges that both Israelis and Palestinians committed war crimes during the battle over Gaza. Those attacks have intensified because some in established Jewish organizations see that a crisis is looming, and are fearfully trying to circle the wagons before it erupts.

That is why it is important to build support for the five “pro-peace, pro-Israel” organizations and the one rabbinic Israel-connected human-rights group that have already built a solid base in the American Jewish community, among Jews who take seriously their commitment to Israel. I am NOT saying these organizations do or would adopt the kind of position I have just described. But they come with an independent mindset that will be crucial in a crisis.

1. J Street, a lobbying group that has in one year built a strong base of contributors and a strong network of connections on Capitol Hill. Its emergence and swift creation of a strong Email constituency has rattled the established Jewish organizations more than any of the other groups, since it poses a direct challenge to AIPAC.

2. Brit Tzedek v’Shalom (Jewish Alliance for Justice & Peace). Grass-roots organization with a number of chapters, a rabbinic cabinet, and a program for bringing members to lobby Congress on special occasions.

One recent Brit Tzedek initiative is a pledge, as follows:

WE’VE GOT YOUR BACK, MR. PRESIDENT

Please know that I share your sense of urgency to bring peace to the Middle East. Therefore, I pledge:

In Hebrew, the words for wind and for spirit are one and the same—ruach. As you work for peace, I promise that the ruach of the American Jewish people and our friends in the pro-Israel community will be at your back.

3. Americans for Peace Now. Grew out of and mostly beyond connections to Shalom Achshav, which used to be the strongest of Israeli peace groups. APN does not sponsor chapters, has focused on educational work around the constant growth of Israeli settlements on the West Bank, and has some connections with Obama administration foreign-policy staff.

4. Israel Policy Forum, a think tank that grew out of the Israeli Labor Party while it was still committed to peacemaking. IPF now has a more explicit, forceful, and iconoclastic position than the others in urging US insistence that Israel move toward peace.

6. Rabbis for Human Rights/ North America. RHR/NA both supports the human rights work of RHR in Israel and carries out its own work for human rights in America, focused on ending the use of torture. It is constrained by its focus on human rights and its connections to RHR in Israel to walk very carefully on (or to avoid) broader peace questions.

For the sake of America, Israel, and Palestine, this is important work.

[Rabbi Arthur Waskow, a regular contributor to The Rag Blog, is director of The Shalom Center. Rabbi Waskow is co-author of The Tent of Abraham, author of Godwrestling — Round 2, Down-to-Earth Judaism, and a dozen other books on Jewish thought and practice, as well as books on U.S. public policy. The Shalom Center voices a new prophetic agenda in Jewish, multireligious, and American life. To receive the weekly on-line Shalom Report, click here.]