Rabbi Arthur Waskow: Yom Kippur and the Middle East : Our Misdeeds and Theirs 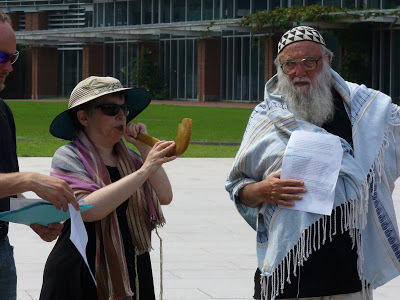 Rabbi Rebecca Alpert blows Shofar at Fast for Gaza event at Liberty Bell in Philadelphia. At right is Rabbi Arthur Waskow.
We are called to reexamine our actions

Jews — and all others who care for peace — must act in new ways to turn toward compassion, truth, justice, and peace.

During these days between Rosh Hashanah and Yom Kippur, Jews are called on to reexamine our own actions — our “missings of the mark.” The emphasis is on OUR sins — not those of individuals alone, but of the community — and the sins of ourselves, not of other people, even our enemies. We are also called on not only to confess our misdeeds but CHANGE what we do.

In that light, the Israeli government’s recent behavior flies in the face of this profound Jewish wisdom. So Jews — and all others who care for peace — must act in new ways to turn toward compassion, truth, justice, and peace.

Two major actions we might take NOW, at this solemn time of year:

Against the consensus of almost all decent and democratic opinion in the world, the present Israeli government has:

I want to say a bit more about the Goldstone report. Before Goldstone, it had smelly origins — commissioned by an anti-Israel corner of the UN. But through the workings of international politics in the direction of justice, the job was handed to an affirmative Jew with strong Zionist connections, a giant of international law, who insisted on studying the possibility of war crimes by both Hamas and the government of Israel.

The report finds high probability that on both sides there were war crimes, cites the evidence in great detail, and asserts the need for formal judicial investigation by both governments. It proposes giving both six months to do this, and if they fail, asking the Security Council to refer the evidence to the International Criminal Court.

The U.S. government’s critique of the Goldstone Report, as voiced by Ambassador Susan Rice, is rooted in this fallacy of origins. It almost signals the silliness of this approach by then urging that all action on the report be confined to precisely this smelly corner of the UN, rather than to other places that are far more just. More likely, beneath this fallacious rhetoric was a policy evasion of the duty of all governments to make sure that if war crimes were committed, they are punished.

Goldstone himself is a distinguished South African Jew whose daughter has called him a Zionist, who took an important role in the truth and reconciliation process in South Africa, and who served as chief prosecutor of the United Nations International Criminal Tribunals for the former Yugoslavia and for Rwanda from 1994 to 1996. He was a member of the Commission of Enquiry into the Activities of Nazism in Argentina (CEANA) which was established in 1997 to identify Nazi war criminals who had emigrated to Argentina, and transferred victim assets (Nazi gold) there.

From the beginning, his UN task was to look into possible war crimes by both sides in the Gaza War. He attempted to interview Israelis who had been attacked in Sderot, but his team was denied entry to Israel. So the commission paid to have Israeli witnesses travel to where their evidence could be heard.

The Israeli government’s hostility from the git-go seems to me the behavior of a guilty party that did not want even-handed judgment, even if that meant its enemies as well as itself were judged.

The Goldstone Report indeed said there was serious evidence of specific war crimes by both sides, and called for judicial trials. President Shimon Peres of Israel attacked the report in the following terms:

“War itself is a crime. The aggressor is the criminal. The side exercising self-defense has no other alternative.
[….]
“The report legitimizes terrorist activity, the pursuit of murder and death. The report disregards the duty and right of self defense, held by every sovereign state as enshrined in the UN Charter.”

There are two falsehoods in this statement. First, far from “legitimizing” terrorist activity, the report describes it as a war crime. Secondly, Mr. Peres ignored the truth of international law that even a war of “self-defense” has limits in how it can be fought. For example, white phosphorus cannot be used against civilians. The Palestinians, of course, claim that their war was one of self-defense. But even if it were, it was forbidden to fight it by attacking civilian neighborhoods.

The Israeli government could have responded by saying it welcomed full judicial process and would live by its result. Its actual response therefore compounds its original misdeeds.

Let me then propose an action agenda for tshuvah (repentance and change) for this sacred time, and beyond:

1. Join the Jewish Fast for Gaza (Taanit Tzedek) — a one day a month fast to call for an end to the blockade of civilian items and a decision by the U.S. and Israeli governments to negotiate with the Gaza leadership. Four weeks ago, the founders of the Fast — Rabbis Brian Walt and Brant Rosen — were personally attacked for their work by an Israeli with words like “borderline anti-Semitic.”

In fact, Rabbis Walt and Rosen are Reconstructionist rabbis of great honor and repute. Rabbi Walt founded a vibrant and flourishing congregation in Philadelphia, Mishkan Shalom, and left it to devote full-time work to Rabbis for Human Rights/ North America, directing its support for RHR in Israel and its work to oppose the use of torture by the U.S. government. Rabbi Rosen leads the Jewish Reconstructionist Congregation of Evanston Illinois, which among other notable feats, totally rebuilt its building to the level of green effectiveness worthy to receive the LEED Platinum designation, alone among all U.S. synagogues.

Their response to that attack on them and the Fast for Gaza (which has been affirmed by more than 70 rabbis, as well as a number of Christian clergy and Imams and hundreds of others) has now been published by the Jerusalem Post. Notably, it utterly refrains from name-calling or recriminations against their attacker, and focuses on the facts about Gaza that gave rise to the Taanit Tzedek.

To read their response and join the Fast, click here.

2. Sign up for the unprecedented conference on October 25-28 in Washington DC called by J Street and 17 other pro-Israel, pro-peace organizations, including The Shalom Center, to work for US policy to become serious and unremitting for a two-state peace, including support for the Obama Administration’s demand for a total freeze on all increase of Israeli settlers or settlements on the West Bank and East Jerusalem. Click here.

P.S. Meanwhile, part of the American Jewish official leadership has urged all American rabbis to use the High Holy Days to emphasize the sins of the present government of Iran against its own people, against the history and legitimacy of the Jewish people, and against international comity and concern. This effort called for tougher sanctions against Iran. Those sins are real and glaring, and should be addressed not only by Jews but by veryone committed to peace.

But focusing only on them at this moment — when we are wisely taught to address our own misdeeds — encourages American Jews to turn away from acknowledging and addressing the sins of the two governments that might be considered “ours”: the US and Israeli governments.

And when we do turn to the Iranian misdeeds, I think tougher sanctions are likely to unify the Iranian people to support even a government they loathe against what they will see as foreign “oppression,” rather than encouraging them to strengthen their resistance to Ahmadinejad. We should discuss ways to do the second.

P.S. 2. I came through my leg surgery last Friday fairly well, and I expect to leave the hospital Wednesday or Thursday. We are once more seeking the insurance company’s support to go to an intensive rehab facility. I’ll keep you updated. I did make some new discoveries about the relationship of patient pain to physicians’ judgments. That deserves its own report.