Refuseniks : Israel’s Shministim say ‘No’ to Occupation of Palestine 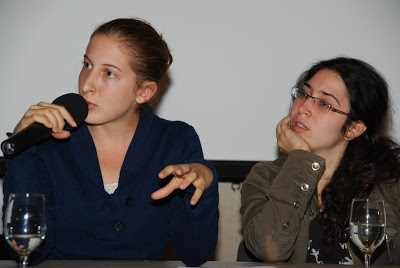 NEW YORK — Shministim is a Hebrew word meaning twelfth graders — but it means much more than that in the context of Israeli society and the occupation of Palestine.

Shministim was the name adopted by a group of high school seniors who, in 1970, sent a letter to then Prime Minister Golda Meir, explaining that they declined to serve in the Israeli Defense Force due to the IDF’s role in policing the occupation of the West Bank and Gaza. In 1987, a second Shministim group was formed, again composed of high school students who refused to serve in occupied Palestine.

In 2001, a third instance of the sarvanim — or refusenik — movement arose. Members of this third incarnation of the student group are currently touring the U.S. The tour was organized by Jewish Voice for Peace and is being aided by CodePINK.

On September 30, two Shministim refusers, Maya Wind and Netta Mishly, spoke at the Unitarian Church of Staten Island. The event was co-sponsored by the UCSI and Peace Action Staten Island.

The two young women began their presentation with a description of how conscription works in Israel. It is mandatory for all Jews and some non-Jews as well. Women serve two years, men, three. Draft dodging is very common.

According to Wind, 40 percent of those required to serve elude the draft as a variety of loopholes exist. Orthodox Jews are exempted on religious grounds and married women are also not required to serve. Physical ailments are a third way out of military service and mental illness — real or invented — is “another popular one,” Wind said.

Israel also grants conscientious objector status to some conscriptees, although potential COs must convince a panel that they are “universal pacifists” who will not fight under any circumstances. The last officially accepted category is “misfitting” which, according to Ms. Wind, includes “everything from smoking pot in high school to a rough socioeconomic background.”

But the Shministim do not fit into any of these categories. They are refuseniks with a political cause — “selective refusers” who reject Israeli policy towards Palestine and its peoples. Because they are not pacifists and cite a political reason for their refusal, they often become political prisoners of the Israeli military.

Maya Wind read a portion of a Shministim letter that was sent to the Israeli political leaders. The section mentioned several “defense methods” the Shministim find objectionable: “checkpoints, targeted killing (of Palestinians), roads for Jews only, sieges and war.” The conclusion of the statement summarized the Shministim position saying it was “impossible to be moral and serve the occupation.”

Netta Mishly described the process of becoming a refusenik. Draftees receive orders to report to base. On arrival each conscript receives an order, in effect the order states you are now a soldier of the IDF. It is at this point the Shministim refuse.

Having refused a direct order, the refuseniks are sent to military prison. When they are released, the Shministim return to base where they are again ordered to become soldiers. Additional refusals provoke additional jail time. This sequence can loop any number of times.

It can be broken by the refusenik asking to see a psychiatrist — or being ordered to see one. If found mentally unfit, the refusenik is exempted from military service. In theory a conscript can be held in prison for ten years but according to Mishly no one has been held beyond two years.

The reason behind the refusal

Maya Wind and Netta Mishly discussed the rationale for the Shministim refusal to serve the occupation in detail. The discussion began with a slideshow depicting the Israeli appropriation of Palestinian land, starting in 1947 and intensifying after the 1948 war. The war resulted in a large land grab that Israelis call independence and Palestinians call the Nakba (catastrophe).

The 1947 partition scheme gave 30 percent of the population (Israelis) 55 percent of the land, Wind said. Since then the Israelis have made encroachment on the remaining lands a centerpiece of domestic and foreign policy. And integral to the encroachment and appropriation is the occupation.

Ms. Mishly described the “three elements of the occupation” in some detail: settlements, check points and “separation barriers” (the Wall).

“The settlements are in very strategic points.” she said.

The settlements are used to justify the army’s presence in Palestine. The settlers, the checkpoints that protect them, and the army personnel that garrison the checkpoints have been deployed for “purely economic reasons,” Mishly said.

The 260 checkpoints make it very difficult for Palestinians to move freely and this is by design, according to Wind and Mishly. Travel permits are required and membership in an organization the Israelis oppose can result in a permit being revoked. This can be devastating as Palestinians must funnel through checkpoints to go to school and hospital — as well as to work.

The official rationale argues that checkpoints are for security and protect Israelis. Ms. Wind disagrees.

The checkpoint system is an aspect of military service the Shministim find particularly objectionable. Wind pointed out that having to wear 80 pounds of equipment, “in all weather,” while strip searching Palestinians who stand on line for hours makes for surly soldiers who are also scared for their own safety. This often results in IDF soldiers abusing Palestinians, Wind said. None of this furthers the peace process.

Up against the wall

Ms. Mishly discussed The Wall, the so-called separation barrier, which is located inside the West Bank — as opposed to encircling the territory. The fact that the Wall winds through Palestinian territory, rather than containing it — erected in areas where settlements are planned but not yet built — would seem to indicate that its purpose is not security but continued encroachment into Palestinian lands, in the form of settlements.

The settlements allow Jews seeking affordable housing — underwritten by government sponsored tax incentives — to acquire nicer homes with “better views” than they could find in Israel. But the settlements are not the only form of encroachment. Maya Wind has researched what she calls “the economy of occupation” and she has concluded that there are four core elements:

To make the occupation palatable to ordinary Israelis and the rest of the world an ideological war is also underway, Wind said. She told the audience that the “victim mentality,” in part a result of the Holocaust and other examples of anti-semitism, is used to create a distrust of the world — a distrust that is “very harmful to the peace movement” in Israel.

Additional ideological underpinnings of the occupation and exploitation include the notion that the IDF is “the most moral army in the world,” Wind said. She said that this romantic representation of the IDF is accompanied by the myth that the Israeli government wants peace but “there is no partner.” Wind rejects this idea, noting that wherever there are people, there is a partner for the peace process.

The formal presentation was followed by a question and answer session.

An audience member asked about Americans who serve in the IDF. Netta Mishly responded, saying that Americans generally serve only a year as they are “not that useful” due to the language barrier — most Americans who join the IDF do not speak Hebrew.

Commenting on a significant fact, often overlooked in discussions about the occupation, Mishly said that more and more settlers are army careerists, attaining higher and higher ranks and being in a position to influence IDF policy and perhaps Israeli politics. This also hinders the peace process.

The most poignant moment in the evening arrived when the two young women discussed the cost of being a Shministim.

Noting that the refuseniks are the smallest segment — approximately 200 people — of the peace movement in Israel, Mishly pointed out that they support each other because they are ostracized. Responding to a question about whether their families support them, Mishly said no.

The lack of support for the political position taken by the Shministim does not, however, stop family members from supporting their children when their sons and daughters enter the prison system.

“They are still your parents,” Mishly said.

6 Responses to Refuseniks : Israel’s Shministim say ‘No’ to Occupation of Palestine