Richard Raznikov : Libya Falls (Or Was it Pushed?) 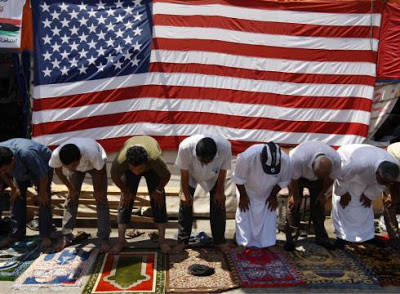 Which side are you on, boys…? Anti-Khadafy protesters pray in front of an American flag at Court Square in Benghazi, Libya. Photo by Hassan Ammar / AP.

The worst sin Moammar Khadafy committed was his refusal to accept dollars in payment for oil and his refusal to take the ‘loans’ proffered by the banks.

Uprisings, movements, rebels, insurgents, terrorists… people with weaponry and an interest in dislodging whatever government is holding power at the moment. If they are “pro-western” they are “democratic.” If they are anti-colonial, indigenous, and nationalistic, we have decided that they are terrorists.

Terminology. Not so long ago, there was nothing wrong with being an insurgent. It meant you were taking on the powers-that-be. Now it means you have an unhealthy interest in roadside bombs

Western media is vague when it comes to the type of government Khadafy was running and the system in place in Libya. This is because the Libyan standard of living was among the highest in the region, its health care excellent and free, its education progressive.

During Khadafy’s presidency, Libya developed the world’s greatest water project, provided universal health care, and used the nation’s oil wealth to give every newlywed couple an interest-free loan of $50,000.00. Khadafy was the region’s most progressive leader on the matter of women’s rights.

Libya has been a secular state, unlike some of the more radical religious nations which nonetheless support the U.S., such as Saudi Arabia. In fact, some elements of Al Qaeda are reportedly involved in the Libyan “revolution,” a fact about which the U.S. media and the U.S. government are not anxious to inform people. Too confusing, I guess.

As you may know, the Libyan “uprising” was stirred into being by the Central Intelligence Agency, armed by the U.S., and brought to power by the use of overwhelming air power, including drone missile attacks on a civilian population.

I don’t know very much about the claims being made against Khadafy in western media and by western politicians. I’ve heard these “he’s been killing his own people” charges before about every other leader America wanted removed. Doesn’t mean none of it’s true, of course, but much of what was said about Saddam Hussein, for example, turned out to be lies.

Also, what’s the deal with this “killing his own people” thing? Is that somehow worse than killing someone else’s people? Is it better if a Libyan child is killed by an Apache helicopter gunship than if she is killed by a stray bullet from a Libyan machine gun? Ask the child.

The Libyan story was clear from the outset. In early spring, a “rebel” force began attacking towns in the eastern part of the country. Khadafy responded by hitting them with rockets. This then provided the pretext for United Nations Security Council Resolution 1970, which authorized air power against the Libyan military “in order to protect civilians.”

Of course, the point was to prevent Khadafy from stopping the rebellion, specifically in the area of Libyan oil fields, and to give cover for the “insurgency.” In no time at all, the “rebels” concluded a deal for the sale of the nation’s oil, effectively privatizing the country’s most valuable resource which heretofore had belonged to the State. The oil deal was praised by Hillary Clinton even before the ink was dry, and probably before it was even written.

Based on the oil contracts, the “rebels” suddenly had financial resources which could be used to purchase weapons, mostly of American manufacture, although they took sometimes circuitous routes. Oddly, at the time the “rebels” sold these rights, they did not exactly own or control them; they were selling the prospect of them. But the purchasers evidently had reason to trust the deal because the real sponsors were not going to let the “rebellion” fail.

In the months which followed, Khadafy’s forces kept turning the “rebels” back, only to be hit with tremendous firepower. The “protect civilians” excuse was paper thin by then and nobody believed it. There were grumblings from putative western allies. But the U.S. was going to run this war and nobody was going to stop us.

It may be that this engineered “rebellion” was not just a matter of Libyan oil reserves. Prior to the “rebellion,” Libya’s production ranked it 17th in the world at approximately 1.1 to 1.6 million barrels per day, roughly 2 percent. It was of a particularly good, light quality, making it easier to refine and thus more valuable. Foreign operators who wanted to participate were required to work with the National Oil Corp., the nation’s own company. This kept control in the hands of Libyan nationals. But that’s not the only thing which troubled the U.S.

Libya had no debt.

To understand debt and the central role it plays in international affairs, spend some time investigating the banking industry and its toxic interconnection with international politics. Debt is the most important element in putting a nation and its people in the hands of corporations. The World Bank and the International Monetary Fund want you to owe them money; when you do, they can leverage control over your national resources, your political system, and your entire population. They can feed you or starve you, and they are quite ruthless about it.

The worst sin Moammar Khadafy committed was not his alleged human rights violations but his refusal to accept dollars in payment for oil and his refusal to take the “loans” proffered by the banks. This, coincidentally, was also the worst sin committed by Saddam Hussein, who had been America’s friend for many years — until he wasn’t.

It was of greater importance that the “rebels” borrow money to buy American weapons than the sale of the weapons themselves and whatever profit the arms manufacturers might get.

Want to see how the system really works? Check out the film The International, with Clive Owen and Naomi Watts. Or study the history of Argentina. Under Peron, Argentina declared itself bankrupt, shed its debts, and borrowed no more.

Consequently, its economy grew. It evolved a vibrant middle class, growing literacy, political independence. Then came the “reformers.” They threw the Peronistas out and privatized everything, proclaiming something the new regime called “the model.” The model borrowed money from the IMF for the great expansion which enriched the few at the top and screwed everyone else.

Let’s not get too carried away with the joy of “liberating” Libya. What we are witnessing may be its imprisonment. While Obama burbles about freedom, what he’s really celebrating is the victory of capitalism, and capitalism, though its propaganda conflates it with freedom, is in fact the enemy of freedom. It separates people from their own labor and indentures them forever to the corporations and banks, backed by the military and the civilian “authorities.”

I was so naive. I recall wondering why credit card companies kept sending cards to people who had no jobs, no cash, and no likely way of paying back what they were certain to borrow. I don’t wonder that anymore.

In The International, Owen and Watts are trying to stop a criminal syndicate involved in the arms trade with a major bank. An insider says to them that they can never succeed. Why? Because everyone’s in on it: the bankers, the governments, the syndicates, everyone.

I guess you can be on the outside of that system for a while, but if so you will probably end up like Khadafy.

1 Response to Richard Raznikov : Libya Falls (Or Was it Pushed?)