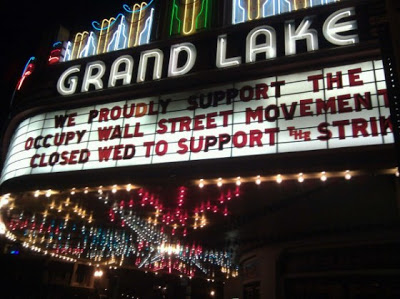 The historic Grand Lake Theater in Oakland shut its doors to join the General Strike. Image from ThinkProgress.
A festival of hope:
Oakland General Strike

OAKLAND — As I write this on Wednesday night, November 2, people are still massed at the Port of Oakland. This day of the Oakland General Strike has gone past like a dream. Something unimaginable just happened. The sleeping giant has awakened. This changes everything.

My thoughts right now are not political analysis — of the “line” of the demonstrators, of the impact on the elections, of the different tactics employed. I just want to bask in the moment, the feeling tone, of the day.

The way it went was this. Taking the bus towards downtown because there would be no parking. Getting off at 20th Street as the driver cheerfully told us that he would be turning here, could get no closer to City Center. Streaming down Broadway with a growing surge of people.

Getting to 14th and Broadway, running into Natalie outside of Oaklandish T-shirt store — which has closed for the day and set up turntables with full time DJ out front. Smiles and hugs. And here’s Greg and Chris, there’s Fatimah.

Joining a group of teacher friends, again unbearably big smiles. Wandering in the crowd, music and speakers. Every five minutes we run into people we know: hugs, high fives, and the same shared feelings, expressed only briefly, “Can you believe it?” “Amazing.” “Beautiful.”

Some of us have waited 30, 35 years for this day. Others have never seen such a thing. For some reason — being pushed to the breaking point by the greed of the wealthy, inspired by the audacity of the uprisings in Egypt and Tunisia, Spain, and Greece — this has finally broken open. 10,000 strong. Or more. Who knows?

I hear elders like myself begin, again and again, to offer advice — but then we clamp our hands over our mouths. No telling these young people how to do it. We tried our best these 35 years and failed. Whatever they are doing, they have the key thing right and let’s just learn from them.

Encountering former students who run up, proudly greeting their teachers, as if to say, “Yes, we’re here, we are finally doing what we talked about in class.” There’s Becca and she’s with her younger sister, just a freshman in high school. Beaming.

Something about the last decade, decades really, gave rise to a kind of sleight-of-hand postmodernism, a philosophy which posed individual resistance but ridiculed mass action or hope for major change. This last period made our primary form of commentary the comedian, the master of irony and sarcasm, who would at least help us endure the dark times.

Ah, but this is changed utterly. Mass mobilization in the streets changed that. Cynicism must give way to hope, alienation to commitment.

It’s hard to keep our posse together as we move around the downtown area. Marches are constantly leaving the center and heading to different banks and institutions of the one percent. Others are arriving — once a large contingent from Berkeley, another time a huge Teamsters semi blasting “Solidarity Forever.” I am mostly with Berkeley High and CAS folks; Ilene with Envision Academy colleagues. We join and separate in this direction and that. Then our daughter Sonia texts — she has gotten off work and is parked nearby, making her way in. Hooray!

Another wonderful thing: yes, there are some printed signs, made by unions or community organizations; there is a beautiful silk-screened poster that proclaims “Hella Occupy Oakland.” But there are thousands of little hand-made signs, on poster board or flattened cardboard boxes — little individual expressions, each person’s best thoughts on the moment. Strung together, they are like poems – beautiful words bobbing and swirling past.

At different points there are dance performances. A Brazilian group that we saw last week at the encampment, killin’ it to the drums, drawing in the crowd. Destiny Arts youth combining dance and martial arts. Some artists, like Boots Riley, have not only performed but have joined the work — soldiers in the struggle.

We run into our pal Lincoln — sitting on the curb with his sister. A movement poet since the 60’s, he has a beatific smile and a big hug. He turns around and shows a big sign on his back, “At last.” Nirali comes by — showing us the baby-march signs. She says there is a “pre-school teach-in” on Friday morning. Nearby shops have signs — solidarity with the general strike; open but taking no corporate credit cards.

A movement is a living organism. It grows and adapts. The day after the police teargas and rubber bullet attack on the demonstration, we had regathered in Oscar Grant Plaza. Walking by us were three young women carrying a banner. Each one had a gas mask slung around her neck, ready to deploy. We grow and adapt.

The narrative has changed. We are not just having a discussion. All of the people who have been horrified by the direction the country has been on — by the endless imperial wars, the disgusting global theft, the rape of the earth, the attacks on immigrants, the war on women, the racism of our wealth gaps, the destruction of our schools, the slave system of our prisons, the arrogance of the super-rich — we always knew the other was there, we always saw each other. But we all looked at each other, shook our heads, and sighed that we were powerless.

Now we are powerful. That is a genie that cannot be stuffed back in the bottle.

Later in the evening I teach my class in San Francisco. Driving home along the Panhandle I turn on the radio, KISQ 98.1. Out comes the beautiful voice of Jimi Hendrix, “Purple Haze,” a tribute to this city, to this Bay Area. A completely apolitical song, just a happy druggie song. But something else pulsates there. I am reminded of the 1960’s. A feeling of belonging, beyond alienation, home at last. A festival of hope.

[Rick Ayers was co-founder of and lead teacher at the Communication Arts and Sciences small school at Berkeley High School, and is currently Adjunct Professor in Teacher Education at the University of San Francisco. He is author, with his brother William Ayers, of Teaching the Taboo: Courage and Imagination in the Classroom, published by Teachers College Press. He can be reached at rayers@berkeley.edu. This article was also published at The Huffington Post. Read more articles by Rick Ayers on The Rag Blog]