Robert Jensen : The Vultures and the Hawks 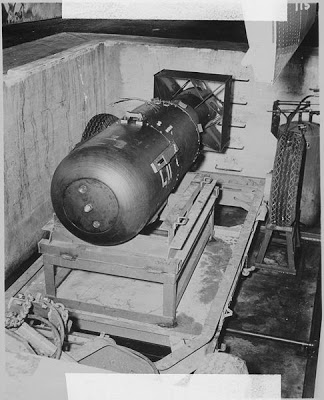 And the empire was off and running: The first atomic bomb (“Little Boy”) on trailer cradle in pit. Photo from Wikimedia Commons.
Think outside the bomb:
No nukes? No empire.

That means working toward a world free of nuclear weapons demands we not only critique the reactionary wing of the U.S. power structure, the Bushes and Cheneys and Rumsfelds — call them the reckless hawks. A serious commitment to a future free of nuclear weapons demands critique of moderate wing, the Obamas and Bidens and Clintons — call them the reasonable hawks.

The former group is psychotic, while the latter is merely cynical. After eight years of reckless reactionary psychotics, it’s easy to be lulled into a false sense of security by reasonable moderate cynics. But we should remember that a hawk is a hawk.

The next step is asking whose interests are advanced by the hawks. Even though in the post-World War II era the hawks have sometimes differed on strategy and tactics, they have defended the same economic system: a predatory corporate capitalism. Let’s call those folks the vultures.

Different groupings of hawks might be associated with different groupings of vultures, giving the appearance of serious political conflict within the elite, but what they have in common is much more important than their differences. The political empire of the contemporary United States serves the corporate empires that dominate not only the domestic but the global economy, and it all depends on U.S. military power, of which the nuclear arsenal is one component.

George W. Bush was the smirking frat-boy face of the U.S. empire. Barack Obama is the smiling smart-guy face of the U.S. empire. Whoever is at the helm, the U.S. political/economic/military empire remains in place, shaky at the moment, but still the single greatest threat to justice and peace on the planet. Any serious project to rid the world of the particular threat of nuclear weapons has to come to terms with the more general threat of the empire.

We shouldn’t expect our leaders, Republican or Democrat, to agree with that assessment of course. And they don’t. Here’s a paragraph from the Obama administration’s 2010 Nuclear Posture Review:

The conditions that would ultimately permit the United States and others to give up their nuclear weapons without risking greater international instability and insecurity are very demanding. Among those conditions are success in halting the proliferation of nuclear weapons, much greater transparency into the programs and capabilities of key countries of concern, verification methods and technologies capable of detecting violations of disarmament obligations, enforcement measures strong and credible enough to deter such violations, and ultimately the resolution of regional disputes that can motivate rival states to acquire and maintain nuclear weapons. Clearly, such conditions do not exist today.

Nowhere on the list is a recognition of a more crucial fact: nuclear abolition depends on the death of the American empire.

The reason that is not on the list is because nuclear weapons are a key component of U.S. empire-building. That is as true today as it was when Harry S. Truman dropped the first nuclear weapon to end World War II and begin the Cold War. Although tonight we want to focus on the present, it’s useful to return to that moment to remind ourselves of the harsh reality of empires.

Though the culture can’t come to terms with this history, the consensus of historians is that the U.S. decision to drop atomic weapons on Japan had little to do with ending WWII and everything to do with sending a message to the Soviet Union. The barbaric act that ended the barbarism of WWII opened up a new chapter in the tragedy of empire, leading to more barbarism in the U.S. assault on the developing world over the past six decades.

Even though it was clear that after WWII the United States could have lived relatively secure in the world with its considerable wealth and extensive resources, the greed that drives empire demanded that U.S. policy-makers pursue a policy not of peace but of domination, as seen in this conclusion of the State Department’s Policy Planning Staff in 1947: “To seek less than preponderant power would be to opt for defeat. Preponderant power must be the object of U.S. policy.”[1]

Preponderant power means: We run the world. We dictate the terms of the global economy. Others find a place in that structure or they risk annihilation. No challenge from another system or another state is acceptable.

In service of this quest, elites created the mythology of the Cold War — that we were defending ourselves against a Soviet empire bent on destroying us — which was grafted easily onto the deeper U.S. mythology about a shining city upon the hill and Manifest Destiny, about the divine right of the United States to dominate.

As a result, much of the U.S. public is easily convinced of the righteousness of the U.S. imperial project and persuaded to believe the lie that we maintain nuclear weapons only as a deterrent. The reality should blunt the self-congratulatory instinct: U.S. nuclear weapons were created to project power, not protect people.

In his book Empire and the Bomb, Joseph Gerson lists 39 incidences of “nuclear blackmail,” of which 33 were made by U.S. officials.[2] That helps explain the subtitle of his book, “How the U.S. Uses Nuclear Weapons to Dominate the World.”

Not surprisingly, Obama has said he does not envision abolition in the foreseeable future. In his famous Prague speech in April 2009, he said:

So today, I state clearly and with conviction America’s commitment to seek the peace and security of a world without nuclear weapons. I’m not naive. This goal will not be reached quickly — perhaps not in my lifetime. It will take patience and persistence. But now we, too, must ignore the voices who tell us that the world cannot change. We have to insist, “Yes, we can.”

That’s why most U.S. elites are interested in non-proliferation, not abolition. The goal of abolition will remain safely out of reach, on the horizon, just beyond our ability to accomplish in the near future — while the United States continues to imagine a future in which the rest of the world accepts U.S. domination.

Since countries threatened by the empire won’t accept non-proliferation unless there is a meaningful commitment to abolition and a scaling back of imperial designs, the U.S. policy will fail. That’s because it’s designed to fail. U.S. policy is designed to keep a hold on power and wealth, and the people running the country believe nuclear weapons are useful in that quest.

That’s why the Nuclear Posture Review of the Obama administration is not all that different from the Bush administration’s, as Zia Mian (an analyst at Princeton University’s Program on Science and Global Security) pointed out at a gathering of activists preceding the May 2010 Nuclear Non-Proliferation Treaty Review Conference. That’s why Obama’s policy includes a commitment to nuclear weapons, conventional missile defense, and modernization of the nuclear complex. That’s why Obama is increasing expenditures on nuclear weapons, now over $50 billion a year, for modernization.

Our task is to make sure we aren’t conned by politicians, either those who push the fear button or pull on our hope strings. When we take up questions of military strategy and weapons, our task is to understand the underlying political and economic systems, name the pathologies of those systems, identify the key institutions in those systems, withhold our support from those institutions when possible, create alternative institutions when possible, and tell the truth. We may support cynical politicians and inadequate policy initiatives at times, but in offering such support we should continue to tell the truth.

I want to end by taking the argument one step further: Such critiques ring hollow if we don’t engage in critical self-reflection about how many of us in the United States have grown comfortable in these systems. We decry injustice but spend little time talking about how our own material comfort is made possible by that injustice. A serious commitment to the end of nuclear weapons, the end of empire, the end of a predatory corporate capitalist system demands that we also commit to changing the way we live.

We cannot wake up tomorrow and extract ourselves from all these systems. There are no rituals of purification available to cleanse us. But we can look in the mirror, honestly, and start the hard work of reconfiguring the world.

[Robert Jensen is a journalism professor at the University of Texas at Austin and board member of the Third Coast Activist Resource Center in Austin. He is the author of All My Bones Shake: Seeking a Progressive Path to the Prophetic Voice, (Soft Skull Press, 2009); Getting Off: Pornography and the End of Masculinity (South End Press, 2007); The Heart of Whiteness: Confronting Race, Racism and White Privilege (City Lights, 2005); Citizens of the Empire: The Struggle to Claim Our Humanity (City Lights, 2004); and Writing Dissent: Taking Radical Ideas from the Margins to the Mainstream (Peter Lang, 2002). Jensen is also co-producer of the documentary film Abe Osheroff: One Foot in the Grave, the Other Still Dancing, which chronicles the life and philosophy of the longtime radical activist.]

1 Response to Robert Jensen : The Vultures and the Hawks