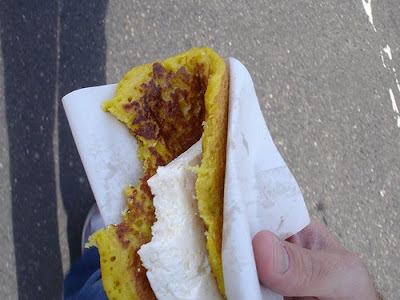 At the beginning of Hunger Street is a cachapa stand where I often breakfasted on corn pancakes. Margarita, the pancake maker, dresses her diminutive body in colorful clothing. She paints eyelashes and her high cheek-bones in the same color as her garb. Her smooth olive-skin face glistens. Her man and another de-husk the corn and scrape off the kernels. She grinds them in a small electric machine and then scoops up the grainy mass in her delicate, strong hands. Unlike tortilla makers, she pats the mass into a thick cake before frying on hot butter.

Palate and stomach satisfied with just one cachapa, I walked two blocks to the Cilento buildings where the Office of the Budget is located. I informed a secretary that the mayor had suggested I could come by to acquire a copy of the public document. Despite its public nature, she had to ask her boss who was not in. He told her over the phone that I had to go to the Office of the Municipality Council. On the bus, I listened to sing-song pleas for alms until stepping off in front of the government offices, an old colonial Spanish yellow building. Scores of people, many youths, walked about the spacious indoors or sat at desks wearing red or blue t-shirts with slogans for the Bolivarian Revolution. In one such office is one of the three existing copies of the budget, but before I could see it the municipal president had to approve and he was not in. I went to the public library.

“The mayor has not sent us one. We have never had a copy of the budget,” the head librarian told me. I looked up on the Internet but the municipality had no homepage. It took three days to catch up with the municipal secretary. He said my request was unusual and not easy to comply with given that there were so few copies. They couldn’t let theirs out of the office and it was not physically possible to copy several hundred pages. But I did glance through the tome. A secretary would copy the 20-page “general considerations” when she could buy ink for the printing machine. It took a week to get this summary. I have to conclude that, in fact, the public had no real access to their budget.

I could make out from the summary that the amount of funds transferred to “decentralized entities”—grass roots decision-making processes, in principal—was 17.6 million BF or 26.2%. Although not the 32% Rosa had told me, it was still impressive that ordinary people could decide the fate of over a quarter of the budget. Most of the budget not related to staff salaries was allocated in three areas: social development—where most funding had been decentralized—infrastructure and human resources. I needed to see the Municipal Controller for a more thorough understanding.

The controller is Argentina-born Guillermo Forti. In mid-1970s, the four young Forti brothers were on their way with their radical activist mother to the airport, hoping to fly to Venezuela where they would reunite with their father in exile, when forces of the military dictatorship arrested them. After some harrowing days, they let the brothers leave prison and Argentina but they kept their mother, whom they “disappeared”.

Guillermo graduated from law school in Venezuela and was elected to this important oversight position in Municipal Ribas. His brother, Mario, a studious Marxist-Christian-Astrologer was Rosa’s political advisor. Guillermo seemed to be an authentic overseer of funds, who had had run-ins with the mayor’s office for insisting that funds miss-allocated by some greedy members of a few community councils be returned. On the three occasions we met, he presented an overall view of the budget, which he concluded was generally well proportioned and utilized.

“These community councils are better than many in the country. A good example is that in some communities they used less funds than allocated to build water pumps, and the extra money went to other projects,” he told me.

“One of the chronic problems all Chavez municipal and state office backers have to contend with is the entrenched bureaucracies and officials and civil servants who skim what they can. Too many directors come from technical university backgrounds and there are too few with roots in the communities.”

I was amazed to hear politicians and civil servants speak openly of errors being made by the Chavez government and local supporters during my search to discover how well local government functioned and how well the infrastructure and social projects were advancing. This shows a healthy attitude towards leadership and building a better democracy. I heard many supporters of Chavez and Rosa voice critiques of their leaders in all government levels. Chavez was surrounded by too many people removed from the base and was pressured to moderate his drive toward socialism. The most common criticism of Rosa’s management centered on her naiveté, too much confidence in the good will of her people, failure to conduct management with a hard hand, too many advisors too removed from the grass roots, and employees more interested in acquiring expensive cars than in struggling for equality and progress for all.

Even top police officials wish Rosa were a tougher manager. Terry Rojas, chief of crime detective investigators (CICPC) for a five-municipality area including Ribas, told me frankly that Rosa was too kind toward those in her employ. “She needs an effective team, one that completes steps initiated.”

Chief Rojas produced figures indicating how common murder and vehicle robbery are. But he was optimistic that better coordination between Ribas municipal police and the investigative detective branch—something Rose had worked for—was improving recuperation of vehicles and detention of thieves. Eighty percent of stolen vehicles were recovered in 2007 compared with 60% in 2006. That year there were 94 homicides in Ribas; 79 accused murderers were arrested. In 2007, homicides were slightly down to 87.

If these figures represent reality, they defy what everyone told me: most criminals do not get caught or do not get imprisoned.

“There are far too many accidents and deaths due to poorly maintained roads, reckless driving, and insufficient traffic police,” Rojas said. He also confirmed what I heard on the streets: many cops take bribes instead of issuing tickets, and many also participate in robberies or take payoffs from criminals.

“There is only one prosecutor for this five-municipal area so our investigation and judicial process is all too slow,” he lamented.

The new Chavez government liberalized the legal code (COOP), in 1999, granting greater juridical rights to arrestees. Detainees must appear before a judge within 48 hours of arrest. Those not apprehended at the scene of the crime are to be released—there is no bail system—during the criminal investigation, unless the judge can determine that there is a great risk of flight. Their cases can take years to adjudicate and they are free to commit more crime, say police.

The radical mayor of Caracas, Freddy Bernal, told the media, “In each important crime committed there is a metropolitan policeman involved.” “There are officers who rent their arms to criminals”. (Quinto Día, January 25).

Because of the difficulty in convicting criminals some police also commit extrajudicial killings, reported at from 100 to 300 annually in this decade. Few cases get prosecuted as there is no system of independent investigation of police abuse.

In March, Chavez announced a “National Police System Plan”. For the first time in history police were to be unified. There was top-level resistance to this since most police units adhere directly under governors, who have traditionally appointed police chiefs. Political considerations often take precedence over combating crime and rooting out corruption. The hope was that police unity would increase arrests and criminal prosecution, and improve vigilance over police behavior. Murder is the key issue for most.

On the national level, Interpol shows 10,000 annual murders (2006), which equates to 33 per 100,000 population, one of the world’s top ten homicide rates. Colombia’s 32,000 non-war related murders is a rate of 70 per 100,000. Right-wing mercenaries commit several thousands murders against prostitutes and homosexuals, part of their ideological “social cleansing” politics. Para-militarists also cross the border into Venezuela to sell drugs and guns at low prices to youth gangs, part of their ideological battle to destabilize the progressive government. They also serve rich landowners and cattlemen by murdering poor peasants and unionists in the border area. National figures show 200 such murders in recent times.

Ribas municipal police chief, Alberto Navas, told me, “This is a very violent area, mainly so because it is close to the capital and a transitional stop for people from the most backward areas of the country. With the new prosperity for many, those with nothing flee these areas in search of jobs and better living conditions in the cities. If they don’t find this, many live from crime. Some parts of Caracas are the poorest areas and have the greatest amount of crime. Most murders are of young gang members. Our hands are often tied because witnesses fear coming forth, and modern laws and judges render too lenient sentences.”

Another reason for high crime rates among youths is the lack of recreation facilities and entertainment. There are not even movie houses in the whole of Ribas. Before Rosa’s time as mayor there were three but they closed down for lack of profits. Many say Rosa should allocate funds to rectify this problem. Rosa has increased police pay but it is still not a well paid job and one with risks of physical violence.

On a parting note on this grime theme, I cite a June 23, 2008 Reuters story:
“Venezuela’s youth orchestras and choirs have helped [300,000] children resist thug life…and now wealthy countries are lining up to emulate the system.”

Part of the government’s efforts to combat barrio gangs from trafficking in drugs, from committing thievery and murders is to get them interested in classical music. There are now 200 such orchestras. As part of the $35 million project, each player gets a free instrument. Governments in Scotland, Britain, and Los Angeles are copying the idea. Venezuela is using the program in its crowded and violent prisons as well. Trombones confront pistols in this peaceful revolution, peaceful, at least, from the government’s side.