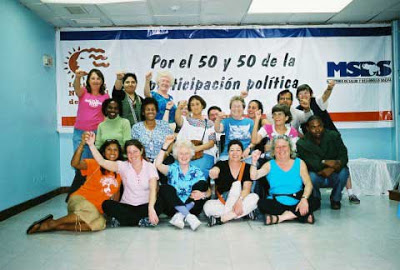 Sounds of Venezuela
Part IV: “This is the revolution of women”
By Ron Ridenour / The Rag Blog / October 3, 2008

What! Is that right? Did I hear Che?

Coming out of a liturgical dream or awakened by revolutionary chanting, I throw off my sheet, pull on my kimona and rush downstairs and out the door into pitch black darkness. A booming united chant pulls me around the corner. The people are struggling in ardent enthusiasm for the cause. My legs move quickly now, taking me toward the ever-moving revolution. The chant surges and wanes in the wind.

Ron Stop! Now! You are running in the streets in a kimona. People will not understand this. The chanting is far away now and if you did catch up with the cantors what would you do and what would be their reaction to you? Can you be one with them, a gray-haired man in a blue kimona and sandals? They would be bewildered or insulted. No one will understand that you are driven with emotion hearing revolutionary chants.

I rush back as darkness begins to lighten. I pull on trousers and t-shirt and rush out again still in semi-darkness. The united voice fluctuates in volume. I’m reminded that these people are Catholic and some may be partaking in a sacred canticle. I see a man standing before a closed work center and ask him about the chanting. Does it have to do with evangelical spirits or the upcoming commemoration of the liberty of La Victoria, in 1814, by university and seminary students led by General José Félix Ribas?

Diego had earlier introduced me to a master sergeant at the military training base on the edge of town. The base was preparing a pageant of teenage girl beauties for “youth day”, part of the military-community solidarity policy. Diego’s friend’s daughter was a contender for “Queen of La Victoria”, and he invited me to attend. The evening following my crazy escapade, I entered the base plaza to see the show, feeling uneasy. Pretty girls sauntered about in high heels and white gowns, round buttocks vibrating, breasts pushed forward from low-cut necklines, they nervously caressed their long black hair. The audience milled about or sat on folding chairs, many drank Colombia’s Death Squads’ drink, Coca-Cola. Teenage boys and fathers watched the girls with pleasure and mothers smiled proudly.

Humans are filled with contradictions. Male-chauvinist inspired beauty contests continue to be popular. On the other hand, María León, president of the National Institute of Women, asserted, in an interview on Women’s Day: “This is the revolution of Women”. That same day, President Chavez announced a new Ministry of Women’s Affairs and named Ms. León its minister. She is unrelated to Rosa León, who was not even born when María took up arms alongside fellow members of the Communist Party against the oppressive regime of Rómulo Betancourt, in the 1960s.

By the summer of 2008, the new ministry had representation in most communities, helping the recently and newly created programs designed for women, including Banmujer—the world’s only government bank for women. It was established on Women’s Day in 2001 and has since granted small loans to two million women, mainly to help them in business ventures aimed at bringing them out of poverty and encourage participation in society. The ministry also has Meeting Points and Madres del Barrio. The “Mothers of the Barrio” Mission, started in March 2006, provides a monthly stipend (80% of the minimum wage) to poor women with children and who do not have full-time employment.

Women suffrage arrived late in Venezuela, 1946. Not until constitutional changes in 1960 were women formally granted equality under the law. It wasn’t until the 1980s, though, that women were allowed to manage their own affairs, including signing official documents without the approval of a spouse or common law lover. Women began organizing for equal rights, in the 1970s, but most efforts were based on signal issues, such as the right to abort. There were few female public leaders before Chavez won the presidency. In the1997 National Assembly, for instance, only six percent of the deputies were women.

With Chavez’ 1998 electoral victory, a new constitutional campaign was initiated and with women’s rights at its core. Thousands of proposals were forthcoming by women’s organizations. The new constitution of December 15, 1999 is the first in the world written in a non-sexist language, meaning that both genders are used in referring to positions and titles, and it is known as the non-sexist Magna Carta, because of establishing full rights and benefits in all arenas. All forms of discrimination, also in the home, are forbidden.

In the first Chavez-led National Assembly women deputies doubled and have since tripled. Thirty-eight percent of the work force is female as are 56% of university graduates. Six women have earned the rank of general. Six of the 15-member executive committee of the new Socialist United Party of Venezuela are women. There are 11 female ministers, making up forty percent of the 29 ministries. And most spectacular is that four of the five highest public leaders are women. Standing beside executive leader Hugo Chavez, women are the President of the National Assembly, leaders of the National Electoral Council and Human Rights Office, and Chief Justice of the Supreme Court (TSJ).

Inspired by the current female Chief Justice, a judgeship on the Supreme Court is an aspiration held by Rose León. Although she, and presumably most if not all of the beauty queen contestants, seek equality and power this does not prevent them from continuing some traditional sexual roles and with pink frills. Rosa, for example, affords herself the luxury—or affectation—of having her own bathroom in the offices where dozens of mayoral employees work. There are two bathrooms but the workers and visitors must only use one. A sign on one door states that this one is exclusive for Rose. Unable to resist the temptation, I used it. I found the light on—something a cleaning woman insists upon so that Rosa does not need to switch it on—and the toilet seat covered in pink clothe; a pink hand towel hung beside the immaculately clean sink. Nothing was amiss except my presence, which the cleaning woman let me know in no unspoken terms when I came out.

Throughout my two months exploring the Venezuelan revolution everywhere I spoke with people working or organizing the majority were women. Black women are more often political activists and community organizers than black men as is the case for indigenous women, who represent or are active among the some 50 tribes in the country. They carry out Mission Guaicaipuro, the program to restore communal land titles and human rights for the half-million indigenous peoples.

I did not witness any brute macho treatment of women and most women accompanied by men did not look down or fear to speak up. In fact, women are most outspoken and many are not shy about showing other aspects of themselves, such as gyrating hips and breasts springing forth, a sight fair to this dirty old man.

But, yes, there is violence against women, especially in the homes. And there are rapes; prostitution too. Prostitutes are offered free tests for venereal diseases by local clinics. The courts do not prosecute prostitutes. Many judges are women. The new women’s affairs ministry addresses both violence against women and prostitution through information, conferences at the community Meeting Points and hotlines for women abused by men.

The Bolivarian Revolution is truly a transformation for women, an empowerment that half the population is not about to let disappear.